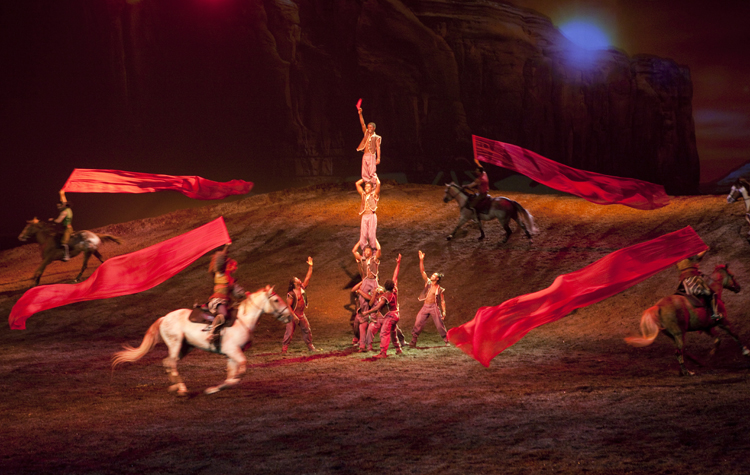 Ordinarily, I have reservations regarding animal-based shows and haven’t personally seen one since the early 1980s. But I’ve never thought that Odysseo by Cavalia would be as engaging in every sense its reputation has proceeded them in the show’s celebration of the histories between humanity and horses.

There’s a jumble of themes, places and timeframes at work in the two-and-a-half hour production that entertains nicely, held together by 22 riders and 40-odd horses involved in galloping, charging and cavorting about – and at times getting a bit frisky – through the natural representation in the independent spirit the company keeps their equines under the direction of Wayne Fowkes.

Among the many acts involved, the most noticeable are the Carousel act involving Chinese pole acrobatics of sorts through solos and duos on a rotating stage is a fanciful flight in itself, courtesy of the Guillaume Lord’s lovely set designs to the wild Western scene with lasso-looping lady and free-range cowboys tumbling and back-flipping around on stilts is almost comical to a point through the nimble choreography of Darren Charles and Alain Gauthier as a Guinean troupe provides an barrage of dance, music and antics about.

What keeps all this interesting is the straightforwardness of the storyline through the show’s numbers guided by equestrian director/choreographer Benjamin Aillaud, whether the horses sidestep in unison, do windmill movements, support celestial trapeze artists in billowing costuming or run free upon an elevated stage with little or no usage of reins (except for the horse riding parts) is amazing, for trained horses.

The world music score composed by Michel Cusson is kept in check with vocalist Claudia Paganelli drips with esotericism in all points, but a delight to listen to. Right up to its splashy farewell, it’s a fair, delicate and respectable balance between the two worlds of humans and horses Odysseo inhabits. Even though this is Cavalia’s second show since it got founded over twelve years ago, I’m looking forward to their next one and not just because I also love horses. 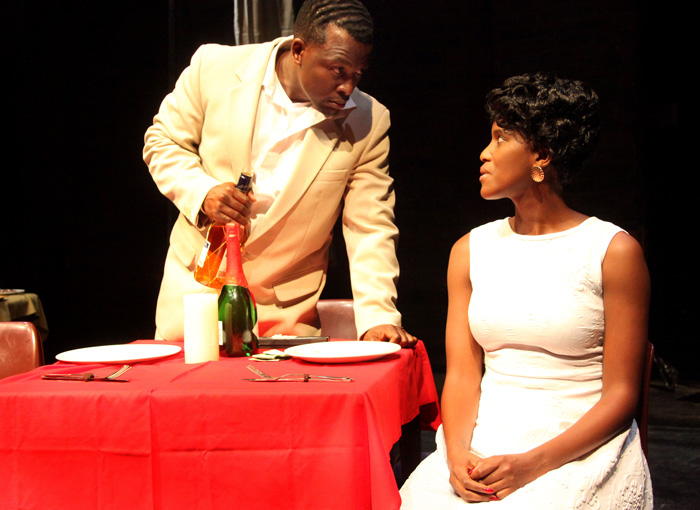 Going back to one of Athol Fugard’s earlier plays, Nongogo is just as daring and emotional now in regard to the crippling effects of racism that was apartheid that took root shortly after this play debuted in 1959 on people’s dreams of aspiration as part of Canadian Stage’s biennial month-long Spotlight series on this year's guest nation South Africa demonstrates.

In a township shebeen (equivalent to the African-American juke joint) run by Queenie (Masasa Mbangeni), travelling salesman Johnny (Nat Ramabulana) pays a visit offering his tablecloth wares for purchase one morning and strikes up a connection that thaws out her hard-heartedness in spite of herself and an awakening occurs. As they suddenly etch out bigger plans to expand on Johnny’s ideas of selling textiles, it’s being thwarted by Queenie’s former pimp-turned-liquor distributor Patrick (Hamilton Dhlamini) and hunchback Blackie (Desmond Dube) who want to keep her within their orbits.

Fugard’s work have always touched on the human side struggling under darker shadows and Nongogo is no exception about life interrupted by all the characters involved as given through James Ngcobo’s sharp direction and a rather down to earthy set/costume design work by Nadya Cohen and Wesley France’s dimmed by effective lighting.

Smattering English, pidgin English and Bantu languages in the dialogue, the cast delivered fine performances by Mbageni’s world-weary Queenie who tries to shed her former life and empty soul as briefly rediscovers her femininity and establish female empowerment; Ramabulana’s happy-go-lucky Johnny shines both philosophical optimism and ambition but with a uneasy self-esteem and Dhlamini schemes brilliantly of an insecure man unable and or unwilling to let go his manipulative behaviour. Perhaps more so devastating of a broken life is played by Pakamisa Zwedala as Sam, the township drunkard doing the play’s tragic clown awaiting the arrival of another mouth to feed in the abysmal conditions they all endure.

Pity that these plays are under short runs for an audience who can appreciate them a bit more since Fugard’s work doesn’t get seen often in Toronto, but at least one can enjoy while they’re around.

NEXT: Part 2 – Ubu and the Truth Commission. Spotlight South Africa continues through April 25. For tickets/information, call 416-368-3110 or visit canadianstage.com.