With the absence of former Toronto Jazz Festival Artistic Director and cofounder Jim Galloway, who died last December after a lengthy illness; you can feel the noticeable legacy he’s embellished to which he will get a more than well-overdue tribute at this festival, along with an all-star celebration marking what would have been Canadian piano great Oscar Peterson’s 90th birthday, the return of John Pizzarelli’s popular Radio Deluxe radio show and a whole slew of talent consisting of 1,500 artists coming for the ten-day summer music fête June 18 to 29, now in its 29th year.

Among the Toronto Star Stage events at City Hall will be the daily free Lunchtime Series June 20 to 27 will include Christine Jensen Jazz Orchestra including her big sister Ingrid on trumpet, the Ian McDougall Quintet and the aforementioned Jim Galloway tribute and the 6:30 p.m. Afterwork Series June 19 to 27 with details to be announced; the Koerner Hall (273 Bloor Street West) concert series brings in vocalese legend Kurt Elling (June 23), the return of NPR’s Radio Deluxe show with hosts John Pizzarelli and wife Jessica Molasky with their quartet and special guest local heroine Alex Pangman for a taping broadcast June 24 and super-hot young British jazz lion pianist Jamie Cullum to close out the festival June 29.

A much jazzier roster than in last couple of years of the festival, this is a pretty good setup and although the kickoff act to open the official free opening night concert June 19 has yet to be announced (I think I have a pretty good idea who it might be, but I’ll keep to myself – for the time being), this could be one of its best in quite a while. 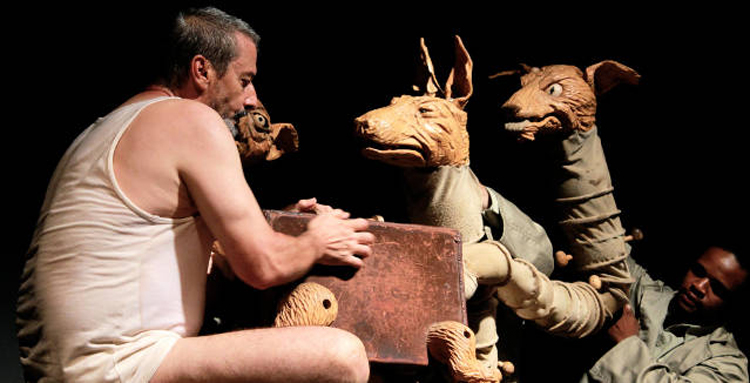 Restorative justice is a complicated beast to tackle when a society (re)joins the league of respectable nations in trying to right whatever wrongs were committed during darker times and the why on the lingering ghosts continuing to haunt its collective memory. Even two decades after the fall of apartheid in South Africa and a quarter-century since Nelson Mandela’s release that instigated it all, the nation still struggles with this that even the playwright for Handspring Puppet Company’s 1997 Ubu and the Truth Commission, which recently played at Canadian Stage’s Spotlight series; Jane Taylor has stated herself as “the consequences of which (the Truth and Reconciliation Commission) will take years to unravel. For all its pervasive weight, however, it infiltrates our culture asymmetrically [and] unevenly across multiple sectors.”

From the team that brought the fantastic adaptation of War Horse to life onstage, director William Kentridge forges a bit of street theatre, puppetry, animation and archival footage about the central character Pa Ubu (Dawid Minnaar), an buffoonish authority figure who prospered under the old regime along with his Cerberus-like dogs and compliant Niles the Crocodile creatures, suddenly finds himself under threat from the new era that looks to find closure which he fears he’ll be charged for crimes against humanity for all the bloodshed made upon township rioters and anti-apartheid activists during the 1970s and ‘80s.

That doesn’t stop his wife Ma Ubu (Busi Zokufa) from speculating that his activities involved infidelity – considering all the guilt weighing his conscience down and drowning it with booze and ritual showers to cleanse his nightly sins – until she finds out the real truth that disturb her even more; punctuated with real-life testimonies of the victims of apartheid who talk of corpses of their loved ones and the confessing perpetrators who committed them, as a buzzard looks on waiting to dine on the old wounds of the guilty and innocent.

Ubu’s dark, political humour digs deep of the Big Brother state that dominated South African politics for the latter part of the 20th century with some unsettling but necessary results it invokes in a fast and crazy pace easy to understand and absorb, while trying to reconcile these acts of pure evil that makes ones gut ache with pain and laughter all at once.

The acting duo of Manaar and Zokufa play it out wonderfully like a Punch and Judy-like couple battling out their own marital woes and shameful secrets with puppeteers Gabriel Marchand, Mongi Mthombeni and Mandiseli Maseti providing comic relief to Manaar’s wicked deeds. Kentridge’s direction, set designs and crude animation segments are definite highlights helped by the buoyancy of Warrick Sony and Brendan Jury’s meld of dramatics and South African township jive, Adrian Kohler’s inventive puppet and costume designs and stark lighting of Wesley France.

Ubu and the Truth Commission searches that elusive pursuit of justice that must also swallow uncomfortable acceptations like amnesty for those who completely or partial didn’t come clean for the sake of national harmony, that can at least find solace through such an exemplary and exceptional play in order to return back to humanity and self-forgiveness within in a luminous and engrossing manner.