Screenplay: James Gunn and Nicole Perlman; based on the Marvel comic book series by Dan Abnett and Andy Lanning

Say what you will about superhero flicks filling up the cineplexes nowadays, one has to admit they’ve come a long, long way since 1978’s Superman not only visually, but story-wise in their plots (most of the time). Mining the familiar characters of pop culture is one thing, yet trying to do that with an obscure, throwaway title from the Marvel comics stable like Guardians of the Galaxy would be a herculean risk-taker – and it works.

Cocksure petty bandit Peter “Star-Lord” Quill (Pratt) rummages across the Nova galaxy as a Ravager, a thieving group of aliens who abducted him as a distraught orphan from Earth 26 years ago and permanently fixated on the 1980s with a cassette Walkman full of classic pop mixtapes in hand; finds himself caught in the political landscape of his adopted Xander Republic home.

Ronan (Lee Pace), a vengeful warrior from the Kree Empire, isn’t quite cosy with the peace treaty his people have cut with the all-inclusive Xanderians after a millennium-long war and is out to settle old scores by sending his assassin agent Gomora (Saldana) to chase after Quill who’s successfully lifted a mysterious Orb from an ancient ruin that holds the key to his plans on behest of the mighty overlord Thanos, who has bigger plans for the Orb’s power within.

Entangled in a public fight on the Xander administrative homeworld between Quill, Gamora and the reckless racoon-like bounty hunter Rocket (voice of Bradley Cooper) and his Flora Colossus plant monster sidekick Groot (voice of Diesel), they end up on the maximum-security prison barge Kyln. Forming an uneasy alliance along with the hulking Drax the Destroyer (Bautista) who has a serious bone to pick with Ronan, they break out and head for the lawless colony of Knowhere to sell the Orb for a price.

Upon learning the true worth of the artefact that could have dire repercussions throughout the universe, these band of misfit outlaws now become the galaxy unlikeliest hopes of saving it from Ronan’s wrath.

Sort of a hybrid collision of The Avengers meets Star Wars, director/co-writer James Gunn’s (2004’s Dawn of the Dead) gamble pays off about a collection of rogues with so little in common, hidden agendas and personal issues to be able to answer a higher calling in their lives so stated in the script filled with all types of action, humour and thrills in a fast-paced setting.

Pratt makes the scoundrel Quill the de facto leader of this wild bunch not only with wit and charm, but also teaches them the benefits of unity and humanity as well keeping one step ahead of his ex-leader Yondu Udonta (Michael Rooker), the father-like figure with a bizarre sense of discipline. Saldana does another fearless heroine role (plus landing another plum franchise after Avatar and Star Trek) battling against Ronan and her adopted sister Nebula (Karen Gillan) and subordinate Korath (Djimon Hounsou). Cooper and Diesel almost steal the spotlight with the former being a hardened, sarcastic but technical genius of a golden-hearted antihero and the latter’s monosyllabic muscle of little brain and gentle soul, plus Bautista’s brutish Drax with no sense of metaphor, looking to find purpose with the rage he carries.

Seeing Guardians of the Galaxy in 3-D is worth the price tag along with the cameos of Glenn Close, John C. Reilly and Benicio del Toro’s super-cool if sadly brief role of Tanelee “The Collector” Tivan, doing a mischievous space-age portrayal of Liberace as a slick pawn shop owner is fun in itself. This is the summer thrill ride you’ve been waiting for, promising a sequel come 2017 at its end credits. Can’t wait for that!

Get on Up (Universal)

Long overdue, the biopic drama of funk master James Brown finally makes it to the big screen as Get on Up, helmed by The Help director Tate Taylor telling The Godfather of Soul’s life story in under 138 minutes is a lengthy, slightly formulaic run, but at least the subject matter is more than interesting to sit through. And since this is James Brown we’re talking about, it’s never a dull moment.

Cutting back and forth form his hardscrabble childhood in the backwoods of segregated 1930s South Carolina up to the early 1990s of an resurgence, the film bounces around from being abandoned by his parents Joe (Lennie James) and Susie (Davis) onto the doorsteps of his madam aunt Honey’s (Octavia Spencer) care, James Brown (Boseman) rises from the chitlin’ circuit to global superstardom by the mid-1960s.

A man way ahead of his time, Brown negotiates through the business of showbiz, a slew of women, tackling racism, drugs and ego trips amongst his band members from best friend Bobby Byrd (Ellis) who sticks with him through thick and thin, plus the many scrapes with the law for most of his life, contradictions with his faith and the sacrifices made in his career to get ahead, eventually cementing his immortal status still maintained since his death in 2006.

Taylor does a relatively good job giving The Hardest Working Man in Show Business a graceful due through seriocomic moments, fourth-wall breakouts and some historical footage for Get on Up while taking cues from other biopics like What’s Love Got to Do With It, Ray and Walk the Line, so it’s a bit of treading into familiar territory.

Boseman definitely inhabits Brown’s persona and showmanship very realistically enough to earn some Oscars attention and without falling into caricature in key scenes, like handling the racial tension running high at a Boston concert in the wake of Martin Luther King’s assassination with calmness to the wackiness of flying under fire during a USO tour in Vietnam and his imperfections as a husband, father and band leader. And you can’t tell if he’s actually lip-synching or really singing those chestnuts “I Feel Good” and “It’s A Man’s Man’s Man’s World.”

The rest of the cast also does well with Aykroyd being faithful manager Ben Bart standing by him on his business dealings; Ellis’ quiet poise living under Brown’s shadow and Brandon Smith’s standout portrayal of rival and friend Little Richard is minor, but it will stick with you and is a must-watch, as well as Nick Eversman’s mute role as Mick Jagger has whimsical effect (the real Jagger is also co-producer of this film).

Hitting all the main points, even if Brown’s brief jail time in the late-1980s is briefer than it’s shown here, Get on Up’s flashy, colourful cinematography by Stephan Goldblatt and Jez and John-Henry Butterworth’s warts-and-all script never loses cohesion does honour Soul Brother Number One decently enough. And who’s going to ignore such a rocking soundtrack of all his greatest hits, anyway?

Sculptor Serge Jolimeau is world renown for his folkloric works made from recycled iron gas cans hammered and cut almost like origami for large piece “La roi lion” and the bookending pieces “Chimère au poisson” and “Femme-sirène a L’Oiseau” as made in his studios in the northern Port-au-Prince suburb of Croix des Bouquet, along with smaller works “L’Ange,” “Le boeuf chimère” and “Le coq,” allowing the oxidation of the metal to give them more character. 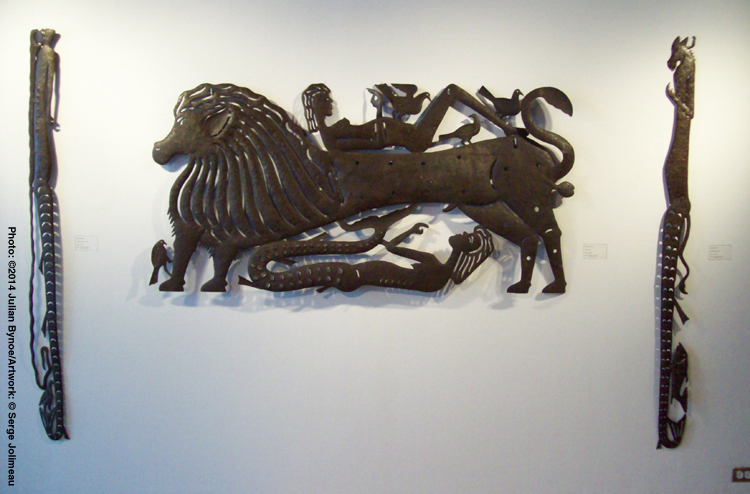 The very textural and folksy acrylics of Hilomé José have a more grounded aesthetic through his bright pastels of basic Haitian life for “Femmes à l’are” and “Ville Côtière” series that feel somewhat repetitive on the subjects, perhaps reflecting on the new freedom of expression after decades of the familial Duvalier dictatorship that dominated post-World War II Haiti, however brief it was. 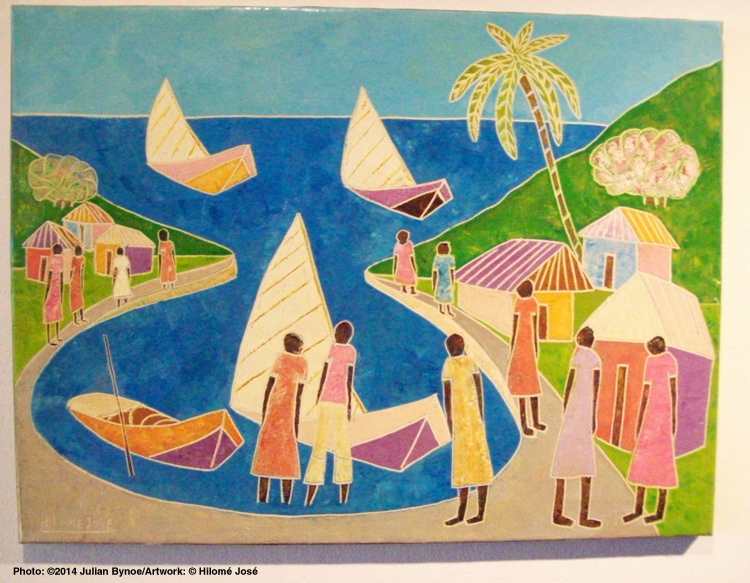 As a vodou priest, Lafortune Felix displays the more rural side of the countryside surrounded by its rituals, habits, the religions of vodou and Christianity finding harmony – or a basic truce – to exist together and aims for a deeper meaning with “Agouétaroyo,” “Yabofer,” “3 filles de Jupes (D’Égypte)” and “Sainte-Brigitte, portier du cimetière” to more historical figures (“Maître Ossange”) and events (“Expédition Devant Baron”).

With all these works made around 1990 through Haiti’s turbulent period of its transition to democracy (such as it is now), there lies the hope the impoverished state has endured in their 200-year history of revolutions, coups and counter coups, plus natural disasters, an indefatigable spirit unwilling to be crushed by the odds. Between Colour and Anvil’s a nice exhibit, although it could have represented some more artisans and disciplines.

Chalk one up for the veteran Haitian mizik rasin group Boukman Eksperyans, putting on the fiercest concert of the summer and a jam-packed WestJet crowd proved it during the long Simcoe Day Weekend festivities at Harbourfront that more than warmly welcomed them after a decade away from the lakeshore venue.

Led by husband-and-wife vocalists Theodore “Lolo” and Mimerose “Manzé” Beaubrun alongside backup vocalist Natacha Massillon, the rebellious band from Port-au-Prince threw in a bunch of familiars “Zanset Nou Yo,” “Pap Sa Blye,” “Ti Pa Ti Papa” and their latest hit from this year’s Haitian Karnival “Tuipe Ya Tuipe Yo’k Pou Wont” in their native French Creole with dancers Johanne Dejean and Johanne Colas doing their bump and grind onstage, whipping up a frenzy for the audience still running on the enthusiasm from the connected Toronto Caribbean Carnival Festival (or the diehards who still call it Caribana). 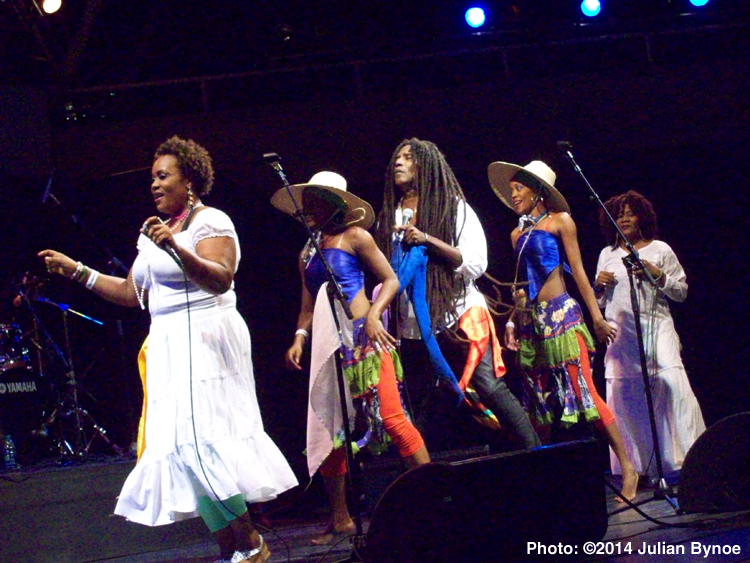 More than party music, Eksperyans’ lyrics are just as volatile slamming against government corruption, societal ills and the like through their charged-up tunes. However, they still found the time to let it all go during the closing a cappella rendition of the Haitian national anthem “La Dessalinienne.”

Opening act Djakout #1 got it all going from their compas pop material, including a bilingual cover of Ben E. King’s “Stand By Me” for their hour-long set, but the night belonged to Boukman Eksperyans. Let’s hope it won’t be another couple of years before they return back here.