Screenplay: Steven Knight; based on the Richard C. Morais novel

Like so many of those culinary-based cinema fares from My Dinner with Andre to Like Water for Chocolate, the Franco-Indian melodrama The Hundred-Foot Journey plays out as a battle royale between competing taste buds, culture and romance that knows where its going with any audience familiar with the formula, yet it is a tasty morsel.

Fleeing from sectarian violence and personal tragedy from their native Mumbai, the Haji family led by their determined, wise patriarch (Puri) throughout Europe and accidentally find themselves in the French provincial town of St-Arnauld to set up shop as the only Indian restaurant in the area in a fixer-upper, pitting themselves against a well-heeled local establishment run by the no-nonsense owner Madame Mallory (Mirren) across the street, approximately one hundred feet apart from each other.

Looking to undermine one another, middle son Hassan (Dayal) has a unique gift for cooking and develops an interest in French cooking from old cookbooks left behind in their place along with some new cookbooks given to him by the rival’s sous chef Marguerite (Le Bon), not to mention a little love slowly budding between them. Even when a near-accident caused by racial tensions brings the warring sides to a tentative truce, the potential is seen to find common ground and the passion for food does exist.

Back in the kitchen like he did in Chocolat, director Lasse Hallström bridges two cultures together through screenwriter Steven Knight’s likeable adaptation of Richard C. Marais’ 2010 international bestseller in the pacing, timing and context, not to mention Linus Sandgren’s masterful cinematography blending the subtle colours of the French countryside and the fiery palette of India without it ever clashing and A.R. Rahman’s score is exuberant enough to garner some attention come awards season time.

Mirren is deliciously snooty as the threatened restaurant owner who later changes her tune about her neighbours with warm, firm maternalism; Indian cinema vet Puri manages to mix humour, guff and wisdom for his part that’s a pure delight, as Dayal displays doe-eyed curiosity and optimism besides Canada’s Le Bon wanting to bond as much as she does to compete against him.

Sweet and pleasurable viewing, The Hundred-Foot Journey is a refreshing choice of summer fare that would have found a better place as a fall release, but its probably the best date film to sit for two hours this year, yet alone for the season.

Chicken Grease is Nasty Business! has attitude with a capital “A” written by Michael Miller as much as it defines the term of what family is in this crazy cocktail comedy-drama served up with a hilarity on the side that could make a Tyler Perry comedy (such as they are) green with envy.

The elderly proprietor of Modestine’s Chicken Delicious Modestine Smiley (Lili Francks) closes up her restaurant for a private function for her adopted son Dwayne’s (Danny Waugh) birthday party with a surprise: adopting an infant girl afflicted with HIV; much to the consternation of her sassy-mouthed friend and partner Pearl Jenkins (Karen Glave) who has to contend with Dwayne’s boisterous, god-fearing girlfriend Jolene Watkins (Sedina Fiati) with a surprise of her own to give at the party.

Thrown into this chaos are the other adopted son Delmar (Christian Lloyd), a totally unabashed drag queen that Modestine took in as a crack baby and Dwayne’s ex-flame Mattie Bains (Dian Marie Bridge), who left him at the altar on their wedding day months ago; shows up unexpectedly also with news, creating a ripple effect of whatever dirty secrets are revealed – and corrected – that could either keep this family together or apart for whatever old hang-ups linger around.

Peppered with catty comebacks and saucy dialogue, the play keeps it coming in its 90-minute ride as directed by Kim Blackwell although the pace is a bit quickened to a point where it’s almost blurry and can’t connect to who did what to whom in this dysfunctional family that couldn’t get any more fractured.

Francks’ motherly portrayal as the big-hearted Modestine is unconditionally disarming on how much love can a mother give when it almost seems certain she’ll lose faith in all she’s built on; Glave provides both as a cynical under-cutter looking to stir trouble. As Fiati, Waugh and Bridge’s love triangle surely leans toward the melodramatics, Lloyd standouts as the witty if insecure Delmar grappling with his own abandonment issues while hooking up with the man of his dreams (Jeremiah Sparks) is a charmer.

Mary Spyrakis’ set designs remain simple yet functional under the lighting of Gabriel Cropley (and you got to love the gay rave bridge inset to choreographer Monica Dottor’s moves and Beau Dixon pulling out a dance remix of Whitney Houston’s “How Will I Know”) to the knee-slapping antics of Chicken Grease is Nasty Business! that should be expanded to a large audience.

In its concept of placing classic Mexican cinema, opera and a mariachi band to create a contemporary Western out of El Jinete – A Mariachi Opera doesn’t sound like a bad idea. What could have been better is the execution in the technical section (which does work when it does) and careful thought laid out in the arrangement of its storyline.

As put on by Puente Theatre, it begins with a five-piece band with the lead singer serenading his lady love in Mexico that leads them to the altar, only to be thwarted by a jealous rival who ends up putting a bullet in his heart and stealing his newlywed bridge across the Texan border. Still alive if barely, the mariachi flits between purgatory and living with the only thing that keeps him going: following them into America to rescue her and exact his revenge.

Granted, the music is great weaving joy and melancholy, some inventive production design by Jamie Nesbitt and Florence Barrett’s costuming keep it within character here. It’s the middling second act of the two torn-apart lovers lonely and lost in the culture shock of America that drags the play down which eventually gets saved in the expected tragic ending writer/director Mercedes Bátiz-Benét wrangles out of it. And having that first act ghost dance sequence behind a gauzy drop screen didn’t help matters, either.

What partially saves El Jinete is, once again, the music, the play’s symbolism, poking at Americana and its splendid casting, especially Alexandra Wever dishing out emotive sorrow in her singing. A bit more though into its layered plot and a tighter production (the date I reviewed this show was plagued by many technical delays. I understand stuff like this does happen on occasion, but I admit it kind of spoiled the experience) would have made it more enjoyable.

History dictates that any revolution, even a successful one, is never perfect, as any society rising above an old order can navel-gaze at its triumphs and mistakes, Madam Mao does so from two generational perspectives in a cohesive and terse-brimmed drama over one polarizing figure of modern Chinese history and the need to surge old sins.

Set in a solitary prison cell somewhere in 1991 China, a young sergeant interrogator (Samantha Wan) comes to extract a confession from Jiang Qing (Janet Wo), widow of Mao Zedong and supposed leader of the infamous Gang of Four. Still reeling from the 1989 Tiananmen Square debacle and looking for a public distraction, the Beijing Politburo drags out Jiang after 15 years to make her repent for her (or rather their) crimes committed during the Cultural Revolution.

Over a week, the interrogator forces Jiang to relive old and often painful memories of her life on how a runaway from Zhucheng became an Shanghai actress and Mao’s wife during the guerrilla campaign against the Nationalist government to the most powerful – and feared – woman in the country to control young ideologues into Red Guards over a decade-long purge of real or imagined opponents in order to secure her personal agenda that went too far for the 1.5 million lives lost, with her only defence: “I was Chairman Mao’s dog. I bit whomever he asked me to bite.”

Through dance, mime, martial artistry and drama, Madam Mao comes not to put a sympathetic scrutiny on Jiang or redirect the faults of the Communist Party out to further scapegoat an dying old revolutionary Wo channels with fortitude to almost a human portrait, realising her disappointments as a proto-feminist of her era, as well as an egotist in her role in history. Wan makes a fine counterpart unaware of her country’s dark past while privately admitting her own guilt she must live with. When these two antagonize each other, Jiang’s quote comes to ironic light: “People are full of contradictions.”

Director Severn Thompson puts a lot of zeal and humour through the hour-long play in the tiny Theatre Centre’s Incubator for Live Arts (and they’re not kidding!) to give that quasi-confining feel of a prison cell is fitting, yet allows a full freedom of movement and colour from Amanda Wang’s set/costuming designs and the haunting score of Heidi Chan under Thompson, Wo, Wan and Paul Thompson’s crack script effortlessly.

Madame Mao not merely just pulls back the curtain of history’s darkest chapters as its does to show the price of naked ambition gone overboard on one woman’s downfall like an Asiatic Lady Macbeth. A must-see. 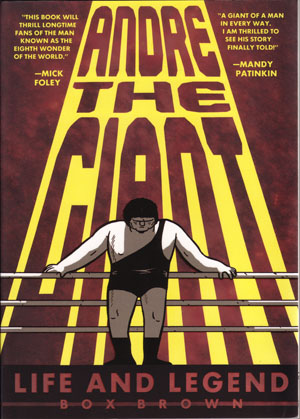 Andre the Giant: Life and Legend

A towering figure more ways than one, Andre “The Giant” Roussimoff holds a special place in the professional wrestling pantheon but had a gentle, if troubled soul in the early days of the sport long before WWF came onto the scene to make it more of the spectacle than it is now. Ignatz Award- and Xeric Grant-winning cartoonist Box Brown salutes his childhood hero in the biographical Andre the Giant: Life and Legend of the dignity and pride that one can bestow upon him.

Intersected with interviews from wrestling colleagues and friends like Blackjack Mulligan and Terry “Hulk Hogan” Bollea to filmmaker Rob Reiner, the book recalls his boyhood days in Molièn, France who was already 2.23 metres (7’4”) and 226 kg (500 pounds) by the time he was 12 and muscle bound due to his gigantism caused by acromegaly, which caused his enormous growth and prematurely aged his body when he died in 1993 at age 46.

Seeing a talent in wrestling while working as a Parisian moving man in the late 1960s, Andre rose quickly in the ranks and touring the world where he earned his professional name, along with a penchant for alcohol and picking fights outside the ring with his opponents and usually portrayed as the villain fans loved and loved to hate. But underneath it all that bulk and ringside theatrics, Andre was a true gentle giant who was very lonely and constantly bullied all his life over his size despite the fame and fortune he amassed. His condition worsened with onset arthritis, making him more withdrawn, reflecting the strained relationship he had with his only child, daughter Robin Christensen Roussimoff, from a previous encounter that he saw just four times in her life.

Brown’s black-and-white tonal art puts simplicity on a complex individual in this seemingly honest, unsentimental look at Andre the Giant dosed with light drama and humour. Although the author plucks some of his sources from DVD commentaries he often refutes yet sticks to as fact and a TV tabloid story (really, Inside Edition??) it’s interesting to read the laughter and emptiness about him, preferring his quiet life on his North Carolina ranch than the circus he endured.

Andre the Giant: Life and Legend paints a rational portrait of a sports entertainment star whose presence still looms large 21 years after his untimely passing in easy, understanding language uncluttered by visual detail and a basic pace thread to read. 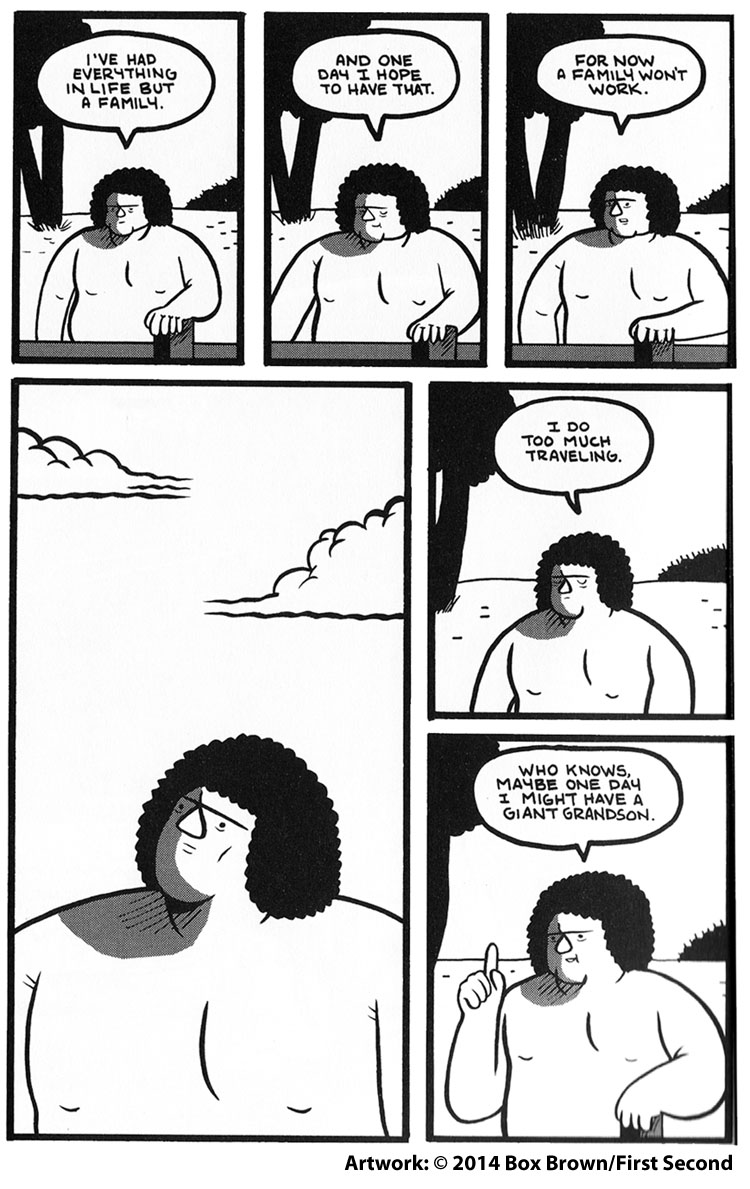