Niggaz Wit Attitudes, or as the world knew them by their acronym N.W.A., were one of the pioneering hardcore rap groups of their time and paved the way for others to follow like 2 Live Crew, Bone Thugs-N-Harmony to Eminem; get their long-awaited biopic Straight Outta Compton – the title taken from their auspicious 1988 debut album – with a warts-and-all treatment that hard hits and never misses.

Funded by Easy-E’s drug peddler money, they cut their first song “Boyz-n-the-Hood” and get discovered by veteran music manager Jerry Heller (Giamatti) who sees potential in the gangsta rap group and lands them a serious recording contract to be able to launch Straight Outta Compton, including the trademark anthem that made them a household name (and the ire of law enforcement agencies) everywhere, “Fuck tha Police;” where they’re constantly having to defend their freedom of speech versus the media and mainstream public who simply didn’t grasp the worldview realities of inner-city youths N.W.A. was talking about and focused only on the “glamourization” of drugs, misogynist sexism and violence in the lyrics.

With the infamy and fortunes that followed, comes the usual discontent from Ice Cube and later Dr. Dre in not getting a fair share of the business handled by Easy and Heller by 1990 that leads them into solo projects, legal wrangling and diss songs that led to N.W.A.’s eventual break-up and later introspection on their brotherhood that made them legends.

F. Gary Gray’s raw, unflinching direction and camera work makes Compton as incendiary as the music, perfect for a film of this magnitude and attitude (the opening scene involving a tense drug deal and following vice squad raid is the chillingiest I’ve seen in a long while), drenched in sepia hues and dark tones courtesy of Matthew Libatique’s cinematography in keeping the edginess throughout, including its more subtle moments when Easy’s untimely 1995 death from AIDS at age 31 on the eve of a possible reunion album; becomes the pivotal and humanistic point here as written and handled quite deftly by Jonathan Herman and Andrea Berloff’s teemingly solid script.

The casting couldn’t be any better with Jackson Jr. (Ice Cube’s real-life son) brilliantly portraying his father, Hawkins as the innovative perfectionist Dre and Mitchell shining bright as Easy-E for all to be serious Academy Award contenders; R. Marcos Taylor showing off the ugly side of ambition and power drunkenness as the ex-bodyguard turned (now-embattled) producer Suge Knight that Dre partners with the rise of the Death Row Records label and bringing in new talents Tupac Shakur (Marcc Rose) and Snoop Dogg (Keith Stanfield); Giamatti upends fairly well as a meaningful manager and champion for NWA, but skimming more than his fair share in the end.

After the heart-tearing music bio-documentary Amy on Amy Winehouse earlier this summer, Straight Outta Compton wields a big, blunt sledgehammer commentary over racial politics by five young African-Americans who dared to tell the brutal truth on the flipside of the American Dream, both experiencing the sweetness and bitterness of the music industry, that still rings true. Highly recommended.

The deluge of the superhero genre cannot be avoided, including the theatrical stage. But in the homegrown musical parody of the genre, Mapleman: Canuck Crusader!, as performed by the Mississauga Woodlands School it takes it with a differing twist as a double-edge satire on our national character (with a little character assassination) and capitalism held some promise for a amateur production.

The titular hero (Benjamin Gormley) is out and about protecting our home and native land from the evil doings of General Napalm (Cameron Scott), who’s backed the mysterious American industrialist known as the Broker (Martin Ffrench) out to wipe out our most precious resource – maple syrup – and flood the market with low-grade high fructose syrup.

With the weak Prime Minister Jean Poutine (Warren Moore) in his back pocket and his seductive wife Nellie (Racula Petria) in his pants, the Broker kidnaps and discredits Mapleman in the eyes of the citizenry, plus straining Québec/Canada relations in the process; yet only Mapleman’s sweetheart Winnie Trainer (Marie Kowdrysh) and a few patriotic believers can save him and the nation.

Since this is a play written and performed by junior and senior high school students, it is for what it is with over-the-top acting, some okay songs that could use a bit more polish to them and low-fi production values like an average school play does. But Mapleman’s sophomoric humour does hit it right on the nail when it does whenever we’re laughing at ourselves and/or our Americans cousins on social, political and cultural values (or lack thereof) and the cast does put in a lot of energy and innuendo for the one-hour show.

Mapleman: Canuck Crusader! probably doesn’t have (off-)Broadway potential, however Nam Nguyen’s book and Nikhil Gupta and Kevin Yue’s direction do show promise in other future stage endeavours and for SummerWorks to feature a family-friendly production in its roster is not only rare, it’s courageous for these kids to pull that off in a major theatre festival. 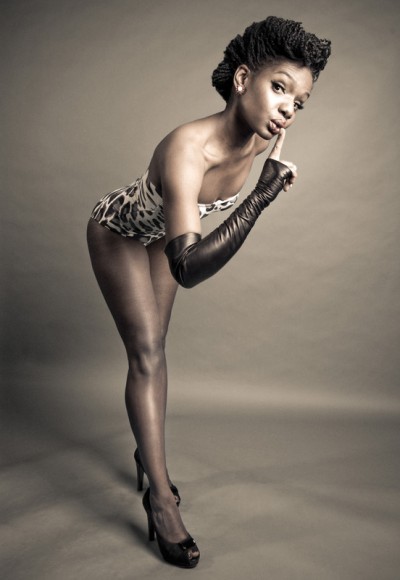 D’bi young antiafrica directs Ngozi Paul for her one-woman comical manifest of identity, The Emancipation of Ms. Lovely, taking pot-shots at societal idealized beauty and the female body politic in hilarious fashion through dramaturge and dance under 90 minutes that is liberating and revealing through its motions.

As the heroine Lovely (Paul) searches for “pre-slavery” love in all the wrong places from adolescent crushes to one-night stands, she also channels in between the 19th-century South African Bantu woman Saartjie “Sarah” Baartman a.k.a. “The Hottentot Venus” who underwent racial, sexual and cultural exploitation of her own body in the museums of Europe, even put on display for 200 years after her death.

Vanity and (in)sanity floods her unsatisfactory love life constantly, conflicted from a religiously repressive West Indian grandmother and dark family secrets, until her encounters with Baartman’s spirit allows her the courage to accept herself and embrace self-love.

Winner of this year’s Spotlight Award for Performance, Paul gives an all-perspective account on these themes running about Lovely in her monologues (the Baartman segments are the most poetic) and flowing choreography by Roger C. Jeffrey under the music of Waleed Adbulhamid and L’Oqenz AKA Non to laugh at herself and women that have had their own struggles with relationships, body image, gender and racial stereotypes, as helmed by antiafrika’s free and spirited direction in one woman’s journey towards female empowerment rises up from the ashes of love.

Being it the fest’s 25th anniversary season, their visual arts component of archival material collected over the years briefly displayed at the second floor Artscape Youngspace, a former school-turned-community arts centre, was a scant one at best from posters to programmes, but they at least was colourful and proud of itself as it should be.

From the simple, abstract artworks that have become their calling call over the years were sometimes playful and sometimes polemic in reflecting the times each successive year. One particular example were the 2011 theme of censorship when Canada Council arts funding were severely cut due to works considered controversial in their eyes, when one play about terrorism was put on by SummerWorks the previous year; and a “subtle” response to the cuts were depicted in the bold designs as familiarly created by Monnet Design.

A few comments by past performers and staff members on reflecting on what SummerWorks has meant to them and the cultural fabric of Canadian small theatre make for some interesting afterthoughts in the difficulties and joys in putting on the festival was a quiet approach that could have gotten more attention and publicity, nonetheless provided a glimpse behind the stages and scenes.

The festival organizers put on a fitting fest in marking their 25th anniversary season with the varied subjects they tackled, which included the Audience Choice Award winner The Living on war victims rebuilding their shattered lives. The Emancipation of Ms. Lovely and Lac/Athabasca both should have a stab at a regular theatrical runs as the best pieces and while I did enjoyed the anniversary art showcase, it could have indulged viewers a bit more than just a few pieces with some archival photos from past shows or had a proper event timeline display. SummerWorks did another successful and provocative roster that should keep them going for another quarter-century more for the Toronto theatre realm. In the Unlikely Event

Six years in the making and after a seventeen-year hiatus from publishing, Judy Blume presents her period melodrama In the Unlikely Event of three generations of families, friends and strangers connecting after a series of disasters in the most unexpected outturns she weaves with impeccable flair and a touch of nostalgia of a long bygone era that almost slips alongside our own in the post-9/11 world, yet with a bit more simplicity.

Based on factual events of the winter of 1951 to 1952 in Elizabeth, New Jersey – where Blume herself was born and raised in – three commercial airliner crashes occurred in and around the city near Newark International Airport in a successive row, creating a huge panic amongst the local populace into what may be causing them: pilot error, mechanical failure, alien intervention or a Communist plot (this was the Cold War/McCarthy period, after all) involved in any or all of them.

Among them is the central character Miri Ammerman, just fifteen years old and the only child of her single mother Rusty, living with her widowed grandmother Irene. She’s got her own set of growing pains, dealing with being born out of wedlock from a teenaged affair of Rusty’s years ago and the stigma it carries; her best friend Natalie Osner, a talented dancer who becomes obsessed with her craft after being “possessed” with the soul of a young dancer who perished in the first crash; being in love for the first time with Mason McKittrick, a orphaned boy from the wrong side of the tracks out to prove himself worthy and trying to cope with the chaos surrounding her as well as finding out that the American postwar suburbia and the nuclear family she often sees and envies of, isn’t as rosy as it looks on the surface.

Helping Miri find her voice in all this is her beloved journalist uncle Henry, a local reporter for the Elizabeth Daily Post, who makes a name for himself in covering the accidents. With other acquaintances, new relations get built on and old ones get either stronger or crumble along the way and all learning the lesson that life does go on, although it will never be the same again, for better or worse, on however one takes it.

In the Unlikely Event is Blume’s finest storytelling in quite a while, and not just because of the decade-and-a-half absence; in capturing in minute detail on the true-life events she bases the backdrop of the book upon and the lifestyles and society norms of the era of rigid family values, from one young couple married in secret from her conservative Greek parents to attitudes towards women’s roles and the challenges made against them. In this epic treatment, she hasn’t lost her knack in making believable characters and situations feel about as alive in the pages.

Historical dramas involving plane crashes usual don't make the ideal choice for summer reading material (or on planes either), but In the Unlikely Event is far from uneventful in composition and pace without too much sentiment for what could be (but hopefully not), at age 77, Blume’s swan song book. If it is, she surely does goes out on a high note for an author of her exceptional calibre. One of the year’s best reads.