Damn, he was funny… 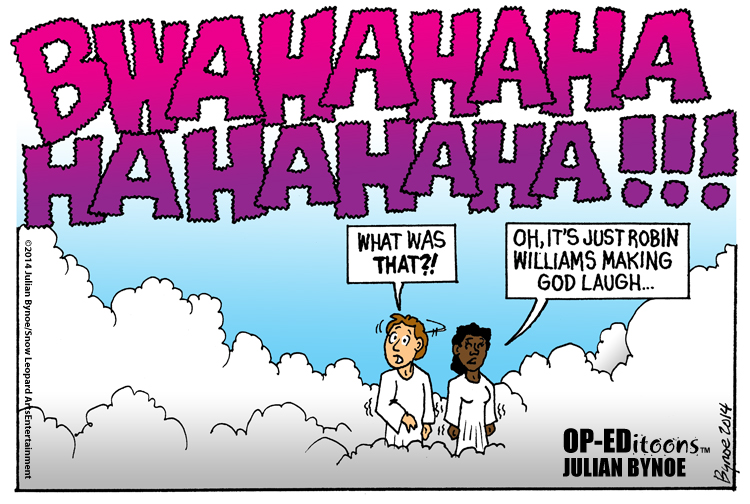 This can also be seen on my editorial cartooning page, OP-EDitoons.

Despite the off-putting title, Unintentionally Depressing Children’s Tales is actually a unexpected charmer of a adult puppet show that’s not-so adult in nature but grounded in the realism of the world and life in general presented by the Caterwaul Theatre group of its quaint, if twisted theatrics told in five short tales in under a hour, that I wished could have gone on a bit longer.

“A Light Well-Lit” regales about the “real” inventor of the light bulb, Arthur B. Wilson, who illuminated his hometown plagued by eternal darkness for the last 400 years, only to find it more of a curse than blessing to its inhabitants; the semi-tender story of “Heathcliff” speaks about a namesake pony of a bizarre relationship between himself and his human companions on their farm done à la Terry Gilliam animation style by Sarah Fairlie and the story of a reclusive named Sam’s obsession with mailing letters to himself in “Post” creates unexpected revolutions in other people’s lives for the better.

World War I tale “Angry But Unharmed” follows the seemingly nine lives of a travelling ship’s cat who becomes an unknowing observer and historian of the conflict is the solemnest entry here and final story “The Underwater Ballroom” – being its darkest – centres around a young ballroom belle’s ghost and her haunting of the property she was murdered in and the purpose of non-existence.

Unintentionally Depressing Children’s Tales’ endings may seem slightly unhappy, yet it’s kind of like listening to the blues: the contradictions of life are unfair but at least there’s a comfort to know that life does go on and will eventually work itself out, which is basically the play’s whole point it makes. 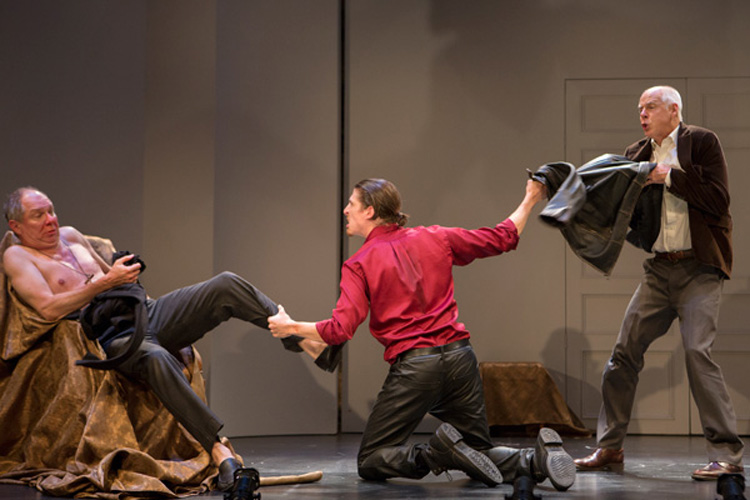 Molière’s Tartuffe has a sense of irony regarding religious hypocrisy and unjust persecution. When first premiered before King Louis XIV of France 350 years ago, the monarch and audience loved it except for one member: the Archbishop of Paris. Pressured by the Roman Catholic Church and a few aristocrats to ban the play outright for five years and despite an earnest rewrite on Molière’s part, the controversy crushed him immensely. Yet the play still survives and retains its scathing wit as performed by Soulpepper Theatre with equal vocation.

In the house of Orgon (Oliver Dennis) resides his house guest, the clergyman Tartuffe (Diego Matamoros) who is nothing more than a freeloading hypocrite feigning piety and willingly takes advantage of his host’s generosity that the family is wary of, despite the praise given to him by Orgon and his aging, opinionated mother Madame Pernelle (Brenda Robins) quite vigorously.

So much so that the patriarch decides to give his daughter Mariane’s (Katherine Gauthier) hand in (un)holy matrimony and heir to his fortune to him, drawing protests from his wife Elmire (Raquel Duffy), their outspoken maid Dorine (Oyin Oladejo), hot-headed son Damis (Colin Palangio) and Mariane’s beloved Valère (Gordon Hecht) that he dismisses them all, totally under the spell of the priest’s phony righteousness.

When finally exposed for the fraud that he is, the corrupt Tartuffe wastes no time in bringing down his vengeance on the man who had once welcomed him so warmly, using his position in the church to discredit Orgon that eventually leads to his own undoing.

Director László Morton allows a sense of contemporary flow for the audience to follow the cast’s kinetic and manic energy through Richard Wilbur’s cleverly done translation of the text on the movable set design of Lorenzo Savoini and period costuming by Victoria Wallace in under two-and-a-half hours the allegoric satire achieves.

The casting choices are all spot-on brilliant from Oladejo’s sharp-witted housemaid to Matamoros portraying the eponymous priest who’s soft-spoken demeanour hides his lecherous and unforgiving nature to abuse his position is a most convincing performance, not to mention the small roles filled by Mikaela Davies and Frank Cox-O’Connell as mute servants to Madame Pernelle and Tartuffe respectively, speak volumes.

In light of the current scandals that now plague the church over pedophile priests, this is not a lost connection to Tartuffe’s commentary to keep any religion in check for this stalwart, funny and stunning production.

“For more than a decade, this festival has attracted some of the world’s best street performers to Toronto, and more importantly, has raised much needed awareness and funding for a great cause, Epilepsy Toronto,” said Claude Norfolk, Scotiabank Senior Vice President of Toronto Region, the festival’s sponsor. “BuskerFest is the largest epilepsy awareness event in the world and through the pay-what-you-can admission, locals and tourists alike can delight in the dazzling performances in the downtown Yonge neighbourhood.”

And so it returns this weekend (August 21-24) with over 120 street performers from here and abroad for its fifteenth year from Queen to College Streets, and on record as being the largest busker festival in North America with about 1.5 million spectators that attended to see last year’s incarnation; to the new and returning acts to BuskerFest.

With six Guinness World Record holders, three World Champion performers and dozens of award-winning artisans under their tent, the street festival aims to be more than just a melange of street acts, starting with their sixth annual BuskerBall on August 19 at the Mattany Athletic Centre (formerly Maple Leaf Gardens; 50 Carlton Street) with acts from the fest and silent auctions raising money for Epilepsy Toronto; BuskerPlay Kids Zone located at Trinity Square Park (19 Trinity Square) behind the Eaton Centre with face painting, kids’ activities and workshops and a new, charitable epicentre at Yonge-Dundas Square (1 Dundas Street East), Scotiabank Stage with various acts’ fundraising will be matched by Scotiabank per dollar collected.