Left-right: SinhaDanse and Constantinople’s SUNYA; Sleeping Beauty on Ice from the Imperial Ice Stars and dance psychodrama Betroffenheit are coming to Toronto for this fall season’s worth of entertainment.

Some of the new and old come out to play from a world premiere musical set in 19th-century Paris and a German cabaret production to the returns of a fairytale told on ice to a classic morality play onstage for the fall and early winter season of the arts around Toronto.

After a brief respite during the PanAm/Parapan Games’ PANAMANIA, Soulpepper Theatre’s Young Centre for the Performing Arts (55 Tank House Lane) gets back with a full line up starting with the P.G. Wodehouse adaptation of Ferenc Molnár’s satirical chestnut on theatrical life The Play’s the Thing (September 2-October 14); Pamela Mala Sinha’s world premiere celebratory play on women Happy Place (September 4-October 17); the controversially provocative Marat/Sade (September 14-October 17); Yours Forever, Marie-Lou (September 14-October 17) on the emotional history of a Québécois family and the return of the company’s most popular musical in recent times, the rural Americana of Spoon River (November 5-22).

On the heels of its Australian tour and fresh out of their New York, Montréal and Ottawa runs, the cabaret company Spiegelworld lands in Toronto with their critically-acclaimed Empire (September 1-27) down at the Spiegeltent (318 Queen’s Quay West) loaded with circus, variety and burlesque acts including a speakeasy bar inside a intimate, 700-seat tent that’s won rave reviews worldwide.

The world’s greatest detective takes to the stage with stage legend David Arquette playing the titular role in the award-winning Sherlock Holmes (October 27-November 8) at Ed Mirvish Theatre (244 Victoria Street) in a original story inspired by Arthur Conan Doyle created by the late Canadian playwright Greg Kramer; with Michael Trevino as his associate Dr. John Watson out to solve a murder connected to a parliamentary vote to ban the opium trade in early 20th-century England and involving an enemy from Holmes’ past.

Staying within the timeframe is a world premiere production N The Queen of Paris (September 24-October 11) at the Elgin Theatre (189 Yonge Street) on the adaptation of the 1880 Emile Zola novel Nana set in 19th-century France of a rags-to-riches story created by Ella Louise Allaire and Martin Lord Ferguson who will fuse contemporary sounds with classical French music.

Tarragon Theatre (30 Bridgman Avenue) marks 45 years of local theatre with a full-bodied season with the internationally-acclaimed, one-woman looking for love show Blind Date (September 8-October 4) created and performed by Rebecca Northan; last year’s highly popular An Enemy of the People (October 7-November 1) getting remounted for this season; the midlife crisis dark comedy The Trouble with Mr. Adams (October 20-November 29) and François Archambault’s award-winning drama You Will Remember Me (March 1-April 10). They will also present three brand new plays, Wormwood (November 11-December 20) by Andrew Kushnir about a young Canadian caught up in the tumult of the Ukrainian 2004 Orange Revolution; Within the Glass(January 6-February 14), a comic-drama between two couples and a screw-up at a fertility clinic; the fantasy-com Mustard (February 2-March 13) between a mother and daughter going through a divorce along with a imaginary friend and the cautionary techno-mortality drama The Summoned (April 20-May 29).

Coming back from a successful inaugural season, The Coal Mine Theatre (798 Danforth Avenue) presents their second season with more hard-hitting fares with Jez Butterworth’s examination on the darker side of human nature The River (November 1-22); Shakespeare’s The Winter’s Tale (January 28-February 20); the unflinching Southern Gothic family tragedy Killer Joe (April 3-24) and the capitalist analytical drama Instructions (To Any Future Socialist Government Wishing to Abolish Christmas) (May 29-June 19).

While the city gears up to embrace its star-studded glitz of its 40th Toronto International Film Festival, the grounded 16th imagineNATIVE Film +Media Arts Festival spotlights aboriginal cinema October 14 to 18 with this year’s focus on the Nordic Sámpi Nation, that is experiencing a artistic renaissance on its survival from the artic environs and the modern world in recent years with a series of films; the first-ever Artist Spotlight on Cherokee filmmaker Heather Rae on her work including the Academy Award-nominated Frozen River; and gala screenings at Bloor Hot Docs Cinema (506 Bloor Street West) of the street thriller Mekko and experimental short Etlinisig’niet (Bleed Down) (October 14) and the two-spirited coming-of-age drama Fire Song (October 18) at TIFF Lightbox (350 King Street West).

Sony Centre for the Performing Arts (1 Front Street East) has a season featuring the celebrated American choreographer marking a half century of dance, Twyla Tharp 50th Anniversary Tour (October 30-November 1) with new works to the music of Bach, Henry Butler, Steven Berstein and John Zorn plus a remount of her 1965 debut work that launched her continuing career, Tank Drive, with her dance company’s first Toronto date in almost two decades; the very first Fall for Dance North (September 30-October 1) inspired by the New York version that’s been successful since 2004 with eleven local and international dance companies participating and guided by Artistic Director Ilter Ibrahimof and back by popular demand after wowing Toronto audiences in 2009, Sleeping Beauty on Ice by the award-winning Imperial Ice Stars (November 20-21). 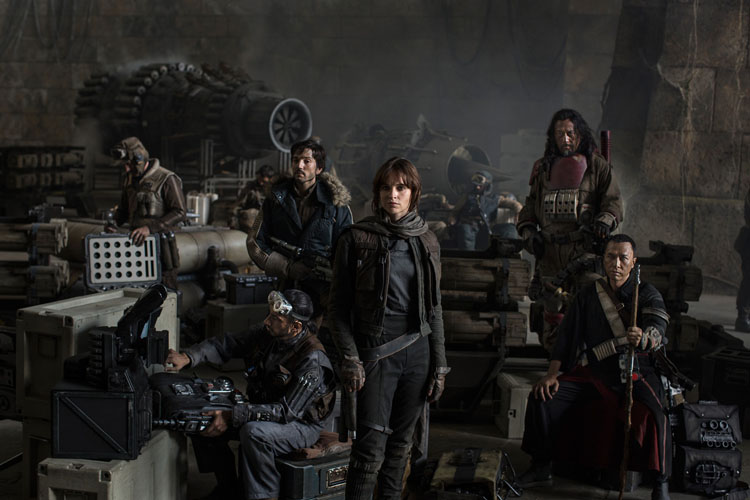 The Star Wars saga gets a new prequel entry, Rogue One, slated to follow The Force Awakens in 2016

We all know that many Bothan spies died to bring information on taking down the second Death Star in Return of the Jedi for the Rebel Alliance, but how did Princess Leia get the plans for finding out the weakness of the first Death Star? Next Christmas answers that question in the first film to come out of the Star Wars Anthology Universe, to sandwich in-between the new third Star Wars trilogy starting with The Force Awakens.

Promising to open new ground in George Lucas’ science-fiction playground while sticking to the old school is veteran Industrial Light and Magic visual effects supervisor and Rogue One co-executive producer John Knoll, who originated the story of a ragtag group of Rebel Alliance fighters who must infiltrate into the evil Galactic Empire and steal the plans of Emperor Palpatine’s dreaded space station that lead up to the future events of Episode IV: A New Hope. As Edwards has said about the film: “It’s about the fact that God’s not coming to save us and we’re on our own, (and) the absence of the Jedi is omnipresent in the film. It hangs over the whole movie.”

Kennedy describes the project as going “into new territory, exploring the galactic struggle from the ground-war perspective while maintaining that essential Star Wars feel that fans have come to know,” she said. “Gareth is such an innovative director and I’m so excited to be working with him and the extraordinary ensemble he’s selected for Rogue One.”

Star Wars: Rogue One is scheduled for release on December 16, 2016; Star Wars: The Force Awakens comes to cinemas December 18.