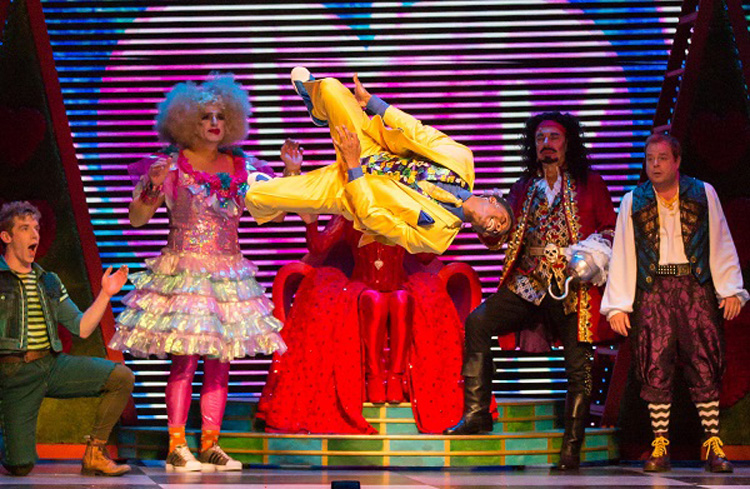 For his twentieth holiday pantomime, Peter Pan in Wonderland, Ross Petty gives it his all as retires his annual turn as the onstage baddie (but will continue to produce his fractured fairytale pantos) in a very strong script as penned by returning scribe Chris Earle, who did previous shows Robin Hood and Cinderella; for a fondest farewell.

Waiting in her apartment bedroom as the rest of her family takes off for the weekend, Wendy (Steffi DiDomenicantonio) longs for adventure with the return of Peter Pan (Anthony Macpherson) three years after their last encounter. Receiving a sea-themed gift basket, she get sucked down into Wonderland where the villainous Captain Hook (Petty) plans to capture her and take the pixie dust-filled locket Peter gave her in order to open up the Magic Tickle Trunk of Wonder – a neat wink to the late Ernie “Mr. Dressup” Coombs, a former guest star in Petty’s pantos – and destroy the power of imagination that gives Peter the ability to fly and take over Storyland.

Right behind her is the boy that never grew up and his bumbling pixie-in-training sidekick Tinkerbum (Dan Chameroy) that’s afraid to fly, to stop Hook’s nefarious plot in marrying the Elmer Fudd-lisping Queen of Hearts (Jessica Holmes) who owns the Magic Tickle Trunk by gathering some new allies along the way, who just happen to be Alice herself (Jordan Clark), The Mad Hatter (Lamar Johnson) and the Cheshire Cat (Taveeta Szymanowicz) to help out, not to mention a hip-hop Croc that also wants more than a piece of that evil pirate.

Loaded with puns and pot-shots galore for both adults and kids alike, Petty is never a one for small exits in the role he was born to ham up as Hook in getting all the best lines and playful snarls the audience eats up; as longtime regulars Eddie Glen as right-hand man Smee is a glee to watch, Chameroy continues to almost spotlight steal Petty’s glory in draggy delight as Tinkerbum and Holmes is a riot as the lovelorn, if quasi-dictatorial Queen.

Macpherson upholds his heroic part for the most part, but DiDomenicantonio is given very little to do in comparison to Clark and the rest of the cast with Johnson’s slick dance moves to Marc Kimelman’s sharp and springy choreography to originals and classic/current pop and rock covers. Michael Gianfrancesco’s eye-popping set and costume designs never fail to impress in working alongside Beth Kates and Ben Chaisson’s digital projections and the lighting designs of Kimberly Purtell.

Director Tracey Flye gives Petty a grand send-off with an even pace and, oddly enough, a panto with watered-downed double entendres for a change. Nothing wrong with that at all as Peter Pan in Wonderland is played out as a fun, mash-up campy tribute to the actor/producer who made this holiday tradition for what it is and always are a pleasure. Thanks for the memories, Petty – your guffaws, growls and (at times) garters will be missed.

Peter Pan in Wonderland continues through January 3. For tickets/information, call 1-855-599-9090 or rosspetty.com. 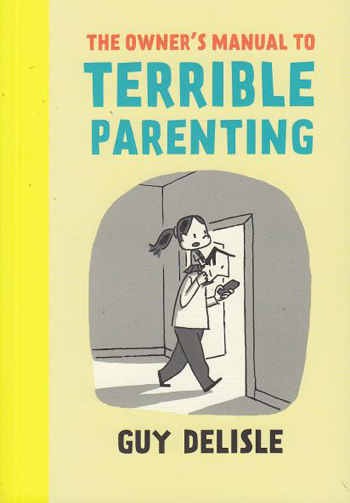 The Owner’s Manual to Terrible Parenting

by Guy Delisle; translated from the French by Helge Dascher and Rob Aspinall

Canadian cartooning superstar Guy Delisle entitles his third and final instalment in his acclaimed “Bad Dad” series of blunders and mischief of modern parenting with The Owner’s Manual to Terrible Parenting where his fictional (or not) self and his son Louis and daughter Alice go about their home in Montpelier, France where this time the kids often say the darnedest things.

Like how sometimes you’re not as smart as a sixth-grader when they humble you with their advanced knowledge Louis demonstrates in “Science” in explaining the Earth’s gravitational pull on the moon in a more logical way than his father’s crazy theory and even to suggest that as a subject in his “Bad Dad” books much to his chagrin; or in “Titch” where Alice asks Guy to explain a certain profanity she overhears at school, which he more than eagerly obliges her. 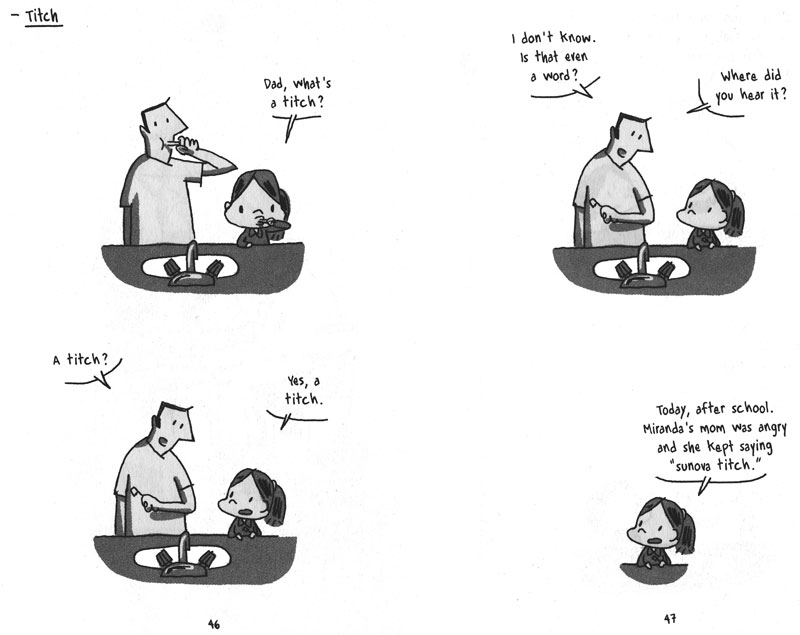 Delisle takes the everyday chore of being a stay-at-home father with a liberal sense of the world that would often shock the ordinary parent of how not to be a bad example in the hectic, insane if sometimes rewarding aspects of raising children in these fun little series of satirical cartoons, that can range from the bluntly philosophical (“Life”) to strategically usage of reverse psychology (“The Console”).

More often it can go completely silly when Guy gets all macho in trying to consume hot mustard to impress Louis, playing mind games with Alice with a false bout of amnesia (“After School”) and often times get carried away when showing off the dangers of throwing in a cigarette lighter into a backyard bonfire (“In the Garden”) or pulling pranks on nasty retail workers (“At the Store”).

Done with the simplest lines and greyscale tones plus a warped sense of humour, Delisle knows how to bring out the giggles in his closing entry for the “Bad Dad” trilogy on young childrearing. Perhaps he should wait a few more years when his kids turn into teenagers. Now that will bring in more material for him to work with, provided both he and they survive this phase of childhood first.