From its opening salvo on the winter seasonal tune “Better Off at Home,” you know you’ve arrived at The Second City comedy troupe’s holiday revue Unwrapped from the cynical bashings about everything involving the year-end festivities dealing with unbearable guests, SAD, post-holiday billing hangovers and of course, the weather. But taking the air out of those moods is a tonic to what is often considered the happiest time of the year usually proves the opposite thereof, which they skewer quite well.

Written and performed by the current line-up of Roger Bainbridge, Brandon Hackett, Devon Hyland, Lindsay Mullan, Ann Pornel and Alessandra Vite, it’s more than just Christmas-themed skits getting roasted on an open fire but of the everyday observations of life in the two-hour production, be it an awkward racial treatise on choosing over a Netflix option, a first-date farewell on the TTC that disintegrates when honesty doesn’t become the best policy, a near-mom/daughter moment turning into a quirky dance number or a running gag involving a deer.

Yet it does go there about the season in question when Hackett breaks into a jazz ditty into rolling all the holidays into one entitled “Merry Christmas (A Secular One),” a dysfunctional Canadian senator’s family sitting through a dreaded family portrait shoot, three desperate travellers trying to do a competitive one-upmanship over a flight to Phoenix, office parties to a little spoof on the he-said/she-said classic jingle “Baby, It’s Cold Outside.”

Frank McAnulty helms the show with a firm but gentle direction and gets the most out of the troupe’s sketch material and comedic timing, even when the humour gets a bit detrimental (the standout tipsy Virgin Mary skit by Mullan is definitely not for religiously inclined) the players/writers have put lot into making it quite hilarious for the most part, in particular to Pornal singing the joys of watching Netflix much preferable to having a hot boyfriend.

And don’t leave too soon when there’s an extended post-show improv exercise with a couple of special guest Second City alumni participating with the cast from taking suggested topics from the audience of the performance, that can take a life of its own going from a basic subtleness to a roaring hilarity.

If you’re looking for a safety valve about the insanity of the holiday season that could even get the best out of jolly Saint Nick himself, Unwrapped’s warped humour will fit the list to get a good laugh about it because sometimes, it’s just needed to get through it.

Born from a what-the-hell, blaze of glory Christmas album project from his band Twisted Sister for A Twisted Christmas that turned into a critical and commercial success back in 2006, heavy metal master Dee Snider twists it further with another take at the holiday season with his Rock & Roll Christmas Tale musical that borders on being a reasonably good, self-depreciating parody of the genre he’s built his career on for forty years with a sense of giddiness to it.

As the gravely-voiced Snider narrates throughout the 95-minute production, he weaves a bit of the familiar Christmas story stock with fusing to a struggling heavy metal quartet Daïsy Cüter (pronounced “cutter”), who has toiled for over a good couple of decades with a genre long gone from popularity and the rock-star dream fading with every empty dive they perform at, including The Down ‘n’ Dirty joint run by Roxanne (Taylor Dayne).

Threatened with a week-before-Christmas deadline to get the place packed or lose their only venue, the desperate head-bangers led by their grandeur delusional frontman singer D.D. Snutz (Peter Deiwick) proposes to his comrades lead guitarist Johnny B. (Sean Kelly), angry bassist Tank (Kevin Fox) and sweetly naïve drummer Ralph (Spencer Robson) that they sell their souls to Satan in return for the glory they’ve so lusted for.

Signing and burning their “contract” written in blood to the devil, things start turning out for the better for them only in the midst of their hard rocking tunes they start bursting into old Christmas songs heavy-metal style, much to D.D.’s frustration and the consternation of popular rival act MC Dedrok (Tim Funnell) who headlines Roxanne’s alternative rave venue Club Dazzle upstairs and constantly mocks at their passé attempts.

On Christmas Eve the band gets a one-time chance to impress some record labels come to check them out after their online videos go viral and D.D. sees it as a opportunity to show how hardcore they really are, as anointed with the chalice ordained by Ozzy Osbourne years ago – actually, a Styrofoam cup he tossed away to him – does he actually gets a lot more than what he bargained for when He Who Shall Not Be Named (Josh Murray) also shows up at the concert for a lesson he won’t forget.

Sold out to its world premiere shows in Chicago last year, the Toronto casting here does stand up well to Snider’s songs that include his iconic anthems “We’re Not Gonna Take It” and “I Wanna Rock,” his surprisingly nice (and normal!) yuletide tune “The Magic Of Christmas” – even Céline Dion covered it recently and made him some coin – plus a couple of decent numbers “It’s Not the Club That Sucks” and “Raise Some Hell” that make the cut, even if the book does go out on that warm, fuzzy feeling in its rousing third-act that is to be expected from something of Christmas Tale’s nature, as directed by Adam John Hunter.

Deiwick satires all the big hair metal leads past and present that could be seen as mockery of Snider’s onstage persona with gusto and the man doesn’t mind in doing that to himself or his fellow colleagues either, which he name-drops quite a few; in keeping all this together, including a turn as a third-rate exorcist hired to purge the Christmas spirit from the band. Top 40 legend Dayne is still in good voice and neatly plays the hard-edged club proprietor with a soft center when a possible romance slowly builds with Robson’s Ralph, who’s more of the play and the band’s younger comic relief and Funnell as the Deadmau5-like DJ antagonist does alright, but feels kind of like a standard role here.

Predictable as the plot it is, Dee Snider’s Rock & Roll Christmas Tale could become a new holiday tradition and it is, on a technical level, impressive through Beth Kate’s lighting designs with Rob Bissinger’s scenic designs and the old-school costuming by Suzette Guilot-Snider (Dee’s wife) waxes nostalgic – got to love those day-glo spandex pants! – that is also a family-friendly fun time for what it actually is. 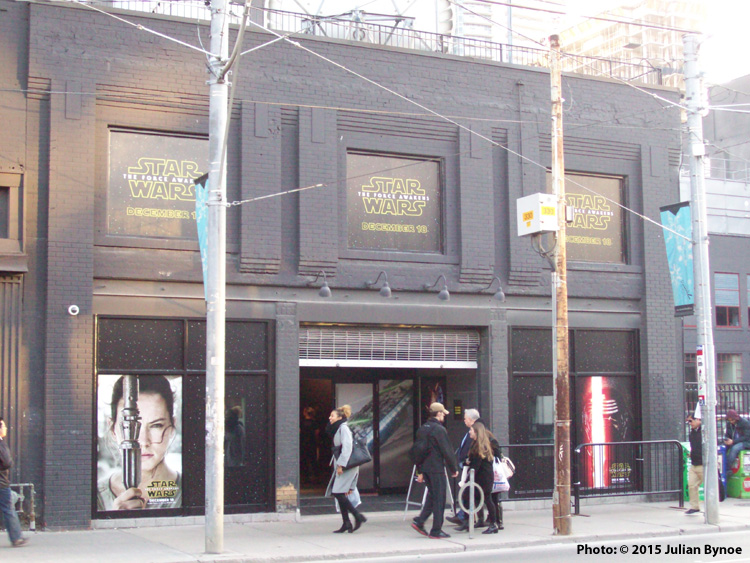 It may look a tad pretentious on the outside, the pop-up Star Wars: The Force Awakens Exhibit gallery on Toronto’s Queen Street humbly shows off life-size wares from the highly-anticipated film opening this week.

Try as one might to avoid it, it is everywhere. The unstoppable promotional machine to hype the biggest film of the year, if not the decade, Star Wars: The Force Awakens from those plastic cups at Subway to a couple of cosmetic lines out there. And even in a little vacant storefront near the CITY-TV building on Queen and John Streets has been, for a very limited time; the science-fiction/fantasy behemoth is occupying just a few items for an exhibit of costumes and items from the film is small viewing, but you can’t deny it will perk one’s interest in the Lucasian universe once again. 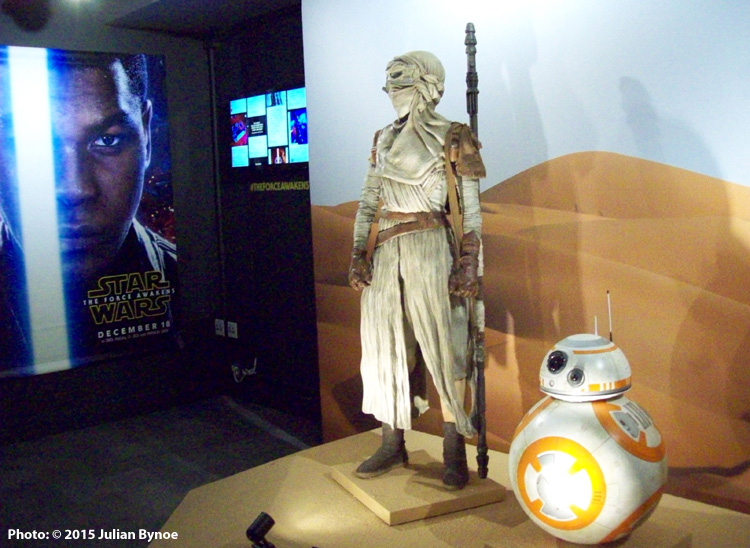 Costumes and models from Star Wars: The Force Awakens' show Rey and her android sidekick BB-8 at the pop-up gallery.

The only real surprise is how the now-iconic breakout figure, the roly-poly astrotech droid known as BB-8 is kind of diminutive – roughly about the size of a average five-year old child – compared to its larger-than-life superstar predecessor R2-D2, yet is unassumingly cute as it stands next the to the mannequin donning on the sun-blanched costuming of the character Rey against the desert backdrop, looks so rough-hewn in its fabric material up close to feel pretty real on its surface. 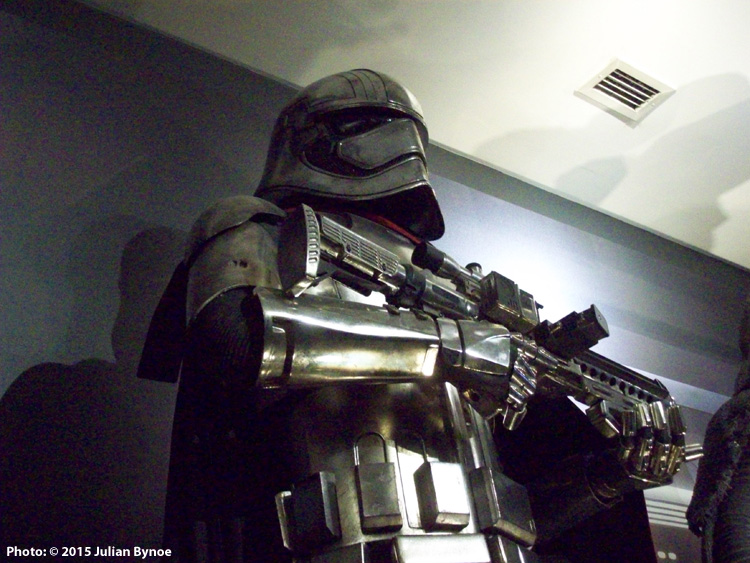 The imposing row of the outfits used by the film’s villains, the First Order, right next to the heroes with Captain Phasma’s armoury looking like cross between the original trilogy’s Stormtrooper armour and Boba Fett only with more metallics and looks to be its most intimidating. Mystery principal baddie Kylo Ren’s worn-out black robe and semi-Darth Vader mask comes at a close second to being the best, complete with the infamous cross-like lightsaber prop that’s been the source of much speculation since the teaser trailer that came out last year and the First Order Stormtrooper costume is more streamlined than in previous trilogies, but feels a bit too pristine to look like it could strike fear – that is until you see the accompanying prop laser rifle. 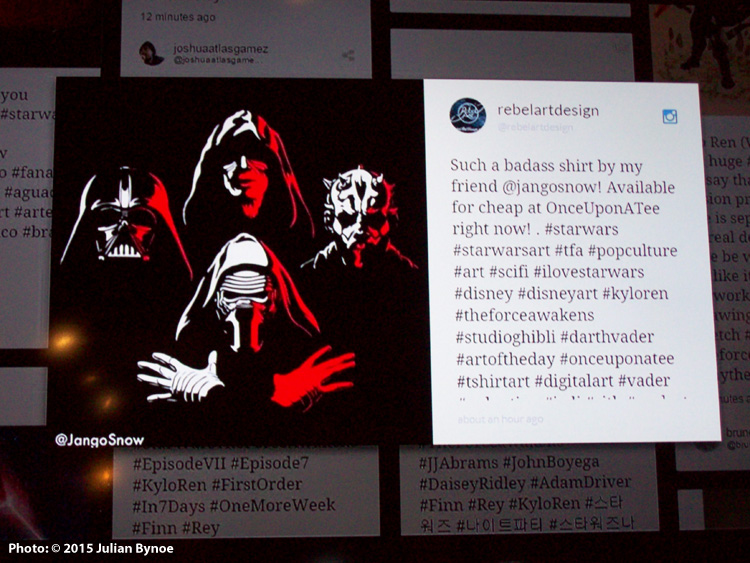 A really cool fan-art grab from the video feed of #theforceawakensto Twitter site.

Other than that, there’s a couple of screens showing on a loop of Force Awakens-based videos from a couple of “making-of” and preview trailers showpieces, moments from the cast appearance at the San Diego Comic Con this summer and such with one containing social media streaming commentaries from the #theforceawakensto Twitter feed that might peak some interest, if only a little; a photo shoot corner where one can take a photo or a selfie with a model of BB-8; plus a cashier stand selling two limited-edition t-shirts of The Force Awakens for $25 each (credit card or debit only). 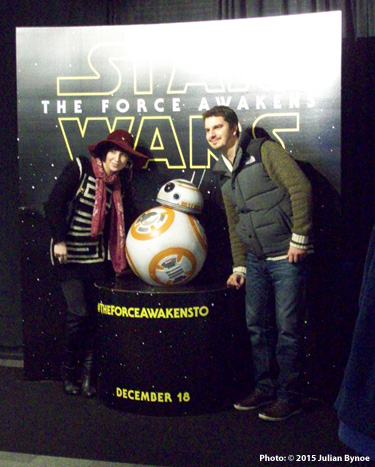 Fans take a moment to pose with BB-8 model at the limited Toronto run of Star Wars: The Force Awakens exhibit.

As said, it’s a tiny pop-up exhibit with very little goodies to offer, yet it manages to contain all the film’s forthcoming secrets that will soon explode across the film screens of the world soon enough. Only the dedicated and rabid Star Wars fans will find some serious interest to make it worth the trip, only they should hurry since its entering its final few days in Toronto before most of us returns to that galaxy far, far away…