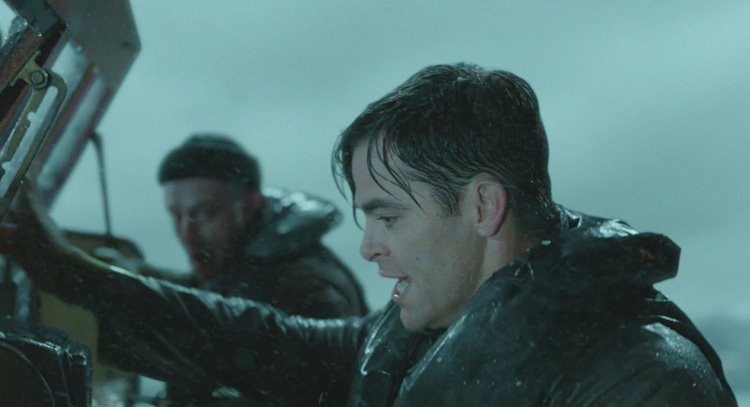 Screenplay: Scott Silver, Paul Tamasy and Eric Johnson; based on the Casey Sherman and Michael J. Tougias book The Finest Hours: The True Story of the U.S. Coast Guard’s Most Sea Rescue

The seafaring period adventure-drama The Finest Hours could have been a gripping rescue story, provided that it focused more on the actual mission itself and not go wandering around with too many personal dramas and rather pointless pauses being used all over the place in regards to the risks of open water and the people who place themselves in danger in doing their duty, in which the film sinks itself into.

Based on the non-fiction book by Casey Sherman and Michael J. Tougias on the real-life disaster of the oil tanker S.S. Pendleton sinking off the Massachusetts coastline during the nor’easter storm of February 18, 1952, U.S. Coast Guard commander Daniel Cluff (Eric Bana) sends out coxswain Bernard “Bernie” Webber (Pine) along with a small team involving Richard Livesey (Foster), Ervin Maske (John Magaro)., Andrew Fitzgerald (Kyle Gallner) and navy seaman Wallace Quirey (John Ortiz) to investigate and possibly aid and assist in helping out the ship that’s already split in half and barely staying afloat, thanks to its quiet, if competent chief engineer Ray Sybert (Affleck).

As if Bernie has enough problems on his hands, considering he has to rescue thirty-two survivors through a stormy gale and rogue waves in pitch blackness in a small motor lifeboat that can basically carry twelve people – including his crew – and on top of all that, he’s engaged to be married to his lovely Bell operator fiancée Miriam (Grainger), who worries greatly in face of the prospect that her future husband might not make it out there alive and ponders the future concerning the hazards of his occupation.

Despite the brilliant stormy sea effects reminiscent of The Perfect Storm (if a terrible waste of a 3-D conversion format), the film doesn’t know whether to be a high seas thriller or a romantic-drama, which it starts off as; by aimlessly running around with a complicated script from screenwriters Scott Silver, Paul Tamasy and Eric Johnson who probably were trying to put a bit more gravity of the situation imperilling the couple swirled into a survival tale that feels limp and neutral.

In fairness, Pine takes a breather from his usual smarmy, confident matinee idol persona he usually inhabits in his roles to play the really shy and unheroic Webber, especially when he’s courting Grainger to facing the rough elements in a literal suicide mission with true feeling. Grainger portrays Miriam as a forward and unyielding woman of her time and isn’t overbearing for it; the rest of the cast are okay and don on Bostonian accents pretty well to be passable with the exception of native son Affleck who can turn it off and on when needed and Bana’s tiny role as the outsider from Virginia doesn’t perpetrate a hackneyed accent and attitude that would be considered falling into caricature.

Gobbling up two hours is quite a stretch for this film that doesn’t see any serious action until the second hour and spends most of the time looking at wintry landscapes and maritime greys director Craig Gillespie (Lars and the Real Girl) shoots a lot of and could have trimmed a few minutes off in certain places deemed unnecessary to the story. The filmmakers try their noble best to give honour to the heroes of The Finest Hours and the hardships they encountered out in that frigid day, but it’s not exactly what one would find anything inspirational out of tepidly-paced drama.

Oscars pool season is here and coming amongst the nominees that made the grade and the shortlisters that came close enough to be considered to be in the annual Oscar Shorts Nominees – Animation that puts another first this year by placing one of the nominees at the end of the shortlists due to its graphic nature (more on that later) that should be heeded if you’re planning on taking young children to watch this otherwise noteworthy anthology reel.

Screened ahead of their feature The Good Dinosaur late last year, Pixar short Sanjay’s Super Team, loosely based on director Sanjay Patel’s own childhood; where his Saturday morning TV cartoon- and comic book-loving younger self turns a seemingly boring Hindu ritual by his observant father into a superheroic battle between good and evil done mostly in pantomime, is the most inventive short the studio has done in ages in showing the power of the imagination, a touching father/son bonding and a bridging between Eastern-Western cultures.

Two-time Academy Award-nominated indie filmmaker Don Hertzfeldt brings World of Tomorrow, a darkly comical tour de force done in digital minimalism of a five-year old girl Emily (Winona Mae) being visited by her older cloned self (Julia Pott) about 227 years from the future and drones on about her life in a emotionless monotone about love, loss and memory as her younger self looks on with a sense of naïve innocence. If it sounds like a downer, it isn’t all that much since it points out of a cipher-like character’s search for humanity in its seemingly jaded future-tense existence. Being the longest entry in less than 17 minutes, it’s a time-trippy one that will make you laugh and ponder all at once.

Bear Story from Chile has its main protagonist, an old, lonesome bear street busker who cranks out his life story through a mechanical diorama about being forcibly taken away from his loving family by a diabolical travelling circus and his attempts at escape, is beautiful and bittersweet in its digital animation, but it also clings to hope as writer/director Gabriel Osorio tells it through pantomime that says it most, plus the music box score by Dënver adds additional emotion to it for its 11-minute run time.

The 16-minute Russian science-fiction bromance We Can’t Live Without Cosmos by Konstantin Bronzit speaks of two childhood buddies who dream of reaching the stars and strive to become cosmonauts. Through the rigorous training and selection they endure until the day of the big mission comes, it turns into a story about friendship and the lengths it will extend itself is as funny as it is heartbreaking to watch when life takes a different turn of events.

Canadian-born master animator Richard Williams, best remembered for his Academy Award-winning work on Who Framed Roger Rabbit? and the 1971 animated version of A Christmas Carol, is back with his paper-cel animation project, Prologue. Rendered only with graphite and a touch of colour pencil crayon, a method that gets very little respect among computer-generated works nowadays; it depicts a highly graphic battle scene between four naked warriors to the death during the Spartan-Athenian wars 2,400 years ago, as witnessed by a young girl. Not for the squeamish, this dialog-free and intense short conveys an anti-war message and a very powerful one at that.

Not to be overlooked are the runners-up for the Acamedy Awards Best Animated Short are If I Was God… (left) from Canada’s Cordell Barker to the quirky Bill Plympton tale The Loneliest Stoplight (right) in the 2016 Oscar Shorts Nomimees – Animation.

For the runners-up there is the NFB short If I Was God… from Cordell Barker, a multimedia mash-up of the director’s junior-high school fantasy gone wild involving a frog dissection session during biology class between an antagonistic classmate and his pure-hearted crush spoofing off a little from Frankenstein is amusingly fun; two French shorts A Short Story of A Fox and A Mouse and Catch It, where the former shows the unlikely camaraderie that develops between the titular characters versus two owls on a winter’s day is simple and cute, whereas the latter about a family of meekrats and a vulture fight over a single prized fruit is a pale Warner Brothers-esque knock-off.

Last in the pack is another tome from Bill Plympton, The Loneliest Stoplight, where comedian Patton Oswalt narrates as a intersection stoplight’s point-of-view who endures the elements and loneliness until a traffic jam from a nearby super-highway changes everything, if only temporarily. It’s a charming little story done over a bluesy soundtrack about purpose with an (almost) happy ending that’s unusual from the twisted noir humour of Plympton which is so familiar, but it’s not to say it isn’t there.

If I was a betting person, I’d personally pick Prologue for its direct technique, storytelling and message to win it. But chances are that the voters will go for either the feel-goody Sanjay’s Super Team or the semi-melancholia of Bear Story, so in any case it’s always kind of fun to play guessing games and it’s better to debate that than over its current (if somewhat valid) #oscarssowhite controversy. 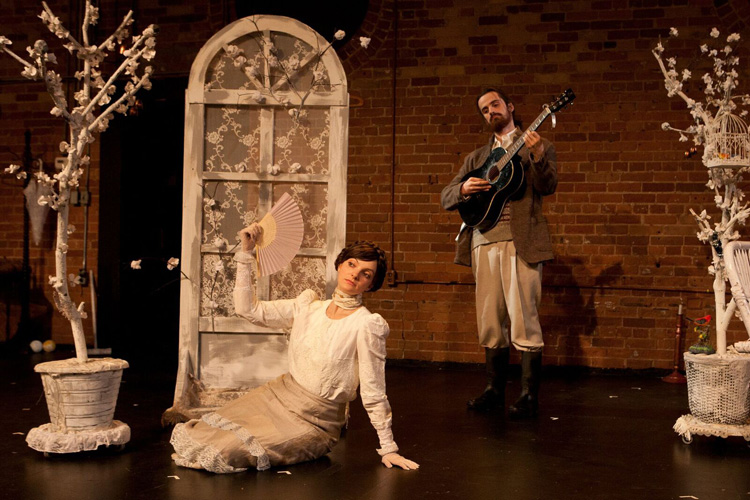 Anton Chekhov’s final masterwork The Cherry Orchard not only was it meant to be a comedy about class structure, it also provided as a impetus of a foreboding future for his fellow Russians as written in 1904. Local troupe The Chekhov Collective brings the play to full-bodied life of a bygone era with all of its metaphors and heritage to give that authentic feel of what it must have been seen and felt like when it performed over a century ago.

Partially bankrupt and unable to pay down her childhood abode’s mortgage, Lyubov is propositioned by the young, rich merchant Yermolai Lopakhin (Andrew Pogson), whose father and grandfather were once serfs under the Ranevskaya family until their emancipation by the Tsarists in 1861; to turn their lands into real estate with some serious potential. As they live in denial, it masks their hidden fears of losing their property that includes their beloved cherry orchard and status, prompts some desperation in trying to get the money in on time or face foreclosure.

Shaking them from their blissful ignorance from time to time comes from perpetual student Petya Trofimov (Harrison Thomas) who sees the hard reality of the citizenry they choose to be blind towards to Boris Simeonov-Pishchik (Neil Foster), the drunk and skinflint neighbourly landowner always looking for someone to lend him a few roubles to pay off personal debts, among other characters; that their changing world comes crashing down with numbing alarm.

Dmitry Zhukovsky’s nimble direction grounds this production of its proud Russian roots through smattered dialogue and musical numbers – plus some puppetry, dance and magic tricks – as its key ingredients in keeping it real for its two-and-a-half hour running time of Chekhov’s reflections on the bourgeoisie of the time and the blurred divisions between the upper and lower classes that were about to clash, are not lost in the translations brought about through Polley’s sharp adaptation.

The cast puts on reverent performances from the witticisms of Willis’ level-headed Boris, Polley as the sentimental matriarch, Kane’s sweet, playful and bounding innocence of Anya has an infectious optimism as opposed to Jones’ broodingly emotional pessimistic Varya; Thomas’ proto-Bolshevik in the making is passionate and the unbridled ambition and drive seeping out from Pogson’s venture capitalist role is seen as poetic justice.

Supporting roles by Tanner, Ruzhyev and Gilbert are standouts alone giving some comic relief as well as the manic-depressive clerk Semyon played by Clayton Gray, the director’s walk-on as a ragged passerby shouldn’t be overlooked. Combined this with the stripped-down naturalistic set design by Dimitrii Khilchenko, Kateryna Maryevych’s simple costuming and Joseph Patrick’s subtle lighting, The Cherry Orchard’s timeless tale about change hasn’t lost its sensible taste or bite.

The Cherry Orchard runs through February 14. For tickets and information, call 416-368-3110 or thechekhovcollective.com.