Screenplay: Kelly Marcel, based on the E.L. James novel

What seemed like one of the more un-filmable books of popular literature, director Sam Taylor-Johnson (Nowhere Boy) takes a leisurely build in the pacing to reach the moments of passion and manages to incorporate the regular and bondage sex scenes without getting too graphical about it, but it isn’t clichéd either with an ending leaving open for other possibilities in continuing the series (expect the sequel Fifty Shades Darker to hit screens in 2016).

Johnson plays the innocent, virginal Anastasia convincingly as a lover who’s conscience gets gnawed at by wanting to be closer to Christian for her first major role and Irish hunk Dornan makes a fine Mr. Grey (this guy orders a gin and tonic with a James Bond chic) who also is conflicted with his own personal demons; as both leads establish career-defining roles and rather playful chemistry (check out the e-mail banter throughout that makes one wonder who’s the dominate and submissive). There’s also some good support work from Christian’s loving adopted family – Marcia Gay Harden and Andrew Airlie as his parents and siblings Luke Grimes and Rita Ora – that offers some semblance of a normal existence in contrast to their distant son’s downtime activities.

Danny Elfman’s score dances well around the scenery (even if he did borrow some from the self-penned IRIS soundtrack) here, along with the cinematography of Seamus McGarney and spatial set décor by Sandy Reynolds-Wasco and Sandy Walker that feels more expansive and colourless in the emptiness of Christian’s life the film explores. 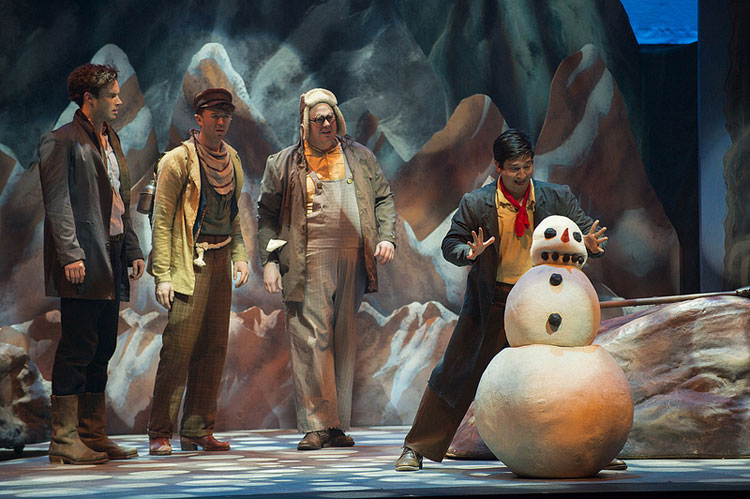 For those who loved The Book of Mormon (as I certainly did) will get the same vibe from its co-creator Trey Parker in Cannibal! The Musical in retaining both a low-keyed production and a slight professional upgrade in adapting his 1993 cult film for what promises to be another hit from the crew that gave the world Evil Dead the Musical.

(Very) loosely based on the real-life Alferd Packer Massacre of 1873 Utah, the accused murderer (Liam Tobin) awaits his fate with the array of charges against him, including cannibalism – the only felon ever tried and convicted of in American history – trial reporter Polly Pry (Elicia MacKenzie) interviews Packer in jail to get a sense of the events that led up to this, although she too is convinced of his guilt.

Reluctantly hired as a mountain guide to lead several gold prospectors (Marty Adams, Mark Andrada, Trevor Martin, Mike “Nug” Nahrgang, Tim Porter) through Colorado Territory to Breckenridge, Packer and his semi-faithful horse Lianne more or less tries his best in handling them through a harsh winter and trying to stave off the cold and mostly hunger while running into a variety of characters from an overly teary-eyed Cyclops (also Porter) and the strange Native American tribe run by their Chief (also Andrada) and daughter Yuki (Lana Carillo), who oddly seem to know Japanese and the martial arts.

Shamelessly campy in all respects, director Christopher Bond knows how to maintain the original film’s absurdity and enhance it more with additional songs co-written with Aaron Eyre and cast member Martin in its fast-paced crude wit with seasoned stage actors alongside Second City alumni to add more punch to the numbers and comical timing in spoofing Westerns, stage musicals and pop culture troves not out of place and ribbing sensationalistic journalism, too.

Tobin is in good voice and character as the accidental antihero Packer tolerating a motley crew that weave from questioning his competency to glorifying praise, as the rest of the cast take on multiple roles with ease. They all get their merits, but there are some standout performances from MacKenzie going from hardball journo to cause célèbre crusader; Adams as the godly Humphrey, Nahrgang as resident grump Miller and a snooty leader of a band of French trappers; Andrada handling the eternally optimistic Swan and Indian Chief hilariously and Porter doing the swishy trapper Loutzeheiser and lust-lorn Noon.

The props from Scott Patterson and Marina Snider keeps Cannibal!’s homey touch like Evil Dead (don’t expect any of it to be some polished Broadway musical), Stacey Maroske’s choreography is rhythmically synchronized and set design by Jackie Chau is evenly economical. And as for the music, there’s your staple of South Park-esque political incorrectness (“Gentlemen of the West,” “When I Was on Top of You”), a mockery at Bollywood numbers (“That’s Very Interesting”) and highlights “The Trapper Song” and “You’ll Be Dead,” although its low point goes to “Meat My Destiny” trying to send-up the standardized ballad that doesn’t go over well.

Cannibal! The Musical is somewhat decent fare for those who like their lowbrow comedy low and a certain level of professionalism kept at a minimum and not skimping much in the presentation for a fun time, which this show does guarantee you.