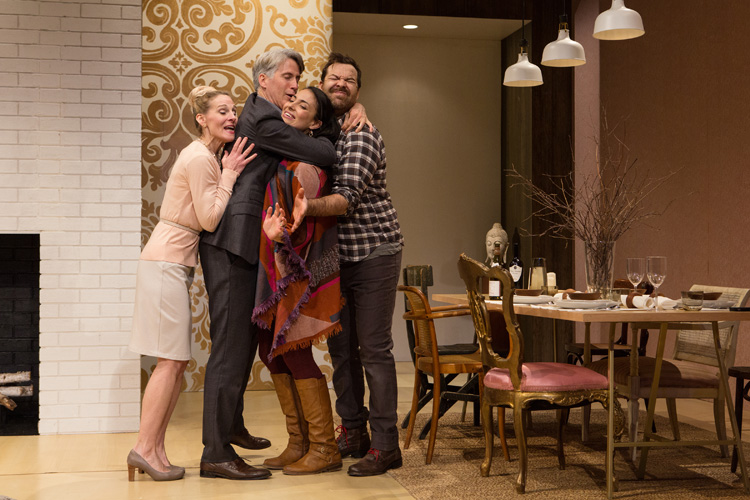 Within the Glass (Tarragon Theatre)

Defining parenthood can come in various opinions and beliefs and thanks to modern technology the chance for infertile people to actually conceive a child, has become a blessing and a curse on how hardwired we are to our natural instincts developed over millennia of human existence that its become boiled down to actual ownership on another human being. Playwright Anna Chatterton brings these subjects up in her comedy-drama Within the Glass of old and new dilemmas behind procreation.

A middle-aged couple, Michael (Rick Roberts) and Darah (Philippa Domville), invite the youngish artisan couple Scott (Paul Braunstein) and Linda (Nicola Correia-Damude) into their upscale home for dinner, when they find out that the fertility clinic they went to implanted their fertilized egg into Linda’s uterus by mistake and want to come to some kind of agreeable arrangement on how to handle this mess.

When Linda suggests adopting their child in order not to break the mother-child bondage that now has formed between her and the foetus, chaos ensures between legalities versus what is best for the child’s interests of all parties involved that range from the subtle to the ridiculous as the evening drags on from coming to an agreement to unravelling to what has become a more than complex situation.

Chatterton poses and balances those questions and topics ranging from reproductive rights, morals, technology, relationships, life choices, gender and class politics rolled into a frenzied and often funny kaleidoscope with a double-edged discomfort to ponder over under director Andrea Donaldson who manages to keep these momentums rolling from the stellar cast over the play’s ninety-minute run.

Braunstein’s detached Scott acts such as an everyman with a wounded pride, yet tries to bring logic to Linda’s choice on the manner as the only one in the room making any type of sense; Correia-Damude’s performance conjures up boldness against Darah’s right of entitlement with smug glee and empowerment but her front periodically caves to vulnerability. There is some sympathy earned from Domville’s role as a infertile woman who put her career first over motherhood, not as a victim of choice but of circumstance and timing; as Roberts’ investment banker runs from self-assured to the frantic on keeping both women happy puts more dimension and hilarity to the play’s structure.

Julie Fox’s set design is lavish and elaborate with her costume designs fitting all the characters’ personas atop on the easy-to-the-eye lighting design of Rebecca Picherack without going over the top for it. Within the Glass is a courageous hot-button topic that has followed us since the infamous “Baby M” case back in the mid-1980s that changed the surrogacy parent industry forever and to what degrees will any couple go through to fulfill that basic human need for children, plus a really amusing foot massage scene to watch.

Within the Glass continues through February 14. For tickets and information, call 416-531-1827 or online: tarragontheatre.com. 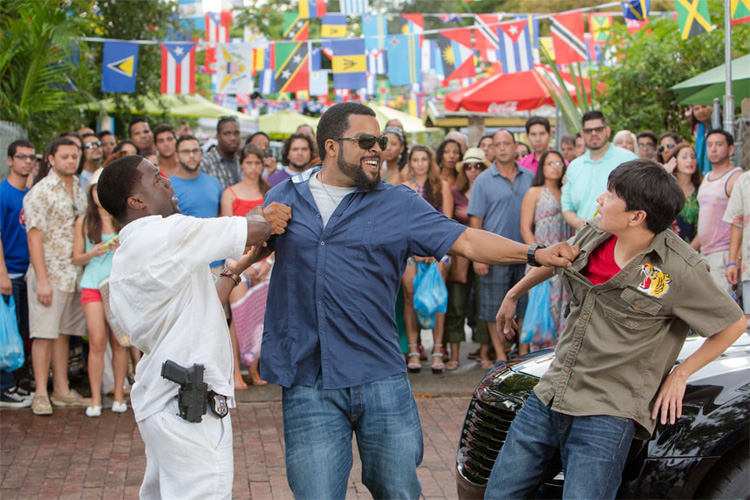 Screenplay: Phil Hay and Matt Manfredi; based on the characters by Greg Coolidge

The wildly successful 2014 surprise hit action-comedy Ride Along gets its expected sequel with the antagonistic/protagonistic buddy-cop duo of Ice Cube and Kevin Hart back for Ride Along 2, which is pretty much from what the last film was about only a bit better and a lot more action going for it which the fans will most appreciate, if nothing else more to it than that.

After nearly bungling up a drug bust that takes his partner out on medical leave caused by his overenthusiastic future brother-in-law and now novice cop Ben Barber (Hart), hard-boiled Atlanta Vice police detective James Payton (Ice Cube) manages to stumble upon a encrypted flash drive from a suspect containing vital information on where the local meth dealer is getting his source from that leads to Miami and needs two days there to find the hacker behind the info and take down the supplier.

James reluctantly brings Ben on the trip for the sake of his sister Angela (Tika Sumpter) so she can organize their big day without him getting in their wedding planner Cori’s (Sherri Shepherd) face and mainly just to prove that Ben isn’t really cut out to be a detective on the force. Upon arrival they also hook up with tough Miami homicide detective Maya Cruz (Olivia Nunn) who’s investigating the recent murder of a corrupt ports commissioner, who has been suspiciously replaced quickly by a new and equally corrupt one.

Catching up to the hacker A.J. (Ken Jeong), who made the encrypted codes for the powerfully rich shipping magnate and crime lord Antonio Pope (Bratt) to hide his all contraband operations and the officials he’s bribed around town, is now on the run after embezzling a few million from him. The three law enforcement officers try to keep him alive long enough to stop the crooked businessman before a major shipment of drugs and weapons comes in, plus getting Ben to the altar on time – and alive – in two days time, if possible.

Feeling more like a remake of Lethal Weapon 2 transplanted to the sunny exotica of Florida, the film on the whole is an slight improvement over the last one even though nothing much has changed with the relationship between James and Ben, as Hart remains the eager but smart funny man cramping up against Cube’s badass demeanour who’d rather be the lone wolf, yet begrudgingly needs him when it really counts (in particular to a spectacular videogame-inspired car chase scene); which is what makes this series’ formula work with a fishes-out-of-water plot well enough as articulated by returning director Tim Story and his breakneck camera work.

Bratt lays enough slick charm and cold cunningness to outsmart the cops, buoyed by a sense of overconfidence and sheer arrogance in what you’d want for the central villain; Munn’s pretty tough enough to be the actual counterpart to James in straight-laced smarts and gunmanship and Jeong is the film’s Leo Getz as a brilliant techno/party guy making better chemistry with James for additional comic relief, is a real asset. A real pity that Michael Rose’s contract hitman for Pope isn’t given enough screen time to really give the heroes some serious pause, but at least Shepherd makes a good foil against Hart in a battle of wits.

Ride Along 2 maintains those thrills and laughs and looks like a real franchise is being set up here, provided that the (possible) third act doesn’t peter out like most of them do and perhaps bring something new to the main characters’ in-law relationship without losing its bite between them.