Screenplay: Melissa Mathison; based on the children’s novel by Roald Dahl

It’s been a very long time since Steven Spielberg dabbed into lighter fares with his cinematic palette and he hasn’t lost his touch (much) for the adventure-fantasy The BFG, based on the 1982 kid-lit classic by Roald Dahl, in getting all the whimsical charm and dark humour the author would be amused with in this onscreen adaptation crafted with a certain amount of respect.

Roaming the hallways at night of a London orphanage is Sophie (Barnhill), the unofficial guardian during the witching hour with a tough and brave attitude, if only as a façade; against the things that go “bump” until one night she’s snatched by a big-eared giant (Rylance) and spirited away to his domain in the far-off Land of the Giants. Initially believed she’ll be gobbled up by him, she finds that he’s a gentle and shy vegetarian who eats bitter-tasting snozzcumbers and drinks a powerfully gassy brew called frobscottle that gets him all “whizpopping,” as he calls it.

Nicknamed by her as the BFG – Big Friendly Giant – Sophie also learns that her newfound pal is picked on by much bigger and meaner giants led by Fleshlumper (Clement) and his gang (calling him the “runt” of the group, ironically) who go around snatching and devouring kids at night and getting into all sorts of frat-boy antics when they’re not snoozing the day away. Discovering that BFG has a talent of concocting and harnessing dreams which he later injects them into people’s subconscious in their sleep, she and BFG come up with a plan that will hopefully put a end to their reign of terror, courtesy of the Queen of England (Wilton); before the bullies learn of their scheme.

Considering this year marks Dahl’s birth centennial, the film is a fitting tribute not only to the beloved author, it’s also one to the late screenwriter Melissa Mathison, who also wrote Spielberg’s other masterwork E.T. The Extra-Terrestrial – and for whom the film is dedicated to in memorandum – of her understanding of Dahl’s onomatopoeia with BFG’s dialogue and twisted sense of schadenfreude to the bad guys’ comeuppances when they come, she remained faithful to. Although it was kind of unnecessary to be too faithful in staying dated to a couple of 1980s references in the book that could be lost on today’s kids (I won’t spoil it here), otherwise the script and storyline is fine.

The director slips easily back into the fantasy game he hasn’t done since 1991’s Hook with the wide-eyed innocence that frankly has been missing from his work and the genre in general, even if he’s a bit apprehensive to go the full nine yards that make it look like a little rust is showing in handling BFG but at least he still has it in him. As always, he brings out fine performances from Rylance, whom he had directed in last year’s Bridge of Spies and earned him an Oscar for it as the titular biggie with a worldly, genteel manner; newcomer Barnhill as the courageous young orphan that coaxes BFG to be brave while looking for it herself with smarts and charisma without falling into those atypical precocious heroic kids that usually dominate Spielberg’s fares (see Indiana Jones and The Temple of Doom and Jurassic Park: The Lost World) and Wilton does her regal best being the accommodating British monarch, especially during one of the film’s funniest moment after taking a sip of frobscottle in a toast at Buckingham Palace, including the corgis; that’s… best left to the imagination.

Along with long-time collaborators John Williams providing a gorgeous score and Janusz Kaminski creating the rich and plentiful cinematography – the Dream Country sequence is a personal best here – The BFG provides a wondrous and entertaining family fare escape among the clutter of bombastic summertime cinema and overdone sequelitis (Finding Dory excluded), plus it could reintroduce Dahl back into children’s bookcases before J.K. Rowling’s Harry Potter craze did.

Franti spreads the love, steppin’ out with Jackson

It doesn’t feel like it’s been over a year since jazz legend and Toronto Jazz Festival co-founder Jim Galloway passed on, yet his legacy other than the music fest still remains with his Wee Big Band that continues intermittingly under the direction of rhythm guitarist Martin Loomer, along with some of the originals like bassist/former spouse Rosemary Galloway and pianist Ralph Frasier still going strong at age 91. On an overcast Canada Day that before long turned into a torrential downpour (see festival summary), their performance was as clean and simple as it got.

Sticking to mainly Duke Ellington to the playlist, Luder weaved his own stories in between tunes just like Galloway did – minus the puns – starting off with the Ellington standbys “Stompy Jones,” “Main Stream,” “East St. Louis Toodle-Oo,” “Cottontail” and “Lost in Meditation,” they allowed a little Harry James for “One On the House” with a nice robust finish to go with the ensemble crescendos aided along with trumpeter Steve Crow and saxophonist Dave Cauldwell.

Other performers that took command were lead trombonist Rob Summerville on “Sultry Serenade” and a bright new talent on saxophone Alison Young with her follow over the ballad “Where or When” and during “Stompy Jones.” Among the tributes in the hour-long program went to the late arranger Howard Cable who died earlier this year with the band’s take of “Goosey Gander” given with a bluesy smooth ease to its quirky little ending and what couldn’t be more Canadian by playing Ellington’s “Beaver Junction” for such an occasion than this?

Ending on a good closer with the quick-paced “Lunceford Special,” wherever Galloway is now he can rest assured that his Wee Big Band is in good hands with Loomer heading the ensemble to maintain old jazz traditions as he intended to and hopefully will be for years to come.

Spreading his “miracle activism” on a main stage stop here, folk-rocker Michael Franti and his band Spearhead spread the love and positive vibes in opening numbers “Hey Hey Hey” and popular hit “The Sound of Sunshine” by turning the main stage tent into a mega-party with oversized lemon yellow balloons and kids bouncing onstage with him and “Get Myself to Saturday” afterwards.

His performance, barefoot and all, hasn’t changed all that much since his last appearance in Toronto for Luminato some years back, but it certainly is a far cry when I first saw him as a opening act during the 1992 U2 Zoo Tour with his first group, the seminal industrial hip-hop duo The Disposable Heroes of Hiphoprisy, that was more darker and cynical with such tunes like their classic “Television, the Drug of the Nation.”

Still, it’s one of those fun shows that one can take families to when he can get both young and old to jam together, including a duet with special guest dancehall reggae artist Sharon Anderson with “Little Bit of Riddim’”; and praising his Canadian audience over their progressiveness in contrast to his fellow Americans and its current political landscape of creeping divisionism and xenophobia in the year of elections.

Other songs dominated the night like “We Are All Earthlings;” a love song to Franti’s Canadian wife Sarah, who was in the audience, “Life is Better With You;” a humble shout-out for his eldest son “I Got Love For You;” slower number “11:59” was a brief return to his rapper days then getting semi-acoustic for “Once A Day” to closing things up with an appeal for tolerance and equality about his own upbringing with his adopted Finnish-American family, wedged with a indirect reference to the recent Orlando Pulse shootings, with “My Lord.”

Some would consider all this a bit of a overkill with all this positivism going around, but considering the times that we live in you can’t go completely wrong with Franti ending “Little Bit of Riddim’” with “wise men count their blessings and fools count their problems,” is quite a philosophy to impart onto for daily living.

Popping out tropical beats and African polyrhythms with soft rock-jazz sounds was the mainstay for the Eric St-Laurent Trio with the lead on guitar, bassist Jordan O’Connor and percussionist Michel DeQuevedo with added keyboardist Attila Fias to the patio patrons and the passers-bys in their two-set gig at the Distillery Historic District watering hole on a much brighter day amongst the reddish-brown bricked buildings for some light entertainment to accompany the late afternoon.

Hints of Chet Atkins and Wes Montgomery could be heard in original material and contemporary covers of Eric Clapton’s “Tears in Heaven” and Horace Silver’s “Song for My Father” infused with some salsa undertones as done by DeQuevedo. Most interesting and curious was St-Laurent taking a ditty like “When Irish Eyes Are Smiling” by slipping in a Mark Knopfler-like groove during the broadcast of a EuroCup game that almost got drowned out by the goal cheers, but at least the band’s presence was appreciated at the venue. 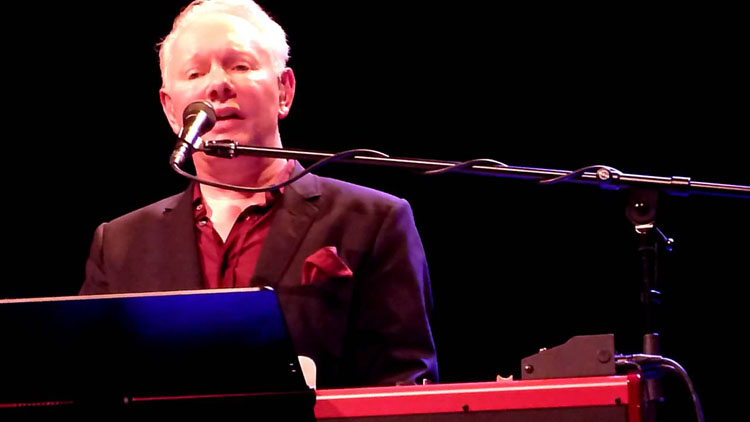 A man of many musical hats he’s shifted over four decades of recording and a bit of an iconoclast to the conformities of the money-driven music industry, Joe Jackson started his concert with a few solo numbers on keyboards before bringing on his touring back-up band of longtime bassist Graham Maby, Teddy Kumpel on guitar and drummer Doug Yowell with a few familiars “It’s Different for Girls,” “Home Town,” “Be My Number Two” and the title track from his new release Fast Forward (Caroline/UMG), about a semi-optimistic perspective on the difficulties of the world today, that got things going in the right direction.

Basically a set that went with the crowd-pleasers to brand new songs over a good 90 minutes, ‘70s pop classics “Is She Really Going Out With Him?”, “So Close” and the ‘80s jazz-pop winner “You Can’t Get What You Want (Till You Know What You Want).” From Fast Forward , that was meant to be a four-track EP project that turned into a album in four parts recorded in New York, Amsterdam, New Orleans and his current home of Berlin; Jackson had a lot of poise and command in telling stories through his music with “A Little Smile” and “Kings of The City,” a song about the experiences of culture shock and understanding the rhythm of moving to a large city, plus giving a little honky-tonk for “Keep On Dreaming” and a rock re-imagining of Beethoven’s “Ode to Joy.”

Doing his what he called his “song de jour” by pulling a random tune out of a hat, he belted out a pretty good cover of ABBA’s “Knowing Me, Knowing You” and was well received playing a melodica near-end for “Stormy Rivers.” Doing a slower, cooler rendition of his biggest hit “Steppin’ Out” was a stroke of genius to closing out with a hard rocking “Ready to Go” and quieter solo piano run on “A Slow Song,” Jackson retains his sense of sensibility and open rebellion for a packed tent that welcomed him.

Light on the jazz and leaning more on the popular sounds, it wasn’t all that bad on the line-up for this year’s festival; other than the only sour note of having the July 1 JAZZ-FM 91 Youth Big Band concert being cancelled at the last minute due to sudden inclement weather. Being that this is their thirtieth anniversary and that it’s managed to survive this long is a triumph in itself by keeping a balanced mix and open mind ensures the event to continue for hopefully another thirty years. It may no longer have the luxury of getting exclusively the jazz greats (and unknowns) on a regular basis; at least one can never say that the favourite summertime music event is ever boring.