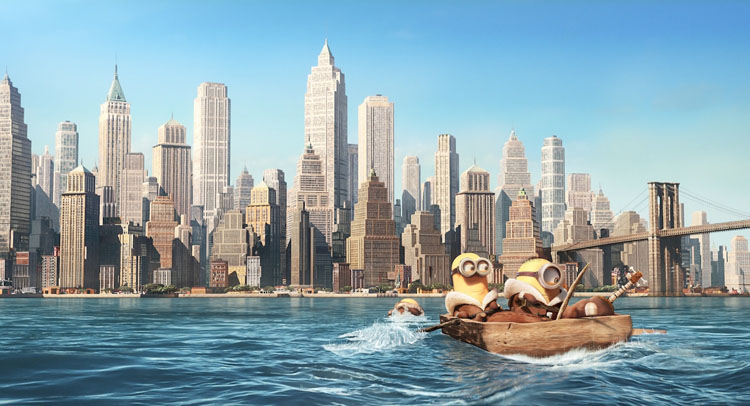 Those humorously hapless henchmen from the Despicable Me series get their own film treatment for the comical crime prequel Minions, as voiced by co-director Pierre Coffin; outdoes itself as the funniest animated film of the summer by far with some low-brow laughs that means well enough to keep the kids entertained as much as the adults who will find something to chuckle about.

Much as it is an origin story narrated by Geoffrey Rush, it turns out these little freaks of nature with a banana fixation have been around since the dawn of time with only one purpose in life and that is to mindlessly serve the biggest and baddest on the food chain from the Tyrannosaurus rex through to human history’s less-than-exemplary figures before Gru with often disastrous results.

Taking an unexpected and (very) lengthy Rip van Winkle-style exile during the Napoleonic Wars, their meaning of their existence wanes over the decades which brings about the rise of one de facto leader, Kevin, to go out and seek a new boss before their society fades into oblivion. With musician-type Stuart and child-like Bob accompanying him into the outside world, they find themselves in 1968 America and after a series of misadventures in New York City the trio stumble across Villain-Con, a super-secret fan convention for bad guys, to find the right evil boss to follow.

Hitching a ride down to Orlando, Florida with the Nelson Family off to Villain-Con – and robbing a bank en route – they encounter who seems to be their dream supervillain, the stunningly gorgeous if sadistically dangerous Scarlet Overkill (Bullock) who hires them on the spot and jets them off to England to pull off the grandest caper of her career: steal the Royal Crown at the Tower of London and usurp Queen Elizabeth II (Jennifer Saunders) from her throne for world domination. But of course, with these three bunglers and their kindred at her command, things don’t go smoothly as planned…

Minions just rolls out as formulaic as it can script-wise by Brian Lynch in putting out the usual gags and slapstick mayhem they’re known and loved for, which is funny at times with their garbled gibberish language and antics that seem to flow almost non-stop with a few breathers installed, feeling a bit rushed in the approach. But that doesn’t matter much here at all, considering who the core audience the filmmakers are targeting at.

Bullock, in her first villainess role; chews up all her scenes with a deadly, delicious cocktail of sexiness and mercurial hilarity with John Hamm as her hippy, cool partner in crime and marriage/gadget man Herb, who has a arsenal of tech toys that could make James Bond’s Q Branch of MI6 look like a generic corner hardware store; is just as funny. Despite Allison Janney and Michael Keaton’s shorten roles as the criminal matriarchal and patriarchal leads of the Nelsons, they play it with a sense of the eccentric and naivety in bringing onboard the Minions to their dubious activities and the world of badass villainy worth a few giggles.

It may not have the smarts and/or emo of this year’s Inside Out, Minions is simply crazy and purposely hammy fun, saddled with the typical late-1960s soundtrack of Anglo-American rock and pop classics for added effect, with those loveable yellow lackeys with hearts. Plus, stick around for the end credits closer as well.

When the second trailer for the hotly-anticipated Star Wars: The Force Awakens that came out a few months ago ended with an aged, but still roguish Han Solo along with his Wookie sidekick Chewbacca with a grin on his face and saying: “Chewie…we’re home,” everyone was reassured that the old magic had been placed in the seventh instalment of George Lucas’ space opera coming this Christmastime.

Recently announced is the news that had been floating around for about a good number of years since the return of the Star Wars saga to the screens are the anthology spinoff projects to sandwich in between the third trilogy – the first one, Star Wars: Rogue One directed by Godzilla (2014) director Gareth Edwards coming in December 2016 – featuring the swashbuckling Corellian pilot of the Millennium Falcon in the days before the Rebel Alliance, to be directed by hot commodity filmmaker duo Christopher Miller and Phil Lord, the geniuses behind recent smashes The LEGO Movie (which had a must-see hilarious parody cameo involving the famed spacecraft with Solo, Chewbacca, Lando Calrissian and C-3PO in that film), Cloudy With a Chance of Meatballs and the 21 Jump Street film series; slated for a May 25, 2018 release date.

“This is the first film we’ve worked on that seems like a good idea to begin with,” they said in discussing the yet-untitled Han Solo project. “We promise to take risks, to give the audience a fresh experience and we pledge ourselves to be faithful stewards of these characters who mean so much to us. This is a dream come true for us. And not the kind of dream where you’re late for work and all your clothes are made of pudding, but the kind of dream where you get to make a film with some of the greatest characters ever, in a film franchise you’ve loved since before you can remember having dreams at all.”

The screenplay will be handled by none other than Lawrence Kasdan, who was behind the scripts of the first Star Wars trilogy’s latter halves The Empire Strikes Back, Return of the Jedi and current The Force Awakens, as well as Raiders of the Lost Ark, The Big Chill, Silverado and Grand Canyon, also is executive co-producer of the Solo film. And helping him co-write will be his son Jon, himself an accomplished writer/director of several film and television projects, including the 1990s TV teen rom-com staple Dawson’s Creek to cinematic indie film The First Time.

“We’re so excited to be working with Chris and Phil, who will bring a fresh new dimension to the Star Wars Universe,” said the Kasdans. “They’re two of the smartest, funniest and most original filmmakers around and the ideal choice to tell the story of Han Solo, one of the coolest characters in the galaxy.”

No cast has been slated yet, especially who will be filling the shoes of the coveted titular role, even with a few rumoured mentionables in mind from Zac Efron to Chris Pratt – but as Star Wars prequel trilogy producer Rick McCallum once questioned in an interview at the time, when they axed an early idea of introducing Solo in the last film Revenge of the Sith : “Who could play a ten-year old [original actor] Harrison Ford?” – the rough storyline will basically focus on the origins of the young space pirate/pilot extraordinaire and how he ended up working for the vile galactic crime lord Jabba the Hutt.

Producer and Lucasfilm president Kathleen Kennedy says she can’t wait to discover what the directors and screenwriters will come up with, adding: “It’s not just any filmmaker who can tell the story of such a beloved icon like Han Solo and I’m excited to say that we’ve found the perfect team to handle the task. Larry and Jon know all there is to know about the character and Chris and Phil will bring their wit, style, energy and heart to tell Han’s story.”