One of Shakespeare’s defining dramas Julius Caesar has always been its most celebrated examined and re-examined of the Immortal Bard’s canon on the dicey realm of politics. In Canadian Stage’s double-bill production for their 33rd year in High Park, it does discuss the beast of ambition within the play, but in director Estelle Shook’s take on it, one has to wonder if too much ambition involved here causes it to stumble.

Trying to do somewhat of a retro-modernist take on the Roman era tragedy, the arrival of Julius Caesar (Allan Louis) from a successful military campaign in Spain is treated with less than deserving accolades from dissenting senator Cassius (Allegra Fulton) who fears that Caesar will extend his power from becoming a full-fledged emperor of the Roman Empire and truly turn the republic into a dictatorship.

Convincing an otherwise reluctant Brutus (Sean Baek) into the extremes Cassius and other senators are proposing and having to hide it from his fretful wife Portia (Jessica Greenburg), the infamous Ides of March fall upon the fateful day of reckoning that will be countered by the logical Marc Anthony (Dylan Trowbridge). In the aftermath where he leads a counterrevolution of sorts via the public’s lynch-mob mentality, the conspirators are forced to flee and the impact on the republic will have on its survival and to cling onto the virtues of a fledgling democracy not ruled by irrational deeds, but decent rule of law.

The twelve-member ensemble does its best to present these ideas with their various roles they take on from the main characters to bit parts for Brook’s vision that picks up in the beginning, but falls flat in the third act in structure and delivery amidst the chaos that comes with the violent aftermath by the director who doesn’t know what context it should come under in trying to appease modern audiences.

Out of the strongest of portrayals, Louis, Trowbridge and Michael McManus come through and the rest of the cast are relatively fine. Even the very minimalist set by Teresa Przybylski and Brad Trenaman’s lighting design do show up well, although some of the costume designs from Michelle Tracey seem a bit muddling to comprehend, as much as Fulton’s laying on the conviction based on insanity for Cassius too thickly for her and the play’s own good.

As Brutus states early in Julius Caesar,“Let us be sacrificers, but not butchers.” It’s an unfortunate shame the stage producers of this play decided to go for the latter that can’t seem to find a straight direction in the final end to be anything close to satisfactory. 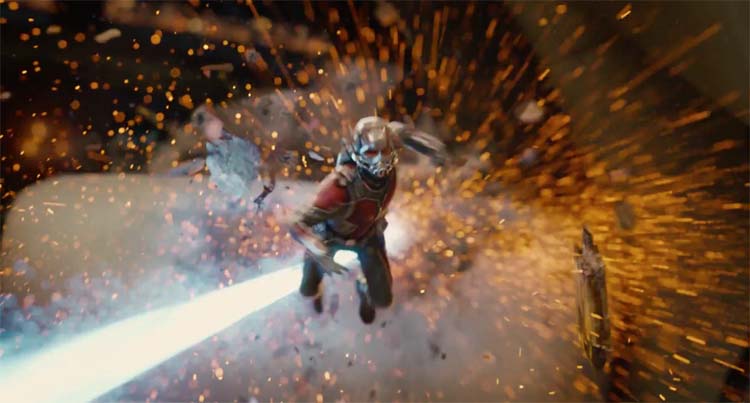 How much can one mine out of one’s own superhero trove is anyone’s guess when it comes to Marvel’s latest comic book to get their own onscreen slot to be bankable, Ant-Man. First published in 1962, it’s needless to say it holds some promise in being its most humour-laden one yet with plenty of action-packed appeal to the fan-boys and -girls crowd, smartly focusing mostly on redemption and the consequences of unimaginable power.

Reformed cat burglar Scott Lang (Rudd) leaves on parole, having gone to jail for a Robin Hood-esque robbery on a corrupt multinational; is a sincere sort looking to make something of himself, if not for his beloved young daughter Cassie (Abby Ryder Fortson), but is having a hard time landing a steady job due to his prior felony and despite being a electronics expert.

He decides to pull a seemingly all too-easy job out of desperation on a tip courtesy of his ex-con buddies Luis (Michael Peña), Kurt (David Dastmalchain) and Dave (Tip “T.I.” Harris) on a ritzy mansion’s safe and finds what appears to be a old motorcycle outfit and helmet, not realizing it’s a power suit capable of shrinking the atomic relative distance of the wearer's structure down to size and giving one super-strength.

After a freaky trial run with the suit, Lang runs into its creator Dr. Hank Pym (Douglas) who is looking for someone to wear it to become the next Ant-Man as he once was during the Cold War period – and an ex-member of S.H.I.E.L.D. – much to his estranged daughter Hope’s (Lilly) protests. With the added ability of mind control to communicate with ants to be able to use their mobility and strengths, Lang’s first mission is to stop Darren Cross (Stoll), Pym’s brilliant former protégé-turned-CEO of the company he formed and got shoved out of years ago; from breaking the very formula he invented to launch his own line of military-grade exoskeletons called Yellowjackets from getting on the market that could be used for evil purposes.

Ant-Man is a kind of refreshing return to the days when superhero films just went with the fun aspect of it all with a few Marvel Cinematic Universe (MCU) and pop culture references, instead of drenching itself with all the angst-riddled themes we’ve been besieged with that’s become old hat and a little repetitive over the past decade-and-a-half (yes, I’m talking to both of you, DC and Marvel Comics).

However it doesn’t completely leave that territory either, what with a person looking to correct the mistakes he made despite the good he intended, including some tense parent-child relationship issues involved worked over from the witty, fast and furious script by Edgar Wright (originally tapped to direct this film, but left over creative differences), Joe Cornish, Adam McKay and Rudd that Peyton Reed manages to helm all of this quite competently along with some really cool special effects (I smell Oscar-material here).

Rudd slips into the role as an average guy made accidental superhero with genuine charisma much like an ex-con Peter Parker-type; Douglas commands as the mentor/genius with some dashes of grump and remorse tossed in; Lilly plays a all-out gutsy daughter looking to find approval in her father’s eyes, while dabbling in a little cat-mouse clash with Lang very well; Stoll is definitely the nastiest and craziest baddie to come out of the Marvel ranch in a while that he should land on the SPCA’s Top Five Vivisectionists List alone and most of all, Peña, Dastmalchain and T.I. as the street-smart comic relief trio with great timing (love the way Peña breaks down his tips as being some of the film’s funniest moments).

Along with some MCU alumni joining in to lay the brickwork for 2016’s Captain America: Civil War and other future instalments – stay for the closing credits epilogues – Ant-Man provides stiff competition as the newest superhero on the block willing and able to connect itself with the common person that’s been missing from this genre for quite a long time.