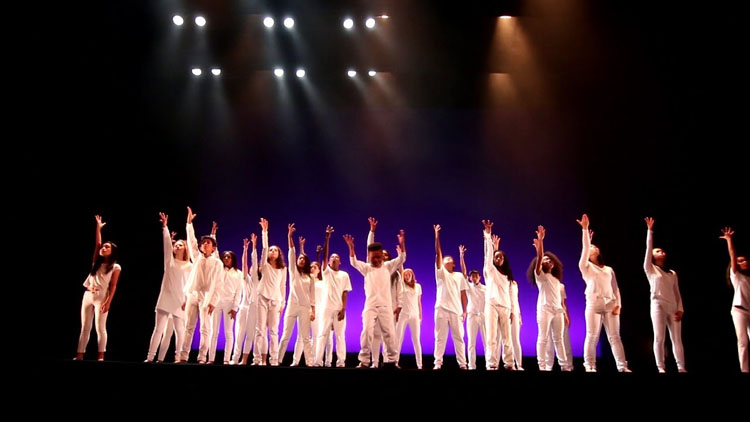 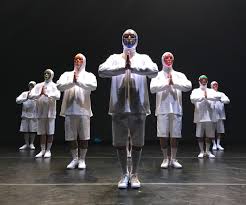 The two-day international hip-hop showcase Breakin’ Convention from England’s Sadler’s Wells may not be the first production of its kind embraced by Luminato in its eleven-year history, but it sure was its grandest in bring the best b-boy/-girl dancers from across the world and Canada in fine fashion in how the American street art form has been interpreted and remade from the seeds sown over the thirty-five years since its birth.

Emceed by its founder/artistic director and a pioneer of British hip-hop culture himself, Jonzi D brought out what hip-hop can offer not just to the masses, but also to contemporary dance theatre as being viable, thriving and legit, starting the first part with the Brampton entourage JJHA Performance Company with their short piece on recent urban violence in America, “Glory World.” A mishmash rework of John Legend and Common’s Academy Award-winning “Glory” and the seminal Lionel Richie/Michael Jackson tune “We Are the World” as done to a tight sequence by company founder-choreographer Jade Jager Clark, the meld of gospel-pop by this large group ranging from 8- to 20-year olds (the youngest members amaze) opened up strong and inspirational.

Toronto’s The Moon Runners Dance Crew took on a more conceptual turn with their number “Geometric Steez” that was more cerebral with a touch of early 1980s old-school flavour; whereas the seven-member The Surgeons did a satirical breakdown of b-boying physics in “The Cypher” in slowdowns, breakdowns and personal second-guesses during a dance circle jam.

From Montreal came the physically-challenged Canada/Australia duo RoyalLazyness challenging against stereotypes of the disabled for “Creatures” with Luca “Lazylegz” Patuelli and Roya “The DestRoya” using their crutches and office chair to perform their boundless moves that literally got them a standing ovation from the audience and the acclaimed South African crew Soweto Skeleton Movers’ “Seven 7,” as the four-man team pulled their now-famous magical hat trick and incredible contortion acts to the sounds of pantula (dance music) that these guys could seriously teach Cirque du Soleil a few lessons in.

After its 45-minute break (not uncommon in British theatre) another Montreal crew LockUnity had their funerary “Requiem” about the demise of street dance in many sequences as the members gather around a casket in many stages of bereavement and resurrection, accompanied by trumpeter Danny Depoe in his solo; and in its joyous rapture of a New Orleans-inspired Dixieland funeral procession. 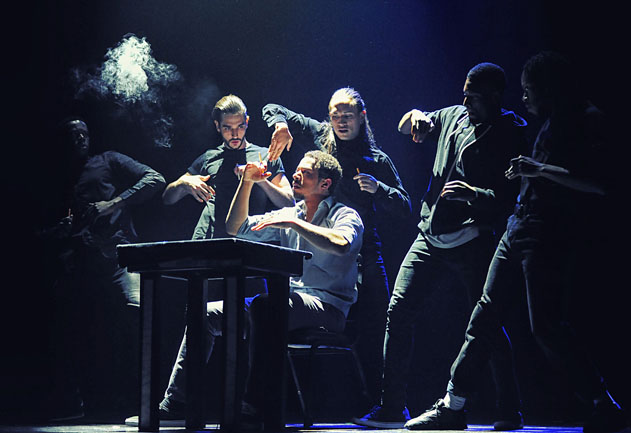 “Vice” by Britain's BirdGang Dance Company worked as a brilliant fever dream about addictions as a office drone tries to break away from his desk, mundane existence and demons as a lone woman offers him that chance to change all that. And closing out was the South Korean group Just Dance to offer incredible prowess through Zen-like performances with “The 7 Human Emotions” using Eastern philosophy, traditional drumming and masks and a hip-hop remix. Its discussion is heavy-set, yet so balanced about the complexity of Korean culture reconciling between the old and the current on the frailties of humanity and emotional planes it must deal with in everyday life.

To the offside, the visual arts leg of Breakin’ Convention got a chance with local artists SKAM with their vivid exterior mural installation of the centre's facade and inside the main east lounge area with the custom ink panels of Rei Misiri capturing the energy of b-boying like “Urban Games” or calligraphy-like pieces of “The Angles” and “The Senses”; Shirley Mpagi’s two- and three-toned roughened lithographic prints “The Kid Who Digs,” “Who Am I” and a untitled wood-burning and pigment piece of saint-like figures and pan-African tricolours to the stark monochromatic untitled portrait of a b-boy done with graffiti tagging signatures by Jon “Drops” Reid.

Serious props need to be made out to Sadler’s Wells, Luminato, the Sony Centre and Jonzi D in bringing the first-ever Canadian version of Breakin’ Convention to Toronto in doing a proper and balanced ensemble of international and local acts and groups to the stage and as the artistic director promised onstage; it hopefully won’t be the last one, either. 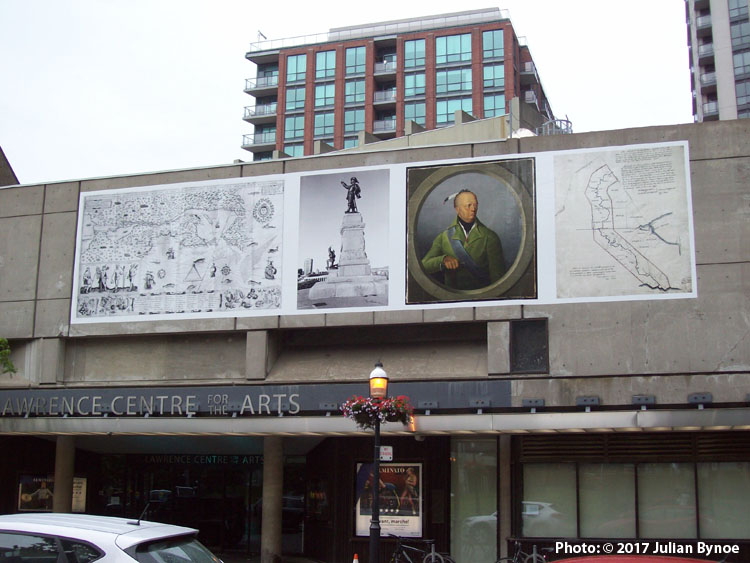 Commissioned by the Art Gallery of Ontario, Iroquois photographer Jeff Thomas’ four-panel 76.2 x 304.8-centimetre pigment print on archival paper outdoor installation Imposition of Order depicts a direct, if gentle reminder of where this city resides on Tkaronto (present-day Toronto) or “meeting place” with the usage of historical cartography maps and images hanging just above the St. Lawrence Centre on just a little bit on reclaimed land from where the original shoreline of Lake Ontario used to be on. 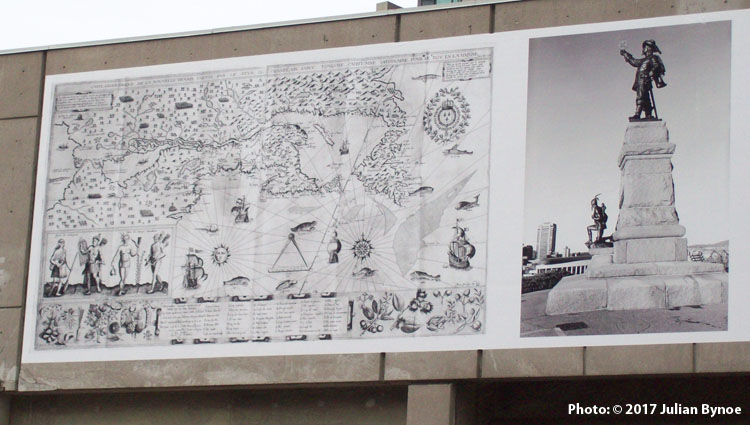 As the first photo shows the first recorded map of the St. Lawrence Seaway in 1612, two of its more central images, a vintage black-and-white photo of a Ottawa statue at Nepean Point right behind the National Gallery of Canada has the European explorer Samuel de Champlain standing high atop the pedestal while a First Nations warrior is strategically (or rather purposely) placed beneath in a kneeling position as giving notice of conquered land (now renamed as the Anishinabe Scout); and a portrait of Mohawk chief Thayendanegea (a.k.a. Joseph Brant) by William Berczy (right across from Berczy Park) who helped British forces during the American Revolution, only later to relocate to the Six Nations Reserve of Upper Canada after their loss to the revolutionaries and further broken promises by both parties. 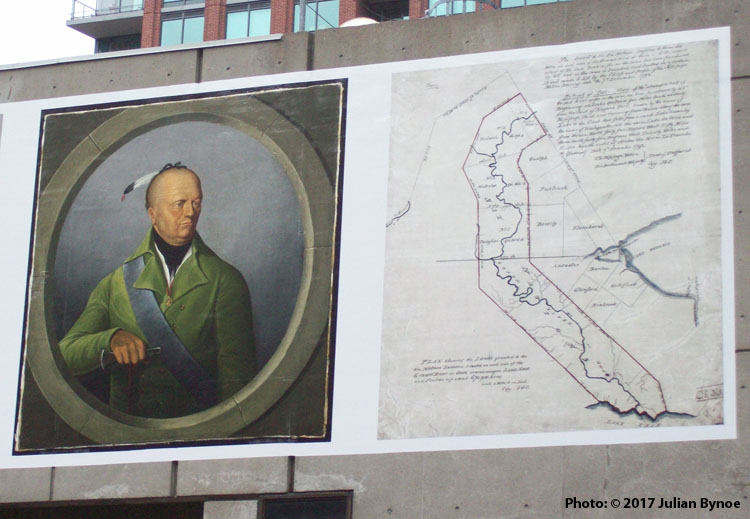 Next is The Haldimand Tract map of the land the Six Nations were given in gratitude for their services by the British of establishing the limiting boundaries for the First Nations community that promised them 3,844.5 square kilometres along the Grand River but now today only 194.2 square kilometres is occupied by them; fully completes and connects this instalment brings around the actual founding of Upper and Lower Canada (now Quebec) by the establishing colonizers of Britain and France respectively and the indelible impact on the indigenous populace and environment where we now stand and must give notice on its original land stewards.

Luminato 2017, in returning back to its roots; has that familiarity in bringing in something familiar yet new to the programming line-up with a feel-good sense and for the first time in its history, giving credence to accessibility for all to its venue and format without overstating it and in recognizing First Nations’ issues that should go a long way in future editions. Although more could have been done in regards to visual arts, this “welcome back” is a more than promising and hopeful restart of things. 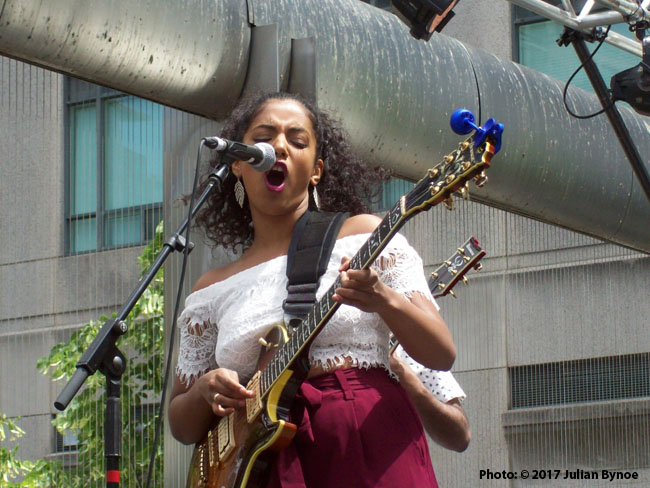 Guitarist Meghan De Lima performing in the Yorkville area in competition for the annual Toronto Blues Society Talent Search on the first weekend of the Toronto Jazz Festival.

Managing to catch the last three acts of the Toronto Blues Society Talent Search Finalists, now in its twenty-second year; on a brief sunny break in a rainy week that opened the first weekend of the Toronto Jazz Festival where the Village of Yorkville Park venue held the event to some pretty amazing local talent in the half-hour slots they were given, even if blues music wasn't their major staple to their genre.

For instance, first act Oakville guitarist Meghan De Lima’s material mostly sat in the R&B/soul department with tunes like “Like You Do,” “My Own Little World” and “I Don’t Want to Stop,” but at least her first number “Burnin’” was a solid funky-blues notion that was easy on the ears and stuck to the chords in question. Plus, having a blue ribbon bow on her guitar did add a sense of cuteness that could get lost with some blues purists. 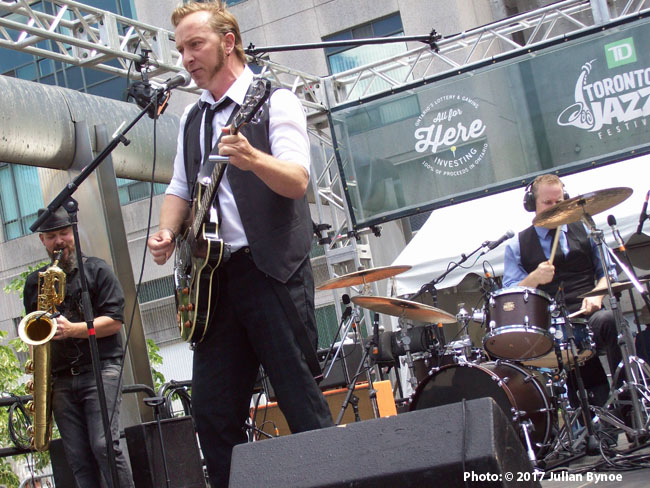 Unapologetically self-describing their music as a bourbon-fuelled, funkabilly grunge blues, indie Toronto band Jim Dan Dee rocked it hardcore from the get-go with the totally rebellious “F’d Up” with headman Jim “Dan Dee” Stefanuk on lead guitar, drummer Shawn Royal, keyboardist Scott Morris and Jason “Bobby” Sewerynek, followed by other songs “Killer,” “Save My Soul,” “Down to the Devil” and “The Way She Makes Me Feel.”

Giving them some competition was Sudburian group Sulphur City, as fronted by singer/washboard player Lori Paradis who isn’t afraid to let it rock it out loud in her Joplinesque range, aura and actual blue-collar life experiences along with guitarist Jesse Lagace, bassist Steve Smith, drummer Sam King and keyboardist Keith Breit; played some raw and heavy country-blues on “No Holy Man,” spreaded a little Cajun for “Devil That Night” and the anti-war anthem “War Going On.”

While it was Torontonian bluesman Dan McKinnon who eventually won, the last two acts certainly had an edge in playing the blues to the crowd that showcased some talented Canadian blues players in earnest. 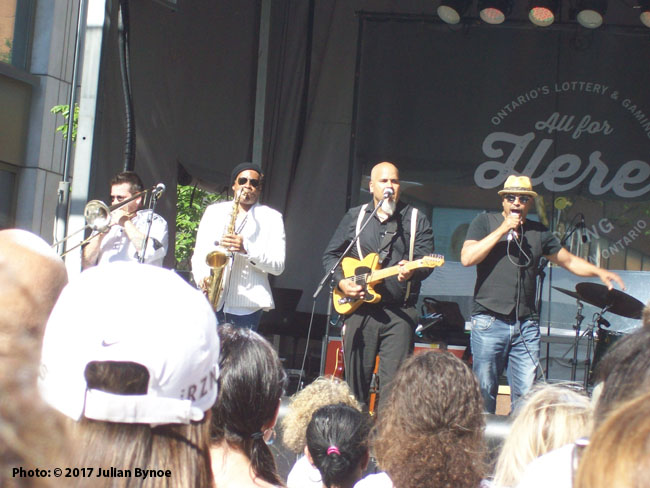 Continuing the legacy of their father, the legendary local R&B star keyboardist Bobby Dean Blackburn who is still going strong at age 70; the Juno-nominated namesake ensemble consisting of sons Duane on lead vocals/keyboards, Brooke on vocals/guitar and Cory on drums and bassist Andrew Stewart in reeling in the traditional blues, soul and funk during their gig in the tony shopping district.

Starting with the old chestnut “Everyday I Have the Blues,” a little New Orleans-flavoured blues groove slicked right into “Walking in New, New Orleans” and their own material “Talking Outside Your Head,” “Still Taking Care of Business” and “Down Home Blues” to a slower jam “The Lowdown” to a captivated audience for their hour-long concert.

Ending with the Neville Brothers classic “Sister Rosa” on the American Civil Rights icon Rosa Parks, Blackburn kept it smooth and simple with their performance and energy to the early evening crowd with warm vibes.

Toronto Jazz Festival 2017 continues through to this Sunday (July 2). For tickets and information, visit torontojazz.com. NOTE: The July 1st Aretha Franklin concert at Sony Centre has been postponed due to health reasons and has been rescheduled for the 2018 Toronto Jazz Festival on July 28, 2018. Ticket holders that purchased through Ticketmaster or through the Sony Centre Box Office will be contacted and will have the option of keeping their tickets and using them for the new date, or will receive a full refund of their ticket order.