Beauty and the Beast (Walt Disney)

Screenplay: Stephen Chbosky and Evan Spilliotopolus; based on the 1992 Walt Disney animated film and tale by Jeanne-Marie Leprince de Beaumont

Oftentimes as they’ve done in the last few years in rehashing their animated masterpieces into live-action versions, Walt Disney has had a pretty good record in maintaining the spirit of the original inasmuch as inject some fresher material to stand it apart. For their remake of the 1992 musical fantasy-romance classic Beauty and the Beast, they’ve kept it aloft in the same manner, yet some of the magic is kind of missing.

Our heroine Belle (Watson) is a bright and bookish young lady in her provincial town in pre-revolutionary France which is frowned upon (most telling moments are when she’s scoffed at by teaching a young washer girl to read by one of the menfolk and being inventive in finding a new way to wash clothing) while trying to fight off the advances of the hunky, narcissist hunter Gaston (Evans) to be his bride, when all she wants is to find a kindred spirit to her liberated soul.

Finding out that her doting widower father Maurice (Kevin Kline) has been imprisoned by the Beast (Stevens) for plucking a rose from his garden on her behalf, she takes his place and finds that the Beast’s castle is filled with inanimate objects bearing the spirits and personas of his servants. As the illuminating candelabra footman Lumière (Ewan McGregor), cautious clock butler Cogsworth (Ian McKellen) and motherly teapot cook Mrs. Potts (Emma Thompson) see Belle as the one who can break their master’s spell if she could fall in love with him, unless time and Gaston and his sideman LeFou (Gad) conspire against them in their plans of making them all human again.

Creating more fleshed-out back stories – in particular of how the Beast became the cursed beast to why Belle is a motherless daughter – and a couple of new tunes to the soundtrack catalogue with surviving tunesmith Alan Menken with the help of Andrew Lloyd Webber’s go-to lyricist Tim Rice like “Days In the Sun” and operatic (if slightly overkill) “Evermore,” gives some depth and punched-up humour to it from screenwriters Stephen Chbosky and Evan Spilliotopolus’ to the original screenplay of Linda Woolverton and Anthony Van Laast’s choreography is on par here.

And announcing that Gad’s LeFou is a “openly” gay Disney character that yearns a unrequited love for Gaston, supposedly in keeping the film’s LGBT history in line from the late lyricist Howard Ashman who posthumously co-won the Academy Award for Best Original Song “Beauty and the Beast” to Cogsworth voiced by the then-closeted David Ogden Stiers and now in the flesh by McKellen; does add more a little more fun to the role but it wouldn’t offend for today’s younger audience members for concerned parents (unless you live in Alabama, Russia or Malaysia).

While it entertains for the most part thanks to the radiant performances by Watson and McGregor in song and act (“Be Our Guest” is still the showstopper highlight next to the iconic ballroom dance scene to the title track and barroom sequence to “Gaston’s Theme” led by Gad) and Stevens brings a honourable grace to the Beast, director Bill Condon really had a hard act to follow despite his deft direction and dramatic poses without, thankfully, doing a shot-per-shot remake that wouldn’t have done the film any justice, that this version lacks a certain vibe to it that made it lovable in the first place.

If you loved the original like I do, this slightly darker version will make some of its fans happy enough – compared to its IMAX, sing-along and 3-D reissues of 2002, 2010 and 2012, respectively and the 1994 Broadway musical version – but this Beauty and the Beast feels like it has finally exhausted its energy in the pop culture lexicon its beholden onto for so long.

The Academy Award-nominated Québécois antiwar classic The Dog Who Stopped the War gets a free showing April 16 as part of TIFF Kids Film Festival, celebrating twenty years this year.

In the days way before TIFF Lightbox (350 King Street West) was still a mere twinkle in the cinema organization’s eye, the film advocacy was reaching out toward its future audiences by exposing the littlest filmgoer to what film can do in terms of growth and educating, as well as amusing its toughest audience and critics of all: kids. Thus, the TIFF Kids International Film Festival was born with this year hosting 18 diverse programmes and showcasing over 125 Canadian and international live-action and animated films, starting April 7 to 23 with free and ticketed events.

“We are thrilled to be celebrating our twentieth anniversary with a programming lineup that reflects that excitement and features our biggest and best programme to date,” said Elizabeth Muskala, Director of TIFF Kids and Youth Learning. “With over one hundred-and-sixty films from over forty countries, the range and breadth of work presented at this year’s TIFF Kids Festival is sure to enlighten, entertain, and engage audiences of all ages. The 2017 lineup shines a spotlight on thought-provoking stories that explore diverse themes of home, family, identity and immigration. With titles such as Mauro D’Addio’s road adventure On Wheels; Michel Boujenah’s touching Heartstrings; the sweeping new Disneynature documentary Born in China directed by Lu Chuan; and the beautifully animated Ivan Tsarevitch and the Changing Princess from master storyteller Michel Ocelot – the festival presents films that tell both unique and global stories that moviegoers are sure to connect with.”

As a charitable cultural voice for the city and the nation at large, the fest isn’t just some money-making venture for TIFF to expose children to cinema beyond the mindless Saturday morning TV cartoon trappings (but more on that shortly, ironically enough). All proceeds from the screenings will support its Pocket Fund, which provides free access to TIFF programming for thousands of young people in need each year. Contributions to TIFF Pocket Fund will ensure children and youth, no matter what their financial circumstances are, to be able to experience the joy, wonder and universal power of film.

In view, it’s a lot more extensive children’s film festival than those times when they had to rent out several downtown cinemas to present their roster and more interactive with not only issuing kids their very own TIFF Kids Passport and tour the world, with 41 countries represented in this year’s line-up, where kids can get a stamp for every feature film and shorts programme they attend. Once they have collected three stamps, they can visit the Passport Bureau during the weekends of the TIFF Kids Festival to claim a prize; as well as being part of the critical process of film judging through the TIFF Kids Festival Young People’s Jury Awards, People’s Choice Awards and two awards selected by an adult jury, the TIFF Kids Festival continues to create a forum where kids’ voices can be heard on April 23.

Opening night film is the third Smurf film given its Canadian premiere on April 7, Smurfs: The Lost Village , based on the beloved Belgian comic characters and 1980s Americanized cartoon series; where a 5 p.m. pre-screening party will commence as TIFF Lightbox will be transformed into a colourful Smurf Village; including other features ranging from the Academy Award-nominated flicks My Life As A Courgette and The Dog Who Stopped the War; the coming-of-age 2002 TIFF People’s Choice Award winner Whale Rider celebrating its fifteenth anniversary release; last year’s TIFF Kids Official Selection, the antiwar The Day My Father Became a Bush from the Netherlands to Germany’s Rabbit School. 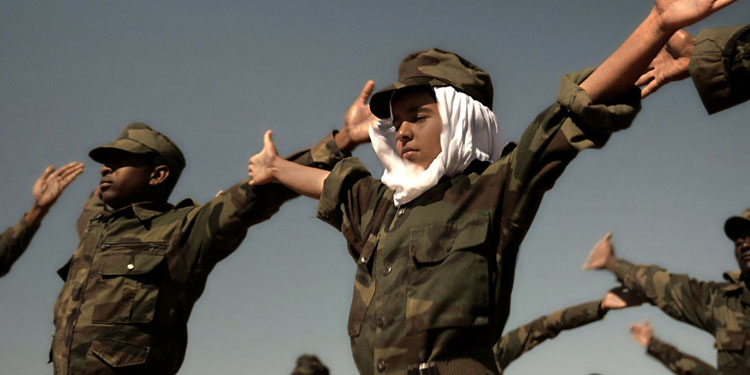 Eimi Imanashi’s Battalion to My Beat showing in the Reflections programme (April 10, 13-15, 18 and 23) explores a young teen (Mariam Omar Ahmed) trying to find liberation for her people and herself in the disputed Western Sahara region.

Shorts to be shown include Elephants as kids will stomp along with the elephants to the music of They Might Be Giants; the critically-acclaimed Côte d’Ivorie short Get Up Kinshasa! about ten-year old Samuel trying to improve his appearance to be able to go to school; Mexico’s animated parable about patience with a young gardener in El agujero (A hole) ; the Netherlander film Safia’s Zomer (Safia’s Summer) of a refugee girl relocating from her native Libya; from Brazil comes a tale about a mysterious cloudy mountain with Nimbus, The Cloud Catcher and a couple of rarities from the Western Sahara on a rebellious teen girl growing up in a Saharawi refugee camp in Battalion To My Beat and the Maltese family melodrama of a boy in search of a rare fruit for his grandmother’s birthday, Bajtra tax-Xewk (Prickly Pear).

With a focus on Canada’s sesquicentennial, the fest will have the free screening of the classic CBC miniseries adaptation of Anne of Green Gables as introduced by its director Kevin Sullivan; the Canada on Screen: Short and Animated programme showing its short animated masterpieces ranging from Norman McLaren’s Begone Dull Care, Oscar winner The Sand Castle and the ever-immortal tale on our national winter pastime, The Sweater, which will also be part of the one-day, coast-to-coast celebration of Canadian features and shorts National Canadian Film Day 150 on April 19. 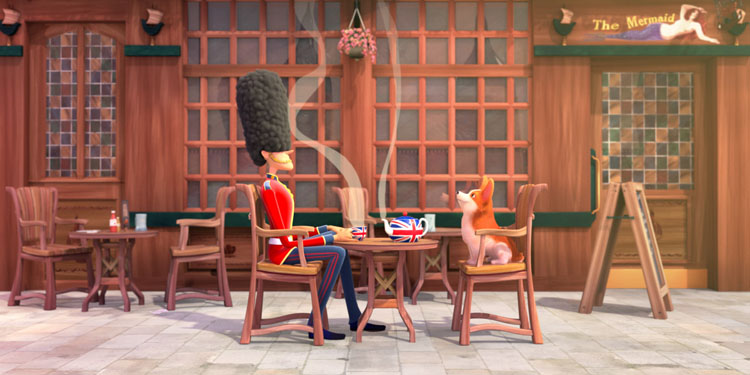 French-produced pantomime short Jubile follows the funny journey between a Buckingham Palace guard and one of Queen Elizabeth’s corgis through the streets of London in the Loot Bag Senior: Inspiration x Imagination programme (April 8, 16-17 and 23).

For the April 23rd closing night comes four episodes of Ronja, the Robber’s Daughter directed by Goro Miyazaki follows the adventures of a young girl raised in a mountain fort by her parents and a loving band of robbers. Based on Astrid Lindgren’s book of the same name, this all-new series beautifully blends the classic storytelling of the original with the magical visual style of Studio Ghibli, which also was the winner of the 2016 International Emmy Kids Award for Animation.

The fest will also show the Canadian premiere of two episodes from Disney Channel’s new animated prequel series Tangled: The Series with Rapunzel (Mandy Moore) and Eugene “Flynn Rider” Fitzherbert (Zachary Levi) on more hair-raising adventures to the 2010 hit feature and the shorts programme New York International Children’s Film Festival: Birthday Shorts, which is also celebrating their twentieth anniversary this year with a selection of new and classic shorts from their two-decade history, filled with stories of growth, change and transformation.

Apart from film, families can explore the current digiPlaySpace, an interactive exhibition dedicated to interactive art, design, technology and free onsite activities; the mystery breakfast event Pancakes, Waffles and Garfield and Friends on April 15 where pancakes and waffles will be served along with a screening of the animated classic series of the comic strip cat and Collaborative Art Project: Northern Lights headed by Toronto-based artist and designer Molly Grundy who works in everything from stop-motion animation and illustration to costume design and installation, as this Canada on Screen collaborative art project will transform TIFF Lightbox’s third floor using 16mm animation filmstrips made by TIFF Kids participants for Canada’s 150th birthday.