The annual fall literary festival International Festival of Authors (IFOA) marks two special milestones: its own 35th anniversary and special events and forums commemorating the centenary of the beginning of World War I, that includes its first-ever academic conference “Representing World War I: Perspectives at the Centenary” hosted by Humber College’s School of Liberal Arts & Sciences (October 31- November 2) alongside the two-week fest running October 23 to November 2.

“A big birthday like 35 offers the chance to celebrate our storied past,” reflected festival director Geoffrey E. Taylor, “but also offers us the opportunity to look ahead. Plans are already underway for many [IFOAs] to come. We are constantly looking forward, finding ways to reinvent ourselves and always hunting for the next generation of writers – the fresh and exciting voices that you have come to expect we will introduce you to.”

IFOA 2014 starts off with a huge bang in landing Canadian auteur David Cronenberg’s first novel Consumed for the PEN Canada Benefit on its opening night October 23 with philosopher Mark Kingwell interviewing the venerated filmmaker who will also read and sign copies at the event to benefit the universal/artistic rights organization.

Among the other 150 authors from 20 nations converging to the fest’s 100 events are fellow Canadian writers Roch Carrier, Ann-Marie MacDonald, Dionne Brand, Wayson Choy and Miriam Toews; internationally-acclaimed authors Roxane Gay, Jacek Dehnel, Karl Ove Knausgård, Fuminora Nakamura, Colm Tóibín, James Ellroy and many more engaged in readings and discussions on the written word and the many challenges it faces in maintaining an audience in the digital era.

Yearly IFOA programme Found in Translation on increasing Canadian attention to global novelists participating in roundtable panels “Globalization + Literature: Breaking Down Barriers,” “Core of Meaning” and “Translate Yourself!” (all October 25) and “Around the World in 60 Minutes” (October 26); two guest nations get personal spotlights with China@IFOA (October 26) and Myanmar@IFOA (November 2); the Koffler Centre of the Arts return October 26 with “Dualities: Tales of Two” featuring Shelly Oria and Alison Pick discussing their latest offerings based on the navigation of multiple cultures and faiths and publishing houses ECW Press (October 24) and Penguin Books Canada (October 28) celebrate their own anniversaries in the business.

Recently announced, IFOA’s Harboufront Festival Prize will go to University of Toronto history professor Margaret MacMillan that will be awarded to her on October 24 before the Marilynne Robinson/Colm Tóibín interview at Fleck Dance Theatre, which the author of The Uses and Abuses of History and 2013’s The War That Ended Peace: The Road to 1914, stated on her win: “This is the most wonderful and unexpected news. I cannot believe that I am in the company of such giants of Canadian letters, including Alice Munro, Margaret Atwood and all of the outstanding writers who have won this Prize in the past. I am so delighted and grateful.”

Also on the agenda is the kid-lit programme YoungIFOA has Robin Stevenson and Renné Benoit and Rebecca Upjohn (both October 23) and Susin Nielson (October 24); a special tribute to the late, beloved storyteller Alistair Macleod on November 2 and IFOA Ontario making the rounds around the province with stops at Woodstock (October 22), Hamilton (October 23), Creemore (October 24), Burlington (October 28), Midland (October 29), Kitchener and Brantford (both October 30) and Thunder Bay and Parry Sound (November 6). 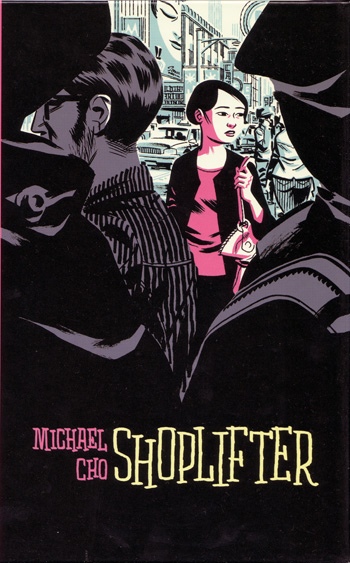 Idealism can burn so bright in one’s path that it often blinds to the reality that, sooner or later, sinks to the point where purpose gets questioned and disillusionment encamps the mind. In South Korean-born, Toronto-based cartoonist/illustrator Michael Cho’s debut graphic novel Shoplifter, it follows one particular soul trying to figure the meaning of life in a light, melodramatic fashion.

Twenty-something copywriter Corinna Park has been working at a big city ad agency since graduating from college with an English degree, hoping to have written a novel a becoming a successful author. But lately she hasn’t been feeling inspired in her workplace and, as a bit of a personal kick; tends to do some minor shoplifting of magazines at a local convenience store near her condo to compensate her doldrums and non-existent social life.

After a meltdown during a pitch meeting over a tween fragrance promotion, Corinna is given the weekend by her boss Rodney; an understanding type who senses her dissatisfaction; to re-evaluate on her being at the agency and gets a moment of clarity of sorts through her popular receptionist friend Candi at a downtown club launching and a possibility with a handsome young photographer also looking to do something different with his life.

Cho’s inking, styling and singular toning is just as pleasing to the eye as does the story being economical and candid could easily pass for a real-life situation in this compact graphic novel grounded in that sense where one must learn to overcome personal doubts as to whether to rekindle your passions, to take that jump into the unknown as the characters created with sympathetic thought and personalities face.

Shoplifter is a concrete start for Cho with this kind of storytelling on a young urbanite seeking to find her own voice and self-fulfilment which doesn’t degrade into a patronizing manner that even the mobile Millennial of today doesn’t have all the answers to life, either. 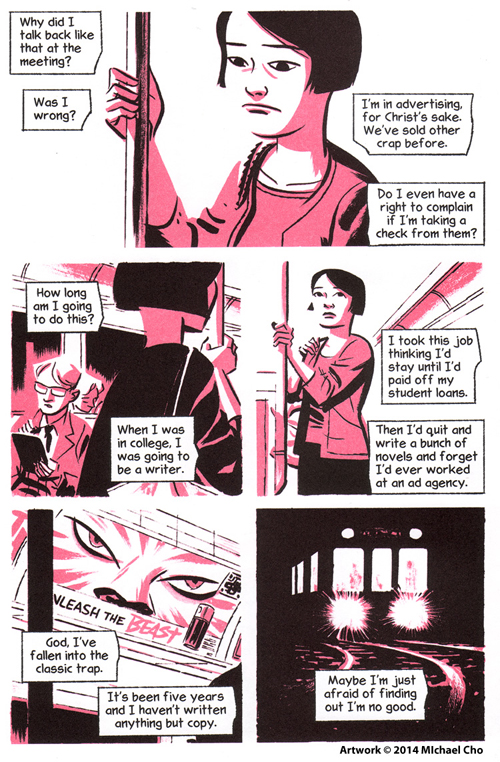 Repackaging the King of Pop's Legacy 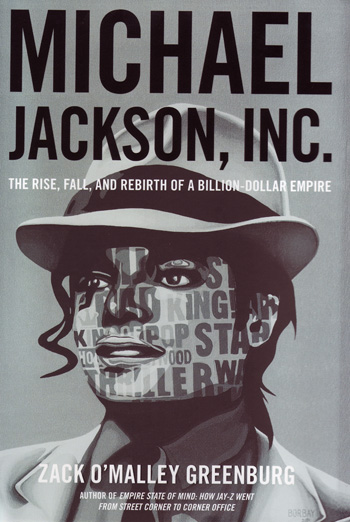 Michael Jackson, Inc.: The Rise, Fall and Rebirth of a Billion-Dollar Empire

With an incredible talent and exuberant personality, Michael Jackson indeed was one of the most electrifying – if complicated – entertainers in living memory. Many still remember him as a singer, songwriter, dancer and philanthropist, but few know how astute a businessman he was as Michael Jackson, Inc.: The Rise, Fall and Rebirth of a Billion-Dollar Empire respectfully and keenly pours over on the massive fortune he accumulated in his life and in death, five years after his untimely passing, with such vigour by Forbes senior editor Zack O’Malley Greenburg writes in minute detail.

There may be something ironic in having an editor who writes for a business publication who tracks celebrity wealth, dead and alive, but at least the writer knows something a little about fame: Greenburg’s first and only film role came as the titular figure in the acclaimed 1992 drama Lorenzo’s Oil. But as quickly as he experienced it, he quietly and unregrettably left it behind to have a normal childhood, the one Jackson lamented over the loss of his since becoming a superstar at age 8 with the Jackson Five.

But, Greenburg writes, Jackson never wasted a moment, given his intellect, curiosity and perfectionism drove his ambitions to being the best during his solo career having had experienced the hard life in his steel mill birthplace of Gary, Indiana and being on the chitlin circuit with his brothers in the group’s early years by learning from others, including idol James Brown who separated “show” and “business” from show business.

After making those leaps from his first two solo albums Off the Wall and the monumental Thriller that sent him into the stratosphere in the 1980s with the help of attorney John Branca and music label mogul David Geffen, who now co-manages his estate; he placed his first cornerstone of his financial kingdom with the acquisition of the ATV music catalogue (later ATV/Sony), which included many of the Beatles’ hits, for $47 million in 1985. A princely sum back then, which has now grown into a $1 billion investment.

As the book shows, Jackson expanded his empire into other ventures from endorsements deals with Pepsi and LA Gear, sold-out world tours, his bestselling autobiography Moonwalk, music video sales, videogame soundtracks and more, that his fortune would amass to $125 million at its zenith in 1988. But he also was a victim of his own success, from planting outrageous rumours in the tabloids to stay in the public eye (remember the one about wanting to buy John “The Elephant Man” Merrick’s bones?) until the media starting creating them by themselves.

Then came those who entered and left his business juggernaut to either carve a slice from his wealth by either taking advantage of his generosity to the false child molestation charges that followed him to his final days, which permanently crushed his promising acting career. Plus, Michael Jackson, Inc. looks at the deals that never made it, like the hope of launching an entertainment consortium with a Bahraini prince that envisioned theme parks and a record label and the time Jackson came close to buying Marvel Comics, which was on the verge of bankruptcy long before their superhero film franchises brought them back from the brink and became a Disney purchase for $4 billion in 2009 (just image the money he and his estate would make now).

Greenburg does a pretty tasteful job in avoiding the gutter-press quagmire and makes the book into a celebratory one on Jackson and his business savvy though interviews and research, that has now paved the way for other music superstars since from Jay-Z to Justin Beiber to have their own empires from branding their own fashion lines to fragrances. And it also looks at the aftermath that, in an oddly bizarre twist of fate, resurrected and redeemed Jackson’s music and legacy which has reaped in the benefits to a staggering $700 million from two tributary Cirque du Soleil shows – the touring IMMORTAL World Tour, which recently finished its four-year run on the road and grossing $360 million in total and 2013’s ongoing Las Vegas residency ONE – to the unprecedented $250 million record deal his label Sony signed to release ten posthumous albums of unreleased material until 2017 (and possibly beyond), including the commercially-and critically-lauded Xscape that came out this past summer.

Whether he realized it or not, Jackson pulled off the greatest comeback of comebacks that Michael Jackson, Inc. astonishingly examines and serves as the blueprint for all future celebrity business deals for all its benefits as much as its drawbacks on the deeper costs it pays in the name of creativity. Highly recommended.