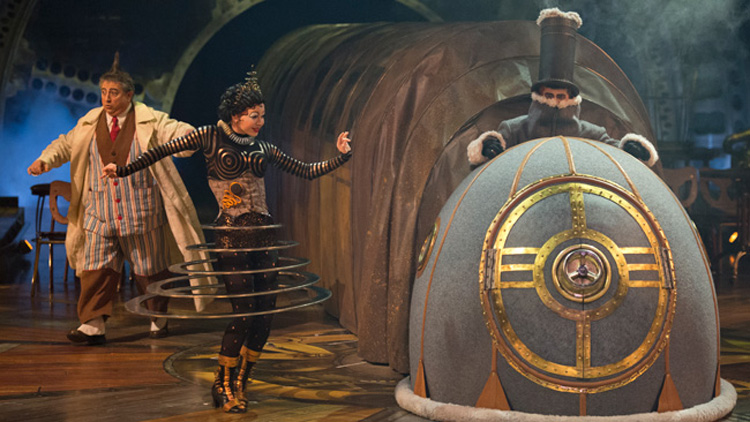 The Cirque’s back in town with their 35th show, KURIOS – Cabinet of Curiosities, where their promo tag is “seeing is disbelieving.” And for longtime fans it will make them do so with utter amazement and delight, still proving that the Montréal-based mega-circus still has it 30 years later in its exploration of what the human imagination can achieve.

In the 19th-century laboratory of the playful, half-mad scientist The Seeker (Antonio Moreno), he creates a time machine that will hopefully unlock a new dimension for discoveries that instead unleashes inhabitants from Curiosistan with three characters, the portly Mr. Microcosmos (Karl L’Ecuyer), elongated mechanic Nico the Accordion Man (Nicolas Baixas) and Klara the Telegraph of the Invisible (Ekaterina Pirogovskaya); leading a cavalcade of their fellow beings to engage and enlighten with the eccentric inventor to find his own discoveries.

The opening Chaos Synchro 1900 gets things going through its highly rhythmic percussion/dance/juggling barrage, headed by the Juggler (Gabriel Beaudoin) and Bella Donna (Christa Mercey) along to the electro-swing score by Raphaël Beau and Bob & Bill totally electrifies to the moves of Sidi Larbi Cheraoui and Yaman Okur’s choreography. While the basic acts of contortionists aboard a mechanical hand and Roman and Olena Terenshchenko do alright, there are more inventive acts abound like the Aerial Bicycle feats of Anne Weissbecker and the funniest clown act Cirque’s put on in ages: an “invisible” circus run by David-Alexandre Despres and his Act Two skit.

Mind-boggling doesn’t come close to describe a parallel universe hand-balancing chair stunt or a swinging (literally) Rola Bola act as played by James Eulises Gonzalez Correa; the modest tomfoolery of Microcosmos’ inner being Mini Lili (Antanina Satsura) and the show’s whimsical moment of Baixas’ shadow puppetry among writer/director Michel Laprise’s fast and tight direction unlike past Cirque productions that makes all the difference, harnessing the early days of the company’s first shows, with it bouncing off its own energy and infecting the audience the same way.

Although it kind of limps around the Yo-yo act that says very little (even when it tries to pick itself up towards its end), KURIOS is a wonderment through visionary veteran Cirque collaborator Stéphane Roy’s steampunk-inspired sets and props, Philippe Guillotel’s period costuming and Martin Labrecque’s lighting keeps this world very much alive for one of their most vibrant productions in quite a while.

The Toronto engagement of KURIOS – Cabinet of Curiosities runs through October 26. For tickets/info: call 1-800-450-1480 or cirquedusoleil.com.

Right after its Toronto opening night of August 28 for KURIOS – Cabinet of Curiosities, Cirque du Soleil threw a post-show reception in the Grand Chapiteau, generously supplied by local catering companies. Here are a few photos from that evening including some oddball characters running about!

(But hey, enough about the audience…)

Group Exhibit: Seeing Each Other and Ourselves

As curated and presented by the Ukrainian Jewish Encounter of two differing artisans, Seeing Each Other and Ourselves looks at the ongoing crisis earning the world’s spotlight betwixt Ukraine and Russia and of a legendary Canadian painter’s legacy took up a brief residency at Harbourfront Centre’s Marilyn Brewer Community Gallery space during the biennial new Jewish culture Ashkenaz Festival (August 29-September 1) of struggle and identity in both cases.

Witnessing the current Maidan Revolution that shoved out a unpopular pro-Russian leader and fuelled the Cold War fantasies of its benefactor president in Moscow, Eyes of Maidan gets seen through the lens of Israeli-Ukrainian photojournalist Alexander “Sasha” Sherbakov in its early days, showing the range of how far reaching a cause for democratic choice to be re-won 20-plus years after the collapse of the Soviet empire from its street battles at the Maidan (Independence Square) in Kyiv and of its participatory citizenry, young and old, Jewish and gentile and left and right, including Ukrainian afghansti (Soviet-Afghan War) veterans; willing to lay down limb and life in separate portraits, be it of themselves either barefaced or balaclava-covered.

Vignettes of Jewish Life in Canada by William Kurelek (1927-77) comes from the book published in 1976 stand very reflective of his own experiences of a Ukrainian descent childhood in the prairies and how Jews contributed to the Canadian mosaic with detailed and colourful artwork from a failed farming settlement in 1920s Manitoba, a pre-World War I Vancouver general store to average contemporary Jewish life of the period are expressive and well-thought out.

Both these exhibits show of change and challenge that is part of humanity and of learning to fit within a society that gives Seeing Each Other and Ourselves it most poignant stance.

Made in 2012 as part of the popular BBC-TV Timeshift documentary series, Klezmer: Now That’s What I Call East European Wedding Music…As Played By Yiddish Speaking People traces the roots of the music’s rise, decline and resurrection at the well-attended screening August 31, showing the drawing power as part of the musical collective in a interesting format that informed as well as entertained under a hour.

Director Merryn Threadgold assembles archival, music videos and talking-head clips from the shtetls of Eastern Europe to the modern-day stages of the world and recorded music – all within a four-month period – maintains a good enough pacing and off-humorous moments on the genre’s background and influences as wedding music of the klezmorim (Jewish troubadours) that almost vanished in the post-World War II era until its revival in the mid-1970s by Jewish American musicians rediscovering their identities, plus its new hybrids it finds itself now. Edited cleanly, the doc crams a lot of its rich heritage of joy and sorrow (even a brief mention of Toronto’s own Lemon Bucket Orkestra) about life that the music still has a future.

The Sarajevo Haggadah: Music of the Book

Based on the Geraldine Brooks’ historical fiction novel People of the Book that occupied renown Bosnian concert accordionist/composer Marima Ključo’s mind for about five years, The Sarajevo Haggadah: Music of the Book has its own musical component about the 400-year old Hebrew manuscript, now housed in the National Museum in Sarajevo; that survived wars and border-crossings made its Torontonian stop on a acclaimed tour hinged on the classical and avant-garde at Harbourfront Centre Theatre.

Spinning a surreal yet familiar sojourn for 55 minutes, Ključo with her accompanying pianist Seth Knopp regaled the history of the parchment from its origins in Moorish Spain in the 14th century until the 1492 exodus of Sephardic Jews by King Ferdinand’s decree (revoked in 1968) to wind up in the Bosnian capital, itself a cosmopolitan city of Jews, Muslims and Christians living in peace as they did in Catalonia. Broken down in 12 movements from its creation up until the Yugoslav Wars of the 1990s, dramatic piano resonates and accordion strains all hang in the air with its emotional whispers and subtle impacts, with a little hint of klezmer thrown in for measure.

Enhanced by the digital animation sequences of video artist Bart Woodstrup uses illustrations from the Haggadah and the country’s darkest chapters regarding World War II and the Balkans civil war, Ključo does attempt to explain the survival abilities, its cultural importance and the symbolism it carries around about tolerance and identity of oneself in universality.

Now here’s a mash-up you don’t see often: Eastern European klezmer meets Nigerian Afrobeat as done by the ten-piece New York-based Zion80 for their solid Toronto debut to the crowd at WestJet Stage on a already balmy late summer’s night as the hot horns section belched out enough funk to put the other disciples of the music’s founder, Fela Kuti, on high alert.

As lead by guitarist Jon Madof, they added some bluesy R&B, Ethiopian-rooted reggae and Led Zeppelinesque Arabian hard rock on their 90-minute set jammed away to the percussions by Marlon Sobol and Brian Marsella’s swirling keyboards to their explosive crescendos and pulses, even getting a little trippy amidst the music that you’d be able to hear a touch of klezmer if you listen carefully. While the audience did applause enthusiastically to each song performed, Zion80 could have used a much more receptive crowd to play to. Perhaps the next time they’re in town they’ll get that chance and not be treated like some faddish thing like Matisyahu (remember him?) was a few years back.