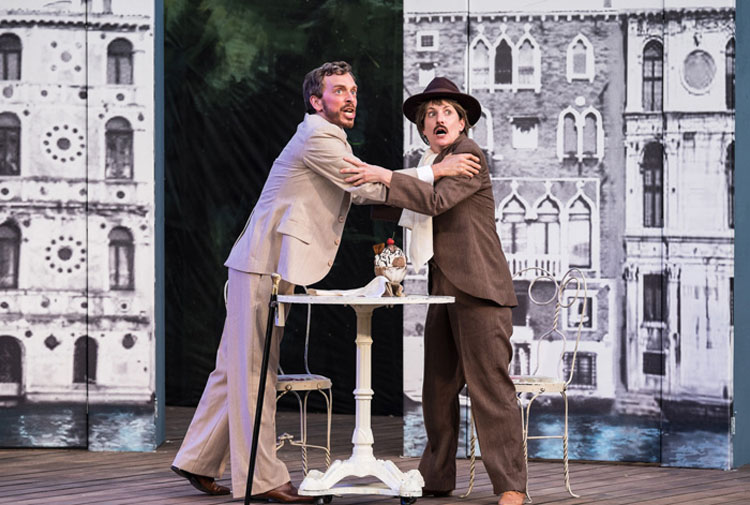 The Comedy of Errors (Canadian Stage)

After dining on the incoherent ashes they took with Julius Caesar, Canadian Stage’s double-bill washes it down with the pleasurable The Comedy of Errors at their annual Shakespeare in High Park series, taking on the classic mistaken-identity comedy with a highly spirited and rollicking manner.

Before Solinus, the Duke of Ephesus (Michael McManus), Syracuse merchant Egeon (Allan Louis) pleads for his life for illegally entering the city as he tells his reasons for coming in search of his long-lost twin sons and twin servants, whom he lost at sea as infants along with his wife years ago, albeit one son and servant Antipholus (Dylan Trowbridge) and Dromio (Naomi Wright); now adults who too have gone in search of them in the same town and can only be spared by paying a fine.

Meanwhile, Adriana (Allegra Fulton) is in despair thinking that her husband, the other twin brother also named Antipholus (Kyle Golemba), is being unfaithful as her sister Luciana (Dalal Badr) tries to comfort her insecurities. Through a series of mishaps unwittingly created by his servant, also called Dromio (Jessica Greenburg) and Dromio of Syracuse, a cavalcade of misunderstandings and confusions reign around town as Antipholus of Syracuse is confused by the generosity of the town, while Luciana is equally conflicted with the feelings coming from him as they try to save their father from being executed, provided they can save themselves from each other.

All staged on the simple stage design by Teresa Przybylski and Brad Trenaman’s lighting, it’s a fine interpretation using the backdrop of the halls and alleyways of 19th-century Venice to offer a contemporary linkup of sorts while grounded in the familiar wordplay and slapstick humour (one exception: first time I’ve seen flatulence jokes used in the Shakespearean universe) working well on its satire on social relationships in the pacing and direction helmed by Matjash Mrozewski with plenty of energy to spare.

Both Greenberg and Wright delightfully play their impish knaves roles to the hilt while the majority of the cast stick to being the straight (wo)men to all their antics very competently, including Christopher Allen doing a turn in drag as Lord Balthasar (as well as voice of reason) with Randi Helmers, McManus and Louis being the anchors despite their brief roles that help bring some sense of calm amongst the comedic chaos.

The Comedy of Errors redeems this other-half of Canadian Stage’s double-bill for the summer that is truly enjoyable, if you don’t mind physical humour running havoc on the stage doubled-up with pleasure.

Dishing out on a Filipino icon’s mythos 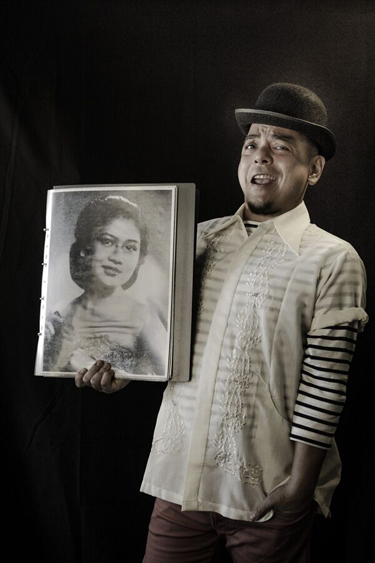 For his return engagement with his politico-biographic hit Livin’ La Vida Imelda, Carlos Celdran offered a lot on his one-man show over the life of Imelda Marcos, on the good, bad and ugly sides of the polarizing former First Lady of the Philippines, as a mishmash of things that usually what one wouldn’t call straightforward theatre, but at least it was consistent.

Opening with a very brief history of the Philippines both of its Spanish and American colonial impressions on the archipelago, Celdran starts on about her near-impoverished beginnings despite being the daughter of rich landowners and caught up in the class divisions that once were the norm of her time. Ambitious for a “provincial” type, he tells about her varied, if controversial career as a beauty queen, singer/model and finally, a politician’s wife under her late husband Ferdinand Marcos’ authoritarian rule through the 1960s to the mid-1980s, using the arts and culture to help uplift and modernize their society, even through manipulative and dubious means.

Smacking those realities from her grandiose architectural projects from the Philippine Cultural Center of the Philippines to the Manila Film Center by her favourite architect Froilan Hong and the near-decade period of martial law from 1972 to 1981, the 90-minute play is a grab bag of mixing truth and rumour Celdran uses for a double-edged sword is a bit complex in exposing the price of ambition, cult of personality and kleptocracy shaded by the benevolent faces that were the Marcoses to show humbleness and pride to their nation and the world while living a life of decadence and celebrity pursuits (plus her love for mayonnaise) amongst a society grappled with a impoverish populace.

Although the material is fast-paced, funny, shocking and interesting on the tidbits on Imelda’s life, Jodinand Aguillon’s set design is simplistic and symbolical (impossible to not smirk at the gold-lamé palm tree and pile of high heels) and the multimedia graphics work out okay, it’s often is hampered by the overpowering usage of Karyl Agana’s lighting being too bright during the uplifting scenes and the lively soundtrack is kicked up a few decibels so high that it almost drowns out Celdran’s monologue at certain points that gives this production a sophomoric quality (which could have been the fault of the OCAD venue at hand, possibly).

The only sobering moment comes from the photo montage of the 7,000 cases of human rights violations committed under Marcos’ watch before it goes back to its ambience and ending on a semi-bitter note on the country that still has to contend with over their legacies. Livin’ La Vida Imelda certainly does entertain and provoke a lot of emotions, although it could be improved on the overall sound/lighting values to make it look smoother for highly decent play.

When a land is gone, what is left is the residuals of heritages even if it must learn to adapt to a new situation and do the best to thrive further, which is what is behind Return Home from Vancouver’s Salish Sea Productions of two particular natures: the indigenous and the exiled on a land neither one is familiar with done through clarity and sobering afterthoughts.

It’s the story of Leila (Dima Alansari), a Palestinian transplant via the Middle East and Maria (Emile Monnet), a Québec Anishinaabe college student both living just enough for the city as they meet at a political rally and frequently, by chance or not; on the Vancouver public transit that at first find nothing in common, until through cultural links brings them slowly together, via a trickster-like middleman (Carlos Rivera); to find a healing balm to soothe their adjustments and hardships in order to continue onwards as a means of survival.

In the hour-long production, directors Majdi Bou Matar and Diane Roberts compresses both First Nations and Arabic cultures, as brilliantly co-created and performed by Alansari, Monnet and Rivera; into a potent cocktail of dance, political theatre and visuals evenly together in stating the obvious topics from Palestinian resistance to the disappearance of Canada’s Native women is pretty much an in-your-face approach. But personal narratives keep afloat these ideas instead of bogging them down, under Melissa Joakim’s feasible lighting designs and Roberts’ structured dramaturgy.

Return Home celebrates the gender and identity struggles, losses and experiences of these camps as a triumph of the spirits trying hard to find connections as much as it does in coming to terms and peace with each others’ pasts.

Ripped right from the recent headlines of industrial accidents and ecological deterioration, Lac/Athabasca by playwright/director Len Falkenstein ties them into a cross-country horror story on the fragility of human and environmental conditions of the past and present by the New Brunswick Theatre Free Radical ensemble that should make you lose sleep at night on how safe are we from ourselves from potential disaster.

Inspired by the 2013 Lac Mégantic tragedy and the ongoing controversy of the Alberta oilsands projects, several characters come into play: two biologists (Alex Donovan, Rebekah Chassé) clash over pollution levels around the oilsands tailings over company policy versus public safety; a simple-minded journeyman (Jean-Michel Cliche) and a barroom stripper (Emily Bossé) finding each other in the New Brunswickan town of Lac Madawaska prior to an impending disaster that will change their lives and a flashback to the wilderness interior of 19th-century Canada of a British fur trader (also Donavan), his Métis guide (Jake Martin) and a First Nations woman (also Bossé) possibly facing a supernatural beast waiting to strike from the shadows.

Falkenstein spins a cautionary yarn with a little dark humour and a “monster” story all too familiar with this subject for a eco-play with some efficiency, but could have toned down some of the facts-dropping material from the script and make it more layperson-friendly for the uninitiated, although it works out alright.

The cast is divine in all their multiple roles taking on different façades to their characters, in particular to Chassé’s Janice willing to walk with blinders on for the company as it eats away at her psyche; Martin doing a jovial portrait of a glacier tour guide trying to keep a straight face; a chatty Thierry trying to find comfort with Bossé’s Ashley, both having to work in dead-end jobs to make something of their lonely lives to Donovan showing shades of colonial satire of a expansionist suddenly caught out of his element without assessing the cost of hunting something close to extinction to facing his own mortality.

Running around ninety minutes, Lac/Athabasca dives into the debates of economics and environmental benefits, corporate arrogance and human behaviour done up in a edutainment format living up to its warning mandate despite all the constant railway derailments and contaminant spillage that continue to go on to make you wonder if we have we really learned anything at since Lac Mégantic.