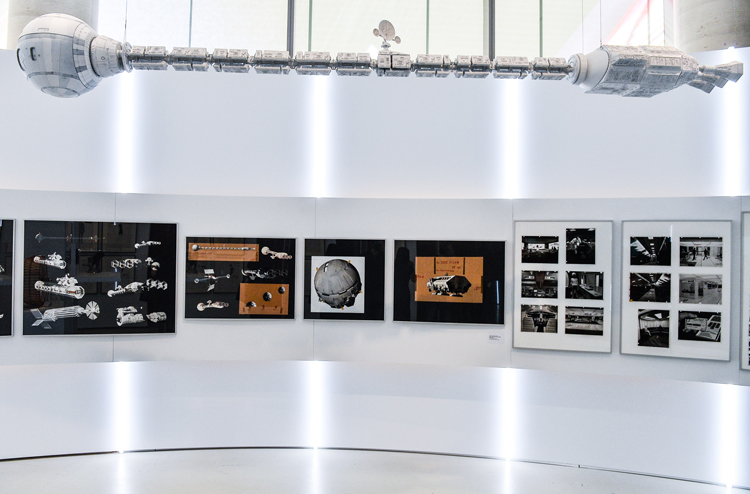 Inside the White Room inspired by Stanley Kubrick’s 2001: A Space Odyssey housing props, models, costumes and stills from the film in TIFF Lightbox’s HSBC Gallery of the Stanley Kubrick touring exhibition.

The acclaimed Stanley Kubrick touring exhibition is as expansive as they say about the legendary filmmaker (1928-99) and the collection displayed at TIFF Lightbox’s HSBC and Canadian Film Galleries for its Canadian debut stopover sheds a new light into the intricacies of his craft, yet hinders it at the same time for its slight limitations (which could also be said for his short filmography since he approached it like a true artisan).

Meeting you at the lower HSBC Gallery are two filmmaking achievements, the 1968 Academy Award for Best Special Effects for 2001: A Space Odyssey – regrettably, the only one he ever received in his lifetime – and the Venice Film Festival 1997 Career Golden Lion Award for lifetime achievement and his philosophy on his technique to his favourite game, chess: “What chess teaches you is that you must sit there calmly and think about whether it’s really a good idea and whether there are other, better ideas” emphasized by his personal chessboard on display.

Video montage clips from Kubrick’s earlier works from documentaries and dramas from 1950 to 1956 and stills from Killer’s Kiss and The Killing shows he was an independent filmmaker ahead of his time and before the team was even coined that led to his first big budget projects Paths of Glory, focusing on his long-life attention to detail and Spartacus, where illustrator Saul Bass’ storyboard sketches are a must-see for their linear, ink and wash method.

Several production notes, scripts, letters and budget sheets are perfectly preserved, including novelist Vladimir Nabokov’s letter of rewrites he made to the script adaptation of Lolita and letters of protest from the Roman Catholic Church’s Legion of Decency chairman begging the director not to make the once controversial film (and Kubrick’s polite but firm rebuttal letter), plus a letter from Sue Rudman née Lyon, who played the titular role, to him about her then-happily married life away from showbiz dated October 1994 with a photo is heart rendering.

A 1:20 scale reproduction of Dr. Strangelove’s War Room by Workshop Jörg Kallmeyer is mini-eyeful, a rare shot of Kubrick unguarded as he paints “Hi there!” on the nuclear warhead Slim Pickens would immortally ride into a phallic Armageddon, a rather amusing letter from a Mrs. F.J. Dobbs slamming the satirical nature of the film, never-before seen stills of the War Room food fight scene cut-out from the theatrical release and one sobering curios: an advanced screening pass of the film postponed due to the printed date November 22, 1963 – the day U.S. President John F. Kennedy was assassinated.

The exhibit’s highlight section is, of course, the science-fiction classic 2001, where one whole room bathed in white is dedicated to the Discovery spacecraft featuring said model piece that would inspire generations of special effects model makers, the original HAL9000 “fish eye" lens, a short doc on the making of the ship’s centrifuge by Kubrick’s former employer Look Magazine (more on that later), a United States Air Force questionnaire filled out by Kubrick and his wife Christiane on actually seeing a UFO back in 1966 and the test film frames of the special-effects centrepiece Stargate sequence. Outside the room, the ominous monolith is still commanding in real life as well as the Star Child puppet prop and prehistoric men costumes, although the spacesuit and backpack look a little worse for wear due to its material composite and age.

Reproductions of the Kovora Milk Bar dolls mingle among Phillip Castle’s airbrushed psychedelic ‘60s hangover poster designs for A Clockwork Orange, Barry Lyndon’s period costuming, the actual Adler typewriter and axes used on The Shining, Sergeant Joker’s “Born to Kill” helmet and photos from Saigon and Huế City signage shots from Full Metal Jacket have aged well to the masquerade orgy masks used in Eyes Wide Shut (the Picasso neo-cubist one’s a treat) are all interesting, but they prove to be Kubrick’s biggest shortcomings of his latter works with way too little to show for it (he never was much on keeping particular props that he deemed unimportant).

This would be a downer were it not for the continuation at the Canadian Film Gallery to see the variety of camera lenses he used, including his favourite Arriflex 35IIC handheld 35 mm camera and early photos from his photographer days at Look Magazine from 1949 to 1952 on how his aesthetic for light and shadows would later affect his film work and dozens of film posters from around the world based on his films. 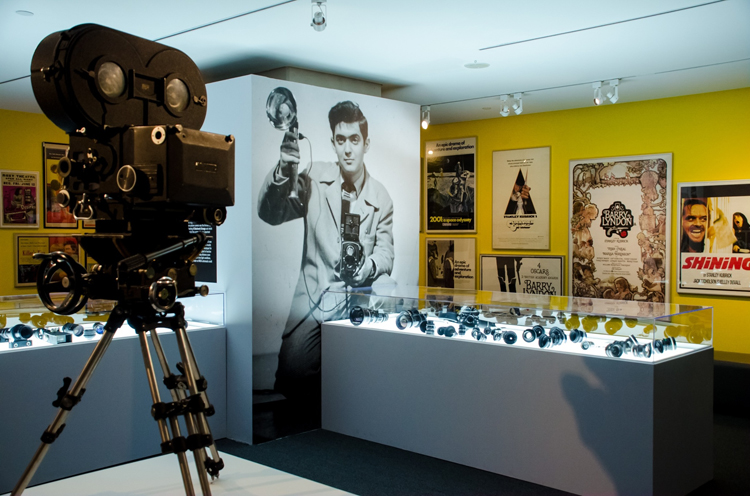 Stanley Kubrick touring exhibition continues in TIFF Lightbox’s Canadian Film Gallery with the various cameras and lenses the filmmaker used, including film posters and unrealized film projects he had worked on for decades.

The section dedicated to his unrealized pet projects like the storyboards for A.I. Artificial Intelligence (later taken on by director friend Steven Spielberg after Kubrick’s death) made by Christopher Baker of his futuristic pen and ink renderings and influences the auteur was working on between 1994 to 1996; a Holocaust drama Aryan Papers with model Johanna ter Steege in a period costume photo shoot specs, preliminary shots around Poland and vintage Warsaw Ghetto photos held some promise and the biopic on Napoleon that was a lifetime obsession for him consists of the many books, notes and David Walker’s costume sketches – even a polite refusal letter from Audrey Hepburn turning down the role for Josephine – show how grandiose his vision was in doing a cradle-to-grave story (although word has it Spielberg’s producing a TV miniseries version based on Kubrick’s notes and to be directed by Baz Luhrmann).

To give it a more personal and loving touch, widow Christiane’s watercolours of Kubrick over the years have a light and airy flow from the intensive colours of orange, purple and blue hues of “Travelling to the U.K.” to the simple honesty behind “Living Room at Childwickbury,” their home of 30-odd years and the director’s resting place. Could have expected a little more from the latter works sections, but Kubrick does have plenty to see and take away from afterwards on the mastery behind his films for his fans and students of the seventh art.

A Brief History of Seven Killings

A couple of years before his death, an interviewer once asked reggae legend Bob Marley about the night of December 3, 1976 when a group of armed men stormed his home and made an attempt on his life, wife Rita and his manager on who was responsible for it, he made vague comments on the matter but for whatever reasons offered very little. Neither of the would-be assassins were ever found or charged, adding a layer of mystique to Marley and the speculations that persist to this day.

Award-winning novelist Marlon James, who himself lived through that period in his boyhood days in Jamaica, brings a fictionalized account in the riveting crime story A Brief History of Seven Killings in a taut and decades-spanning page turner based on the rumours and urban legends he grew up hearing about gangland violence, Caribbean culture and geopolitical intrigue amidst a steamy backdrop to the certain possibilities surround those events.

1970s Jamaica was like the wild, wild West Indies, the capital Kingston being Dodge City and slums like Trenchtown were the O.K. Corrals where political parties were jockeying for position between the People’s National Party (PNP) and the Jamaican Labour Party (JLP) factions basically shooting each other on a near-daily basis and reggae was emerging on the world stage as a musical force to be reckoned with.

Several characters get entangled somehow on the eve of the historical One Love Concert headlined by Marley – only referred here as The Singer – that include rival crime bosses Papa-Lo and Shotta Sherriff and their respective second-in-commanders Josey Wales and Weeper who may (or may not) be involved, perpetually-jaded Rolling Stone journalist Alex Pierce covering the event and one Nina Burgess, an ambitious one-night stand of The Singer looking for a way out of the country, if only to escape from her stifling middle-class life and its social ills.

Fuelling the tensions on the island are Cold War adversaries and Medellín drug cartels versus CIA operatives not keen on letting the socialist PNP take power and possibly turn Jamaica into another Communist satellite state that certain people get caught up in, on purpose or by accident; on that fateful December night that ends up failing to kill The Singer and sending some on the run over a three-decade period from the seedy crack houses of New York to the neon-dazzling nightclubs of Miami of the 1980s and ‘90s, as gangsters dabble in the hurly-burly drug trade and try to escape the first rule of assassination: kill the assassins and any incriminating witnesses.

James, praised for past works The Book of Night Women and John Crow’s Devil, serves up his spellbinding epic of fugitives, ghosts, puppet masters, king makers and investigators looking to find out who did what to whom and how far they will go to cover their tracks wither for personal or financial gain or simply out for payback with Caribbean patois and straight-laced English blended in. At times the language get very salty and a trite misogynistic and homophobic in tone, it actually heightens the nature of the times and story with full force (but I’m curious to wonder why the author uses words like “chillax” and “gaydar,” terms that certainly weren’t in use in the 1970s and ‘80s).

A Brief History of Seven Killings gets down and “dutty” for one of this year’s best crime stories and socio-political thrillers with a gritty tropical setting swirling behind one of pop culture’s biggest musical icons that will keep one guessing and re-guessing to its climax.