The Force is alive again – and Awakened

Screenplay: J.J. Abrams, Michael Arndt and Lawrence Kasdan; based on the characters created by George Lucas

To fully clarify, director/co-producer/co-writer J.J. Abrams’ opening chapter in the latest Star Wars saga of Episode VII, The Force Awakens, absolutely is not a reboot of George Lucas’ space opera by any means, but of a continuation of the two trilogies by bridging both the old and the new. And by golly, this marriage works on all levels on the thrills, drama and laughs that made the science-fiction/fantasy such a beloved part of the universal pop-culture realm.

Thirty years have past since the Battle of Endor in Return of the Jedi brought an end of the Sith’s tyrannical rule and a New Galactic Republic was established, yet it still stands on shaky ground. The First Order, arisen from the ashes of Emperor Palpatine’s Galactic Empire and under the command of the mysterious Supreme Leader Snoke (Andy Serkis); continues to fight against the Republic’s only viable army left over from the Rebel Alliance days now known as the Resistance, led by General Leia Organa (Fisher).

Sent on a vital mission to find her long-disappeared twin brother and Jedi Master Luke Skywalker (Hamill), her most trusted pilot Poe Dameron (Oscar Isaac) meets with an Old Republic ally Lor San Tekka (Max von Sydow) hiding on the desert world Jakku who has the key in finding Luke. He is soon captured by Kylo Ren (Adam Driver), the merciless and all-powerful masked Sith Lord, but slips the data to his astrotech droid BB-8 beforehand who then flees into the sandy wastelands.

Found by a fearless scavenger named Rey (Ridley) who ekes out a hardscrabble daily routine since she was abandoned by her family as a child years ago and still waiting for their return, she also by chance comes across the defecting First Order stormtrooper Finn (John Boyega) who has freed and escaped with Poe and looking for a new start, that both of them find themselves kindred spirits somehow connected to…something.

Running into the aged Han Solo (Ford) and Chewbacca (Peter Mayhew) en route in finding the Resistance on D’Qar, with the First Order’s deadly planetoid Starkiller Base– that makes the previous Death Stars look like toy water pistols – not far behind, these new heroes have far to search for a new purpose and bigger destiny that beckons them.

Abrams, with his writing team with Michael Arndt and The Empire Strikes Back/Jedi scribe Lawrence Kasdan, has miraculously built a better Star Wars than Lucas did, when he tried his valiant best with the slightly-maligned, although relatively good prequel trilogy over a decade ago. By less over-reliance on the CGI that made Episodes I to III too pristine for its own good and relying mostly on some of the grit and roots from Episodes IV to VI, he goes for that feel in the direction with a sense of darkness and light, emotion and look old fans will joyously find again and new fans will welcome instantaneously with a little echo from A New Hope.

The old gang of Hamill, Ford, Fisher, Mayhew, Anthony Daniels and Kenny Baker – as the lovable droid duo C-3P0 and R2-D2, respectfully – slip back into their famous roles like it was yesterday and do well with their younger crew that don’t feel like fifth-wheel characters. One can read the passage of time felt between Han and Leia, both with histories shared that only Ford and Fisher could flesh out without too much sentimentality and they’re both great again as the once-cynical but sassy smuggler and the ever-steely yet majestic commander still holding grace under fire.

As for the newcomers to the space opera, Ridley and Boyega have fine chemistry that make them credible heroes ready to take the torch and legacy that now befalls them to carry for the rest of the new trilogy with confidence and Driver is a most worthy and dangerous, if conflicted villain with serious anger-management issues and a Darth Vader obsession to contend with. Additional cast members Lupita Nyong’o as the 1,000-year old Takodana alien barkeep Maz Kanata isn’t too bad here in a mo-cap performance as the Yoda-like figure, only minus the Force and with more humour, while Gwendoline Christie plays the armour-clad Captain Phasma and Domhnall Gleeson’s Heinrich Himmler-esque General Hux (he is most chilling in a Triumph of the Will-inspired shot) putting on turns as spit-and-polish foot soldiers for the First Order.

Oh yes, last but not least, BB-8’s a real cute, brave and resourceful robot on par with his older model counterparts that would make the late Ralph McQuarrie, the original Star Wars designer genius behind Threepio and Artoo, most proud.

Prepare to let yourself get completely lost in the two-and-a-half hour familiar smorgasbord of aerial dogfights and escapes, lightsabre duels, alien creatures and the magical mysticism swirling around John Williams’ thematic score – and producing the biggest gasp in the history of the series since Empire – as The Force Awakens becomes the best Star Wars film to come out in the longest time that the fans have been waiting for and the wait (and sitting time) is well worth it. 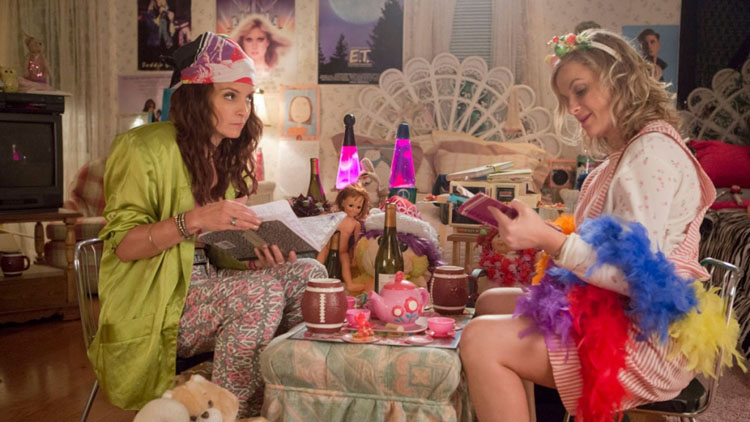 Saturday Night Live alumni and bosom buddies Tina Fey and Amy Poehler team up finally in their dysfunctional sorority comedy Sisters, as written by SNL and 30 Rock writer Paula Pell that stands up head and shoulders against those other testosterone-driven raunchy comedies of late that would give all of them a hard run for the money with gut-busting galore.

Living a rather mundane existence since her divorce two years ago, Atlanta nurse Maura Ellis (Poehler) looks for almost anything to get something that resembles a groove back in her life, provided she had one before. When her elderly parents Bucky and Deana (James Brolin, Dianne Wiest) decide to sell their home in Orlando and settle into a retirement community condo, they ask her and her elder sister Kate (Fey) to come clear out their room before it gets sold to some yuppie couple (Santino Fontana, Britt Lower) looking to move in shortly.

Neither one are entirely pleased that their childhood home is up for sale, especially Kate who is a somewhat irresponsible single mother to teen daughter Haley (Madison Davenport) that just got bounced from another beautician job and trying to prove she can bring some stability in their lives. Managing to convince Maura to throw a teen-style soiree as a farewell to their abode, they invite all their high school classmates, including semi-bad boy Dave (John Leguizamo), the lame class clown Alex (Bobby Moynihan) and that hunky renovator that’s just moved in down the street James (Barinholtz) that Maura has feasted her eyes on.

Added with the arrival of Korean pedicurist (Greta Lee) and her friends, a muscle-bound, tattooed drug peddler (John Cena) pal of Dave’s and a lesbian DJ party crew, these two middle-aged ladies manage to go from achingly mellow to pulling off the wildest house party to end all wild house parties to recapture lost youth by all their guests that gradually grows out of control, with a little vengeful help from the snotty class rival Brinda (Rudolph) that got shut out of their festivities.

Sisters is your tailor-made vehicle for Fey and Poehler’s brand of comedy following the basic sorority-house/teenploitation formula they adapt and even ad-lib around in Pell’s agreeable script, as directed by Jason Moore delivers along with the comic team most suitably to keep it from exhausting itself and some crazy-ass physical humour that until now, was simply male-dominated territory and credit goes out to that Fey/Poehler/Pell troika for knocking it right on its end.

Poehler and Barinholtz make pretty good at being a couple awkwardly looking to come together and the pratfalls that come with it in their hilarious moments; Fey as the live-out-loud Kate trying to reconnect to a weary daughter holds some merit, in particular when she’s the reluctant designated party mom forced to stay sober. Brolin and Wiest are truly funny as the parents, Rachel Dratch as the depressive Kelly about aging raises a few chuckles, plus Moynihan and Cera gets to take some of the thunder away from the leads out of their own scenes.

Certainly would look forward to seeing a Poehler and Fey team-up again on the screen in future endeavours as they seem to really know how to milk enough laughs and caustic material from themselves and each other with an end-credits blooper reel to match. And you can’t get any cooler when these two do a dance-off together to Snow’s “Informer.”