Many Tales of winter

Gathering up in the hunker-downing where we’d like to be during the winter months, is a huge abundance of goings-on from classics by Ibsen, Chekhov and Frank Zappa to some new works from the Royal Winnipeg Ballet, Alan Kliffer and on-the-spot sketch comedy that will be in the offering in Toronto for this time of year.

For the dance, there’s Harbourfront Centre’s NextStep series continuing with the usual grab-bag omnibus Dance Ontario Association’s annual Dance Weekend (January 15-17) and Julia Sasso dances’ Sporting Life (March 3-5) on the ridiculousness, vulnerability, pain and potential about our violent natures and the need for redemption; plus the return of two powerhouse dance entourages at the Sony Centre (1 Front Street East), the Royal Winnipeg Ballet of its national tour of their critically-acclaimed and controversial Going Home Star – Truth and Reconciliation (February 5-6), a visual representation on the First Nations community finding closure and healing to a shameful chapter of Canadian history and the Alvin Ailey American Theater Dance (March 4-5) with new and old programmes to their repertoire.

Theatre plays a huge forefront for the season with the Soulpepper Theatre’s Dora-winning remount of Reginald Rose’s timeless courtroom drama 12 Angry Men (January 19-February 13), Albert Camus’ The Just (March 5-26) based on the true 1905 assassination of Russian Grand Duke Sergei Alexandrovich in pre-revolutionary Russia, the romantic-drama Blood Wedding (March 2-April 9) based on Federico Garcia Lorca’s Spanish-based blood feud play reset in rural Ontario and the returning backstage comedy Jitters (March 3-April 6); Shakespeare’s The Winter’s Tale (January 26-February 20) gets a shot by the debuting Groundling Theatre company at the Coal Mine Theatre (1454 Danforth Avenue); Berkeley Street Theatre (26 Berkeley Street) holds to court Anton Chekhov’s final masterpiece The Cherry Orchard (January 28-February 14) by The Chekhov Collective and Necessary Angel Theatre; the Canadian musical-comedy cult hit by Alan Kiffler, One Night Only: The Greatest Musical Never Made (January 27-February 14) will improvise all music and comedy as suggested by audience members for a totally unique theatrical experience on a nightly basis over its 18-date run at the Factory Theatre (125 Bathurst Street) and Art of Time Ensemble puts on a tribute to rock’s greatest nonconformist and iconoclast Frank Zappa and his songbook, in the aptly-titled Zappa (February 19-20) at Harbourfront Centre Theatre (231 Queen’s Quay West).

Harbourfront’s World Stage series starts out with the French duo Halory Goerger and Antoine Defoort’s Germinal (January 20-23) as adventurers playing god in remaking the universe from the beginning, the Israeli occupation of The West Bank as told by the Belgian-Palestinian dance company KVS, les ballets C de la B and A.M. Qattan Foundation’s Badke (February 17-20) and the performance-cum-opening season party The World Stage Mirror Ball (January 30) as DJ Mother Trouble Nuance spins the dance-floor hits around ten runway categories and a makeup station; while Tarragon Theatre (30 Bridgman Avenue) continues its 45th anniversary season with the fertility screw-up comedy-drama Within the Glass (January 6-February 12), Kat Sandler’s world premiere dark teen comedy-fantasy Mustard (February 2-March 13) about a teenager having to deal with an imaginary friend and her divorced, alcoholic mother and the Québécois drama You Will Remember Me (March 1-April 10) follows the final days of a Québec sovereigntist professor’s final days with his family coping with his dementia.

And for something a little more lighter in material, the Toronto Comedy Sketch Festival has their annual fête in returning CBC Radio One’s popular comedy programme This Is That with Peter Oldring and Pat Kelly, among the forty-odd sketch comedy troupes from across North America coming to town March 3 to 13 at their three venues The Theatre Centre (1115 Queen Street West), the Comedy Bar (945 Bloor Street West) and the Randolph Theatre (736 Bathurst Street) with free and ticketed performances.

Kiarostami gets behind his Doors 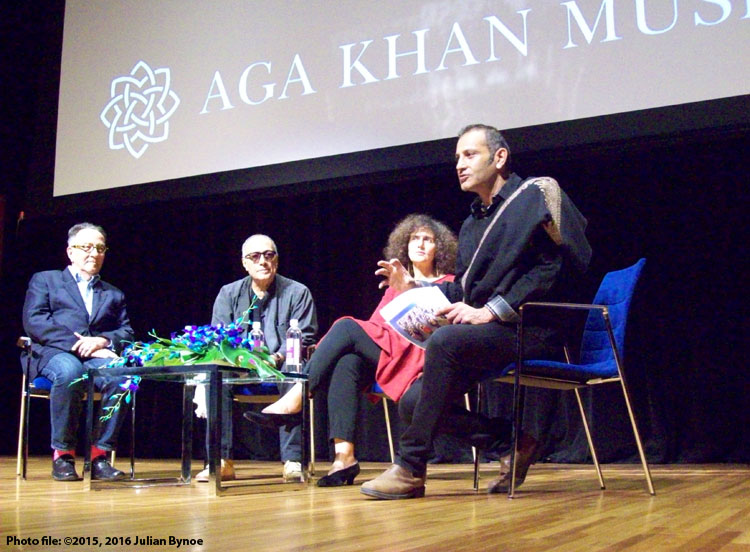 It would seem like a natural for any film director to branch out into the more physicality of the visual arts like photography and vice versa (best known example of late would be the Academy Award-winning director Steve McQueen of 12 Years a Slave) as master world cinema auteur Abbas Kiarostami presents his second art installation – after 2012’s Forest Without Leaves for London’s Victoria and Albert Museum – Doors Without Keys, taken over a thirty-year period in his native Iran and other locations in Italy, France and Morocco whilst between filming shoots currently at the Aga Khan Museum.

In a rare visit outside his country, Kiarostami sat down for a very brief discussion period with exhibit co-curator Peter Scarlet, a noted cinema programmer for the San Francisco International Film Festival, Paris’ Cinémathèque Française, New York’s Tribeca Film Festival and the current director of the Abu Dhabi Film Festival in the United Arab Emirates; at the media opening of Doors Without Keys last November 18 into the meaning behind his latest work, which took about two years in the making to bring to Toronto on the first stop of a touring exhibit of the museum’s first-ever solo exhibition as an extension to his forty-year career.

“First of all, I must say that I am very grateful and glad that this has come here on display,” he said through a translator. “I think I came here on an earlier installation [back in August 2015, and] from the very beginning I had this individual portraits of doors but even when I just kept them in storage in my home [in Tehran], I knew that they would be preserved or become formed into an installation adjusted for an exhibition.

“And as Peter (Scarlet) had mentioned [earlier in the discussion], I’ve always had my camera with me and wherever I went with it, I visited different countries in a context I just captured the very specific “emotions” of these doors that would give me as signs of a world that was about to disappear,” Kiarostami continued. “And in that (previous) film clip (his 1987 classic Where is the Friend’s Home?) that was just shown; these doors are really like at the end of their lifetimes like if they were our lives.

“So it concerned me, seeing them here at the installation of what I hadn’t experienced myself before I went away I wouldn’t have imagined, gives us emotions that is provoked and the addition of that emotion that can be felt from these doors, filling up and creates a specific space with, if not nostalgia, but of this awareness of being pulled into something that one can experience.

“Of course, my wish is that you could see (the exhibit) before I talked about it, but maybe I guess at the same time the feeling is so obvious that there wouldn’t be much left to say about it and we could have a conversation about this world before us." 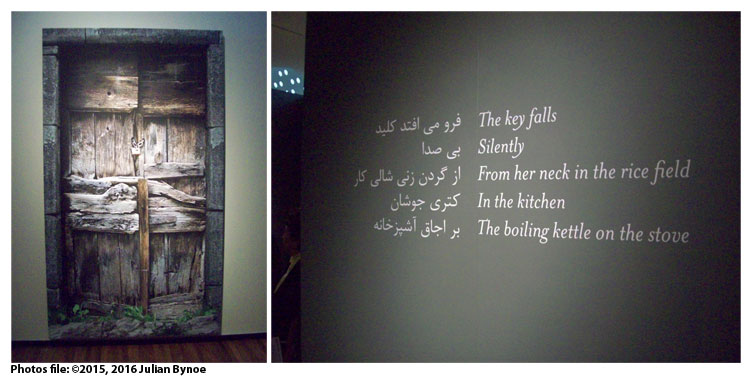 Photos and poetry mix together with Abbas Kiarostami's Doors Without Keys exhibit, both created by the noted film director.

The Cannes-winning director related the significance of his subject matter to an ever-changing world where nothing lasts forever, not even something as simple as the common everyday item as a door. “In the last (few) decades about the very meaning and function of doors and the impression that you will probably feel from these doors that it reflects the new generation of doors lately that has replaced those previous doors."

“At one time, doors were just like walls,” he said. “They were the sign of a fortress and there were people, more or less, had this specific experience of these doors that they would have no idea of what was going on behind the door and the people behind that door would have no idea on was happening on the other side (either).

“So the experience of this lost world was something, which I am grateful to (co-curator) Amirali Alibhai and this place [the Aga Khan Museum], I was able to convey this in this specific display which I must say is the most successful, the most thoughtful way of approaching my work and the experience so far is that the way the installation has been brought together is really something and really touching to me and I hope that you all feel this in this space that has been created.”

Abbas Kiarostami: Doors Without Keys continues through March 27 at the Aga Khan Museum (77 Wynford Drive). For tickets and information, call 416-646-4677 or visit: agakhanmuseum.org. Please click here for previous review of the exhibit.