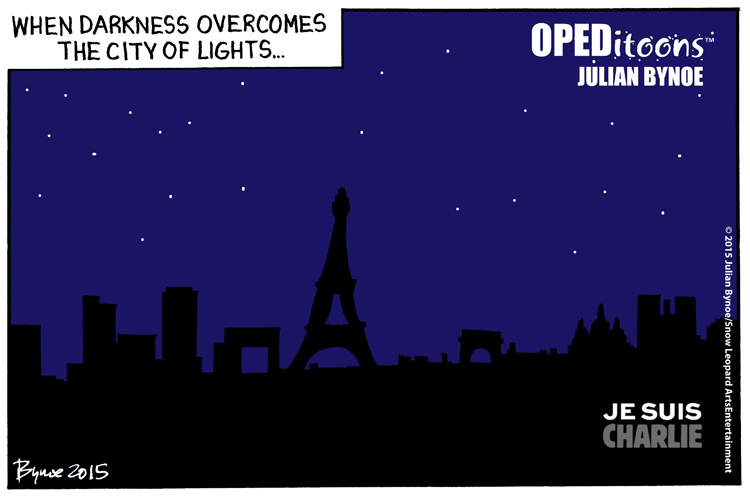 This could apply to the horrific events that casted the first dark note of 2015 when, like the rest of the world, I was shocked and appalled by the brazen attack on the French satirist magazine Charlie Hebdo in Paris on January 7 by two gunmen dressed in black and ski masks, Franco-Arabic brothers Chérif and Saïd Kouachi, stormed into the controversial publication’s offices on the day of their weekly editorial meeting armed to the teeth and mercilessly murdered not only ten of their editorial cartoonists and their editor/cartoonist Stéphane “Charb” Charbonnier, they also took the lives of two bystanders – a maintenance worker and a visitor – and two Parisian police officers that were just there on the street on their way out to their getaway car.

With witnesses hearing them shout “Allahu akbar” (“God is great”) and “We have avenged the Prophet Muhammad” as they left the building, the Kouachi brothers fled town and later their closest friend, Amedy Coulibaly along with his girlfriend Hayat Boumeddiene, got involved by fatal shooting a rookie policewoman and holding up a kosher supermarket in Porte de Vincennes at the eastern edge of the city and taking hostages, demanding the release of the Kouachis in return for the hostages, in which four were previously killed. That all finally came to an end with the deaths of the brothers and Coulibaly on January 9 by the police – Boumeddiene currently remains at large – and a shaken city and nation on the aspects of terrorism being used to silence freedoms of speech and expression.

Granted, Charlie Hebdo had a knack of crossing all sorts of political, social and religious lines that often went too far with their often crude cartoons. Reasons for the attack were their November 2011 issue in “inviting” the Prophet Muhammad to be its guest editor and putting his caricature on its front cover (Islam forbids any visual depiction of him) that got their offices firebombed and in 2012 published more Muhammad cartoons in demeaning and pornographic poses.

The French government did scold the magazine for their behaviour, but nonetheless maintained their democratic principles and beliefs in a free and open society in upholding their basic rights to continue publishing. While I proudly and firmly stand with the “Je suis Charlie” (“I am Charlie”) movement as a fellow cartoonist and journalist, I wouldn’t have given them such praise for pushing the button that have cost several innocent people their lives.

In my early years with Outreach Connection, I started off as an editorial cartoonist and have had my fair share of offending certain groups with my commentaries and even faced some censorship from my editors. But at least the paper, during its twenty year existence, still allowed me to have a (near-) carte blanche approach and was still respected for my views, even if they weren’t loved by a small minority of people. And we agreed to disagree.

Why is it that some people can’t hold that same attitude and feel that the only way to protest is through violent measures? Do they really believe they will stop and cower in fear, never to raise their own opinions again? And why take down 17 innocents with you? Simply calling for a boycott of the magazine or not even reading the magazine period would have sufficed. There was absolutely no need, in a democracy, to lower oneself to acts of pure evil and murder to get one’s way in whatever name. The Prophet Muhammad was considered a man of peace, as a majority of Islamic practitioners are, would not have condoned this act were he was alive to see this, thus proving their epic failure to curtail the very freedoms the Kouachis and their accomplices’ intended with their misguided actions.

It’s more important than ever, that freedoms of speech and expression must be fully guarded against those who seek to use weapons of hate and fear to silence differing voices. This is the aspect and credo of any functional society and democracy to thrive and survive and not allow prejudice and xenophobia be used against one group that tends to have a few bad apples more than willing to stifle our basic rights and public safety. 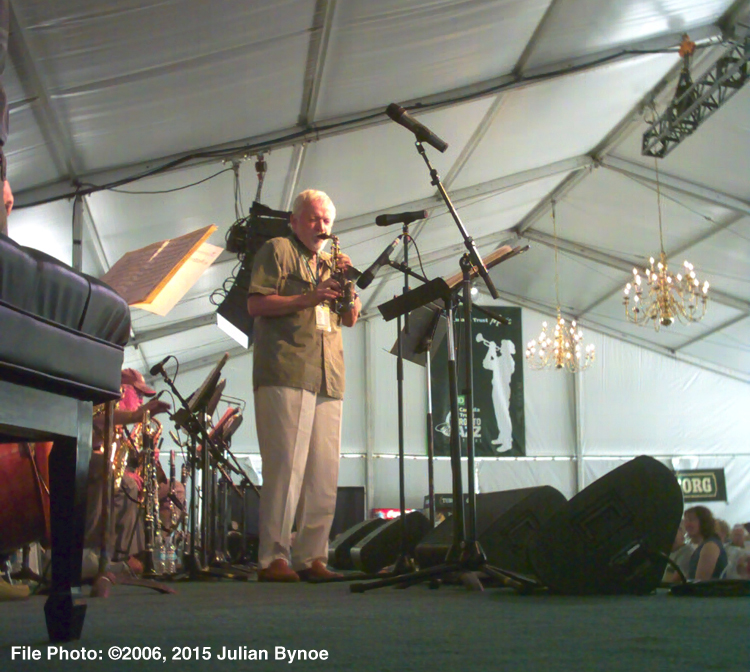 Upon hearing that Canadian jazz saxophonist, advocate and one of the cofounders of the Toronto Jazz Festival James Galloway had passed away in a healthcare facility in Toronto on December 30 after a lengthy illness at age 78, was a bit of a surprise to me and brought a lot of fond memories of him and his efforts in promoting jazz in Toronto, Canada and the world, including personal ones.

Always with a clove cigarette in one hand and quick with a pun, Jim was a real pistol at every Toronto Jazz Festival media conference during his time as Artistic Director and sometimes performed there for its first 25 years either with his famous Wee Big Band and his smaller trio efforts. How he managed to pull in the really big legends like Miles Davis, Toots Thielemans, Lionel Hampton and Wynton Marsalis (but regrettably never could get Ella Fitzgerald or Horace Silver to come) sure wasn’t a small feat with all his connections, especially during the lean years of the mid- to late 1990s when the fest’s finances were shaky with sponsorship funding rules that changed, forcing many arts groups to wean themselves from tobacco company money for others to step in.

And just when it seemed all was lost and the festival would have to be cancelled, Galloway and his tireless efforts, alongside with Patrick Taylor, managed to save it for another year. Today, the festival that started as an eight-day event in 1987 now attracts in excess of 500,000 loyal patrons annually spread over ten days and has brought over $500 million in tourist dollars to the Toronto area.

I’ve had ample time in meeting and working with Jim earlier in my arts journalist career on several occasions. Most notably was the time I was working on a feature on the lack of a jazz radio station in Toronto, pre-JAZZ FM days and was granted a short sit-down one-on-one interview. His views were sharp and optimistic at that time as well as insightful in what it would take for a jazz station to survive. And his willingness to take time out for me, a yet-untried journo, including in allowing to cover the festival on a yearly basis for a small street paper like Outreach Connection left a big and respectable impression (although I really wish he had invited Aziza Mustafa Zadeh during his time).

Galloway stepped down as Artistic Director in 2009 to concentrate on his music and failing health. In 2013 he openly lamented the lack of jazz acts in the festival of late, wondering aloud if the word “jazz” should remain in the title. Being at old school type, I couldn’t blame him too much for his comments at the time. Yet, he must have realised that most of the pioneers of the genre had retired or passed on and the fest is simply looking to survive in the same way he had to keep it going under his watch.

His last appearance was last October 31 at the Old Mill Inn for the annual Ken Page Memorial Trust benefit concert. Despite his illness, he was a champion of the music and a trouper to the end. It’s a pity he wasn’t given the Order of Canada for his efforts in promoting jazz in this country, but I guess I can easily live with the fact that the Toronto Jazz Festival is Jim’s greatest legacy he left to this city that the music community should be grateful for. Not bad for a little man from Kilwinning, Scotland who came here in 1964 and made a name for himself and in the jazz world.

Jazz fans, the festival and the media will miss Jim for his seemingly herculean energy and deep-rooted commitment to jazz, along with his intellect and wit as much as I will. I simply want to say, thanks Mr. Galloway, for all your diligence and giving me a chance in those early days and above all, for keeping the music going.

Putting a challenge to conventional printmaking, noted artisans Ryoji Ikeda of Tokyo and Alberta-based Walter Jule have known each other as educators and friends for 30 years but have never done a joint effort with the art in all that time. With Threshold currently showing at the Japan Foundation, Toronto gallery space, they come together in absorbing each others’ influences of abstract and directness of each others’ art and countries.

As pioneers in printmaking and photography techniques, both also include Eastern philosophies and themes on time, light and existence, as best represented in Jule’s “The Birth of the Universe” done in photo etching on pearlescent gampi chine-collé paper accentuated with a violent burst of ink and a quote from the 15th-century Zen monk Ikkyū below its crystalline objects to prove such a point.

“Ochiishi Nemuro and the North Saskatchewan II” by Ikeda brings about a East-West meditative from his standpoint of an abandoned warehouse grafted above the image of a bridge over the ice-choked river in earthy browns and “Staged with a fixed time” done in aquatint, drypoint and mezzotint on gampi of what would appear to be empty room with unintelligible scribbled text seen here in the piece.

While most of the exhibit is awash in browns, greens and bronzes, some do contain moments of colour like in Jule’s collage “Like Empty Space” with wooden pegs on little bits of diluted blues for some depth or Ikeda packing a wallop of orangey-red for “Deposition of memories” quite boldly. The only difference with these two artists is their styles: Ikeda goes for subtlety and unpretentiousness, whilst Jule gets to the point, if one compared the contrasts in the former’s search for spiritualism within a building’s brickwork in “Revelation of Time” and the latter’s obviousness in “The Original Movement of Now.”

Over the theme of memory, one doesn’t have to look no further than the “Untitled” series Jule collaborated with poet Wendy McGrath on childhood memory and cultural historical references to have some characteristics; as continuing to ponder on what went on within the ruins of a long-abandoned house’s interiors and depilated furnishings in “Untitled B” Ikeda tries to unlock.

Both masters push a lot of boundaries on Threshold to make lithography more elastic and aesthetic in balancing itself for each art piece and imagery they pose on the viewer and themselves on this thoughtful exhibit’s creativity.