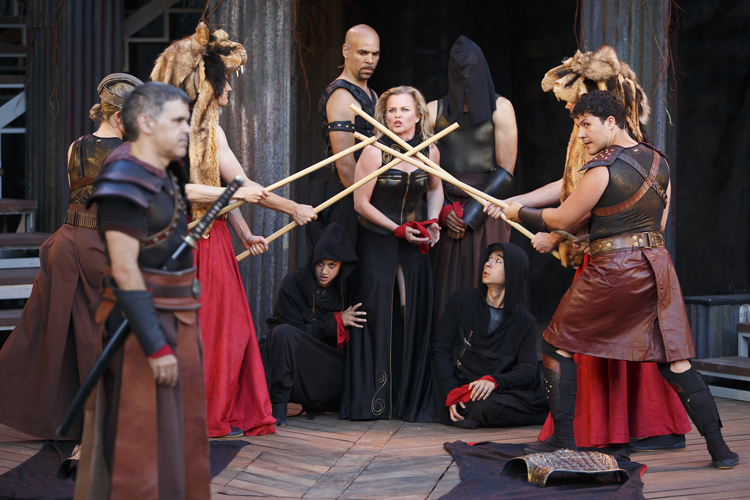 It’s a bold move for any theatre company to tackle one of Shakespeare’s bloodiest works Titus Andronicus and make it accessible for audiences. With this East-West version done by Canadian Stage, it’s proven to be a bold and mature direction the company has taken and is refreshing to see after so many years of family-friendly fares from the Immortal Bard’s repertoire that they’re willing to take some risks.

Returning home to Rome after a gruelling ten-year battle with the Goths, Roman general Titus Andronicus (Sean Dixon) brings his war booty including the defeated Queen of the Goths Tamora (Shauna Black) and her sons and slave-cum-lover Aaron (Beau Dixon) before the Senate. Titus has her eldest son Alarbus executed according to tradition and to atone for the loss of his own warrior sons killed in action, all but for his surviving son Lucius (Emilo Vieira), despite Tamora’s pleas.

The Roman Empire has been without an emperor during the war – and the late leader’s two sons Saturninus (James Graham) and Bassianus (Alexander Plouffe) jockeying to take over – the Senate looks to have a leader selected by the people instead of birthright, the Tribune of the People Marcas (Jan Alexandra Smith), who’s also Titus’ sister; elects the general to take over. But he passes the title onto Saturninus, who in turn takes Tamora to be his consort, little realizing she’s plotting to wreck a horrible retribution on the House of Andronicus and Rome.

Having her two sons Chiron (Gwenlyn Cumyn) and Demetrius (Michael Man) kill Bassianus and savagely assault Lavina (Chala Hunter), also Titus’ daughter; the wheels set in motion for double-crosses spiraling into psychotic madness on the general already wracked by the traumas of war and further losses that unbeknown to them all is another player is setting the scene to bring all three camps into ruin.

Sam Sholdice’s Japanese-like score and the earthtone aesthetics of Angela Thomas’ pan-Asian costuming mixing old and new, Titus is the strongest Shakespeare in High Park production CanStage has put on in ages. From director Keira Loughran’s slick, sexy and savage guidance using the Royal Shakespeare Theatre’s visionary Yukio Ninagawa 2006 production Taitasu Andoronikasu as a template, the play’s pace, emotion and tense-filled characters never slows down for a moment right up to its fateful climax.

Sean Dixon makes for an excellent Titus, whose direct handling of the conflicted soldier retains a sense of bushido – the samurai code of honour – yet merciless in his actions and plagued by the consequences weighing on his soul to the breaking point. Black pulls a sultry swagger and ice-cold vengeance that can’t be beat, along with Hunter, Vieira and Beau Dixon equally great in their roles. The only weak point here is Graham’s over-the-top performance that’s more half-comical than tyrannical.

A highly structured message about the spoils of empirical ambitions gone awry is not lost here or on the audience, although the play is extremely violent and would only suggest this for audiences over 12, so keep the younger crowd away from it, even if its visual language is only imitated. Titus Andronicus’ naked aggression and political tragedy hasn’t wavered its lesson in over 420 years after its first appearance and this adaptation is no exception with is Asiatic influences steeped thoroughly. 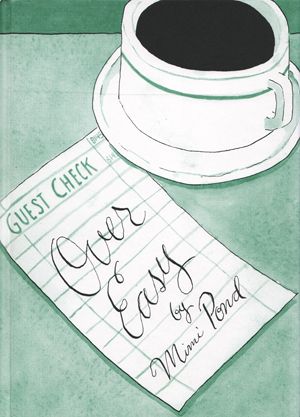 In memory of Tommy Ramone

In our health-obsessed society when we watch our carbohydrates, allergen- and pesticide-free, non-GMO lifestyles we’ve attuned ourselves to (which there’s nothing wrong with any of that), one had to admit the eateries of yesteryear had something few don’t have now: personality. While you can find the traditional greasy spoon diner where sodium and cholesterol is no object, cartoonist/illustrator Mimi Pond recalls her own experiences working for one in her candid but semi-autobiographic account, Over Easy.

Placing her alter-ego Margaret as growing up in the typical post-World War II American suburbia in 1960s San Diego and attending the California College of Arts and Crafts in late 1970s Oakland, she becomes aware of a changing mood rising against the post-hippie residue and disco era giving way to the rising punk movement everywhere. Denied financial aid to carry her through fourth year and a degree from CCAC, Margaret stumbles upon the Imperial Café where the food, staple as it is from other diners, is impeccable and gets a job waitressing there.

Run by the easy-going over Lazlo Merengue, “Madge” discovers as she works from way from dishwasher to waitress of the staff microcosm that make up the character and environs of the place: the ever-cranky and profane cook Tony Caruso and his meticulous assistant Sammy, prep chef Bernardo, pseudo-hippie dishwasher Daisy Deadhead and her fellow waitresses the hard-nosed Martha and her flirty sister Helen, maternalist Tina to the resident lesbian waitress Lesbian.

Her observations run a gamut of experiences about kitchen area politics, casual sex, dirty jokes and a series of drug dealers coming and going out of the Imperial Café, including the counterculture of the period makes for interesting commentaries and situations played out in full view of the human condition, not to mention the clientele that comes in.

Rinsed out in blue-toned inks and detailed linings, Over Easy is a no-holds, casual telling of a world facing a new phase and a disillusioned America struggling to make sense of its post-Vietnam hangover, the author makes it all very vivid and enticing through Madge’s eyes and worldly views and artistic aspirations amidst the gossip and engagement of her coworkers of a bygone era, thrown in with a hint of nostalgia.

Witty, edgy and eccentric of its angst and humorous concoction, Pond serves Over Easy as a delicious slice-of-life coming of age tale where she couldn’t call her own youth as misspent – or anyone else who remembers that indecisive period, either. 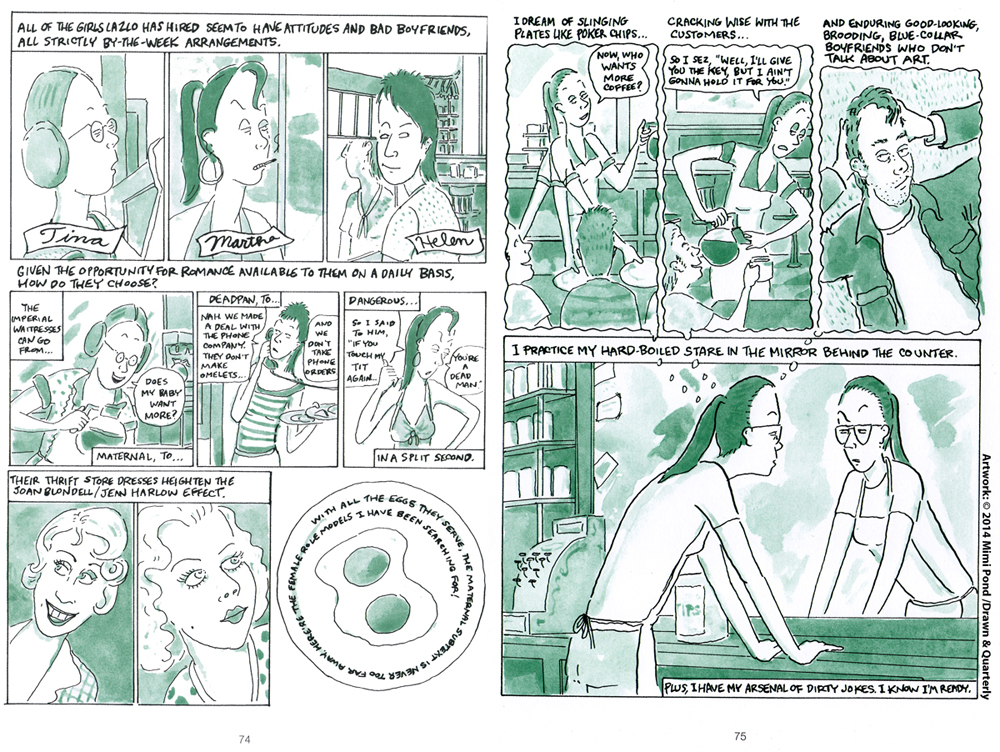 A editorial cartoon tribute to the last surviving member of the original lineup of seminal punk rock group, The Ramones. 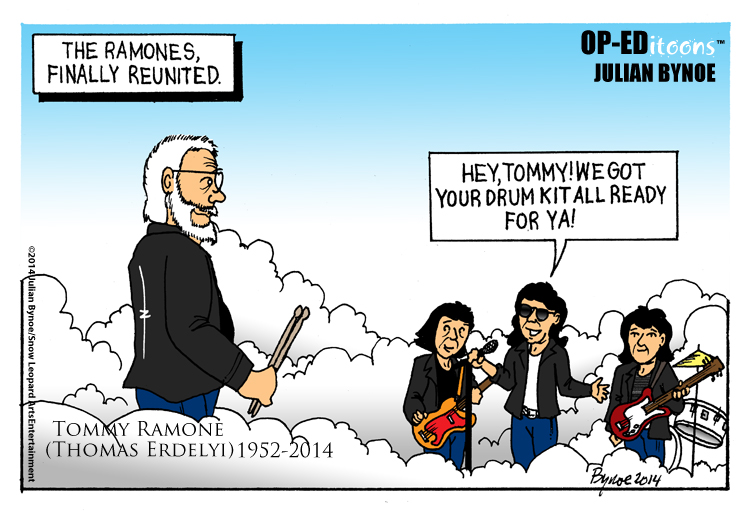 This can also be seen on my editorial cartooning page, OP-EDitoons

After the frenzy of the World Cup and cinematic blockbusters still looking to earn your attention in the meantime, there are cultural and theatrical events around and outside of Toronto from July to August should provide an alternative to your basic summer entertainments from the usual to the downright eclectic. 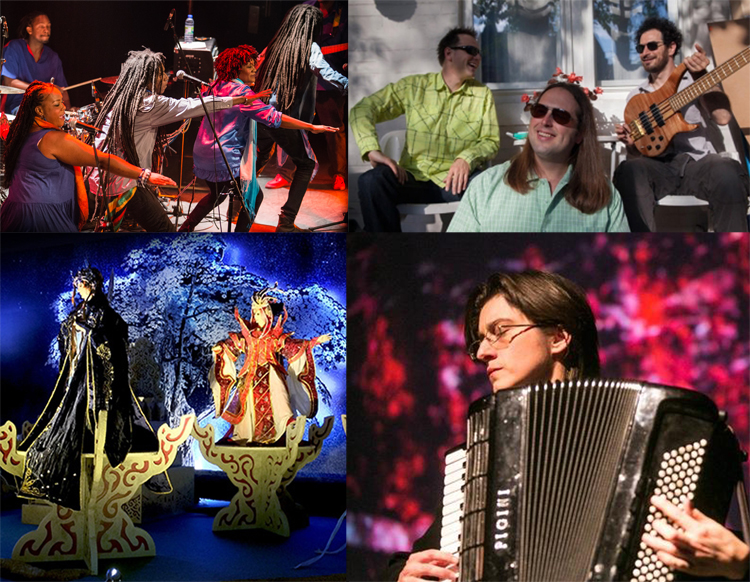 Soulpepper Theatre continues with the Reginald Rose’s masterpiece court drama 12 Angry Men now extended to July 26 and upcoming productions of Molière’s Tartuffe (August 7-September 20), A Tender Thing (August 14-October 1) sees an elderly Romeo and Juliet story unfold and Canadian classic Glenn (August 26-October 1) is remounted to look at the epochal piano man Glenn Gould and his four personalities that made the artisan and his enigmas so prominent, plus their ongoing weekly Saturday night Cabaret series. 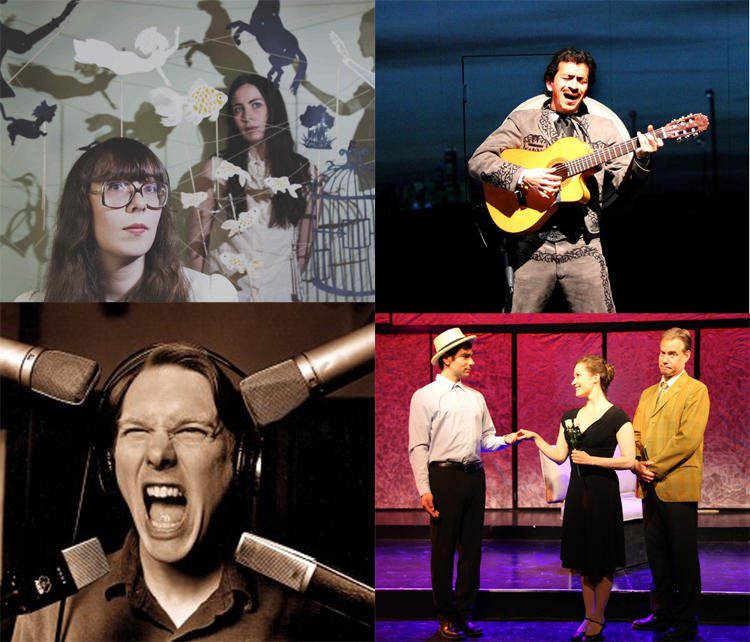 SummerWorks 2014 (August 7-17) brings the best of local, national and international theatre to town with the world premiere of the cooking comedy Chicken Grease is Nasty Business, Leslie Baker’s solo examination of mental illness and sexual predation in Fuck You! You Fucking Perv!, adult puppet show Unintentionally Depressing Children’s Tales, the rise and fall of Jiang Qing examined in Madam Mao and the Mexican musical El Jente – A Mariachi Opera.