A d’bi. young anitafrika double-bill and a sex-ed musical marks the 2016 SummerWorks Festival

Summertime theatre doesn’t always have to be regulated to Shakespearean fares as SummerWorks can attest to for their twenty-sixth year bringing in sixty-nine performances in theatre, dance, performance art, workshops and talks in the Queen Street West district of the conventional and unconventional, to the cultural and political starting early next month (August 4 to 14) of mainly Canadian theatre, including just one exclusive North American premiere of a gay Beijing Opera production in Mandarin, Mr. Shi and His Lover in the Special Presentations section.

Among many highlights coming to the major festival venues of SummerWorks hub the Factory Theatre (Bathurst Street), The Theatre Centre (1115 Queen Street West) and Scotiabank Studio Theatre (6 Noble Street), as well as to new venues the Artscape Sandbox (301 Adelaide Street West), The Drake Hotel and Drake Underground (both at 1150 Queen Street West) are the urban fantasy-drama Nize It, where a artistically talented African-Canadian youth initially surrenders his dreams of becoming a comic book artist, but forced to return in order to save his best friend and kid brother both facing real-life, separate dangers to learn about what heroism truly is to IN UTERO OUT, a shadow-puppet anthology play on embodiment seen in different perspectives about pregnancy and childbirth.

Trompe-la-Mort, or Goriot in the 21st Century asks the age-old question of over-reliance on technology in this techno-thriller when a anarchist is being chased with the entire world’s information in his possession by opportunist developers and a venture capitalist; female empowerment gets a historical examination and revisionism in Don’t Talk to Me Like I’m Your Wife; the debate of the female body politic and its societal role arises for NAKED LADIES and the Rip van Winkle story gets a comical geopolitical twisting in Mohammad Yaghoubi’s A Moment of Silence about a Iranian woman who awakens after three decades to find her country has undergone a revolution, war and her personal life all in turmoil.

Renown dub poetess d’bi.young anitafrika is back with two projects for SummerWorks, starting with the Afro-futuristic drama Bleeders about a post-apocalyptic Toronto after the Pickering Nuclear Power Plant has exploded and a group of black women form a small council in order for their survival in the wake of government repression and the ecological disaster that has unfolded; and a one-night only revolutionary protest song concert re-imagined as D’BI & THE 333 on August 9 featuring Waleed Abdulhamid, Odel Johnson, Christopher Butcher and Patrick O’Reilly backing her up at the Scotiabank Studio Theatre.

Also returning to the fest is Adam Lazarus, the creator of The Art of Building a Bunker; with his one-man show Daughter running on the beauty and horrors of men raised in a patriarchal society who have to face the challenges of becoming fathers themselves and some family-friendly fare with the magic-realism musical about the Syrian refugee crisis and the complications of immigration and cultural displacement, Amanah, as presented by the Maple High School Drama department.

Nightwood Theatre’s Osia , as written by Djanet Sears and directed by Brad Fraser; looks at a Ghanaian family and its youngest member Harmosia retreating into her fantasy world when the new future for themselves proves a bit difficult at time; from Vancouver’s Hong Kong Exile company with local talent Conor Wylie comes eatingthegame about a West Coast motivational speaker, after giving a game-changing speech, sends him packing to Toronto execute his next wheel-and-deal movement; Basement Studio Project does a multimedia tribute to 1990s digital animations in Sound Circuitz and SExT gets the feedback on the Ontario sex education curriculum reform through skits, song-and-dance and poetry from immigrant youngsters who want to know what their traditionalist parents won’t tell them about sexuality, cyber-bullying, sexting and rape culture.

For more different fares, there’s the film studio theme park production Chase Scenes #1-58 by choreographer/creator Ming Hon about our obsession with film culture and paranoiac pursuit through real-time figures and dancers within the cinematic realms and the one-day performance art piece Trophy on August 6, a interactive art installation tents at the CAMH Grounds at Queen West and Shaw Streets (1001 Queen Street West) where a person tells a true story about a turning point in their life and interchanging between other tents either by swapping stories and/or watching its own evolution.

“This year’s programming reflects the values that I have long admired about the SummerWorks Performance Festival,” said incoming Artistic and Managing Director Laura Nanni. “The 2016 Festival continues to encompass a diverse representation of cultures and performance practices, it makes space for bold artistic experiments and collaboration, and enables professional development as well as meaningful engagement between artists and audiences.

“As our world, our country and how we define performance continues to evolve, SummerWorks continues to evolve with it and lead the charge in new approaches to how we present and experience performance. SummerWorks artists also continue to question, provoke and imagine new possibilities. I couldn’t be more excited to immerse myself in my first Festival as Artistic and Managing Director and to form deeper connections with Toronto audiences and the artistic community to learn how we as a festival can best serve their needs.”

The Great White (Idea of) North

Left-right: “The Eaton Manufacturing Building,” “The Gas Works” and “Top of the Hill, Spadina Avenue” show an industrializing and expanding Toronto during the World War I years seen in The Idea of North: The Paintings of Lawren Harris – as curated by Steve Martin – at the Art Gallery of Ontario.

The Idea of North: The Paintings of Lawren Harris

You’ve heard of celebrities backing everything from books, fragrances, clothing lines and such, but here’s a rarity in itself: curating a touring art exhibit. The Idea of North: The Paintings of Lawren Harris, as arranged and presented by actor/comedian/art enthusiast Steve Martin; takes in around thirty artworks by or influenced by Group of Seven alumnus Lawren Harris at the Art Gallery of Ontario into three staves of his career – In the Ward, iconic artic landscapes period The Idealized North and The New City – the former and latter sections focused on of then and now to reflect the changed contrasts of the Toronto scene to give us the city we once were and where we are now fits the venue and the theme given.

Mainly all oils on canvas, In the Ward has what Harris captured of early 20th-century Toronto going through industrialization as etched through his brushstrokes seen in “The Eaton Manufacturing Building,” where the present-day Eaton Centre now stands; and “Gas Works” are harsh and dirty as the urban centre is justly displayed. Yet he’s able to absorb the suburbia with kinder eyes like “Winter in the Ward” and “Row of Six Houses, Back View, City Painting III” has a nice usage of pastels and the thickness of the oils to get the heaviness of the snow that’s also seen in “Rear of Houses, Francis Street” and “Houses, St. Patrick Street.”

Left-right: A sample of pastel works by Lawren Harris (“Snowfall”; “Row of Six Houses, Back View, City Painting III”; “In the Ward”).

Never losing the momentum of a growing city and its diversification, works as “Snowfall” and “In the Ward” sticks heavy on the purples and blues and a everyman figure looking on adds to the environs, much as “Top of the Hill, Spadina Avenue” relies more on the earth tones and greys makes you realize how underdeveloped parts of this city really was then is a eye-opener. 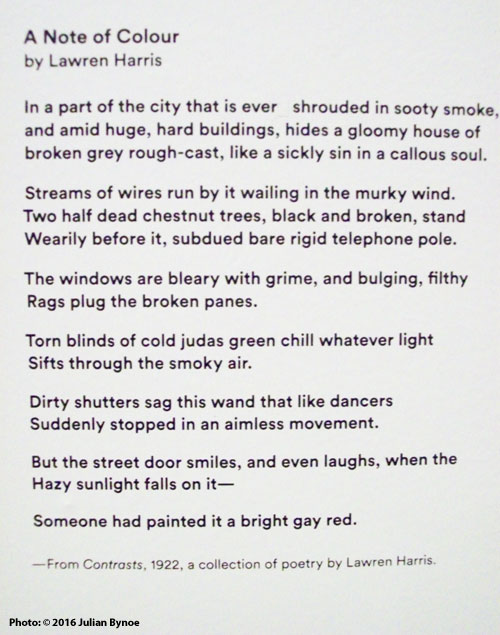 Lawren Harris the poet: A touch of words accompanies a painting at The Idea of North exhibit.

The works that made Harris a legend seen in The Idealized North may lay heavily on the stereotype of the Canadian wilderness to most of the world (and to ourselves), the majestic beauty remains be it in the lone weathered tree stump of “North Shore, Lake Superior” or “In Buchanan Bay, Ellesmere Island” as the change in technique and presentation in being more abstract, including the graphite sketches, to the really gorgeous examples are the overlapping clouds overtaking the landscape in “Lake and Mountains,” “Untitled (Mountains Near Jasper)” and “Mountains in Snow: Rocky Mountains Paintings VII.” 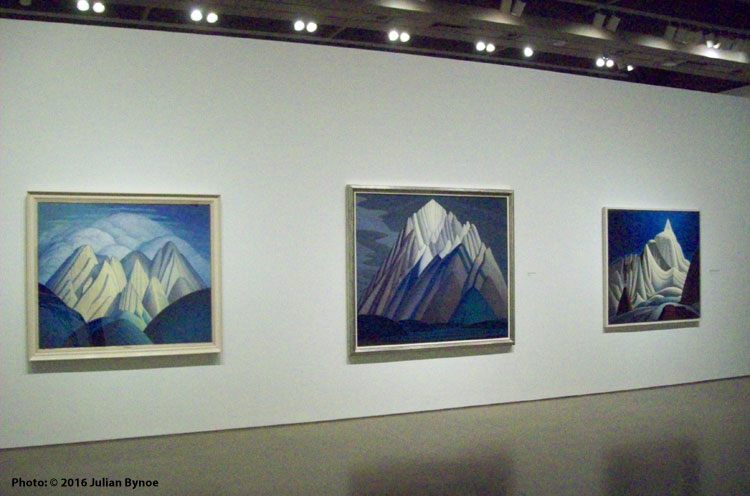 Left-right: “Untitled (Mountains Near Jasper)”; “Mountain Forms” and “Mountains in Snow: Rocky Mountain Paintings VII” – the abstract landscape works that defined Lawren Harris, the Group of Seven and our nation.

Although The Idea of North on Harris’ end concludes with 1936’s “Poise (Composition 4)” laying the inspirational seed of the vision of the future City Hall and Nathan Phillips Square quite briefly, it continues with local contemporary artists Martin allows to participate and add weight of our daily city lives. 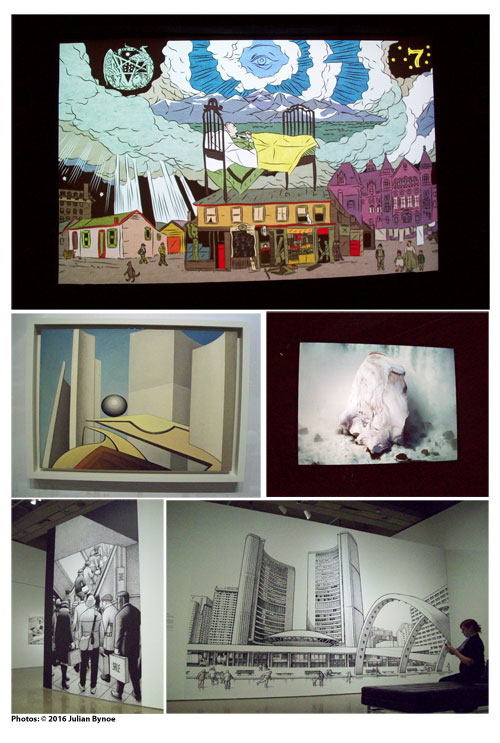 This is clearly seen in cartoonist Nina Bunjevac’s crosshatching shades and clean linear art of our urban crawl “The Observer: The Ascent, Dundas Subway, Sunny Days;” photographer Anique Jordan on the African-Canadian experience of her re-imagining of the British Methodist Episcopal Church, “Mas’ at 94 Chestnut” of churchgoers in Victorian dress and African aesthetics blended in the composition, situated next to Harris’ “Dr. Salem Bland;” the animated shorts created by Pat Shewchuk and Marek Colek under the banner of Tin Can Forest in a trio of Harris’ fictionalized dreams based on Slovak art, occult folklore and the Canadian boreal forest “Isis Unveiled/Lawren Harris’ Theosophical Dream/A Divine Comedy” are quirky and bright and as a finishing tribute, the Jennifer Baichwal and Nick de Pencier looping video project “Ice Forms” recalls Harris’ artic landscape for all its surrealism of the American Falls at Niagara Falls beautifully.

Martin certainly gets the flavour of Canada and a national treasure like Harris for The Idea of North without having to resort to patronizing notions, taking the approach with structured and clear intelligence in the displays and work shown. In a way, the exhibit reintroduces us to what treasures we have with our artists and their works they’ve left for us.