Following in the fine tradition of music industry satires from This Is Spinal Tap, Fear of a Black Hat and Get Him to The Greek, comedy trio The Lonely Island – Andy Samberg, Jorma Taccone and Akiva Schaffer – join the said ranks with the Judd Apatow-produced mockumentary Popstar: Never Stop Never Stopping that lives up to its subtitle in taking a delightfully riotous strip off the industry with true verve and audacity.

Focusing mainly on Conner4Real (Samberg), a Justin Bieber-esque pop king who went to huge solo career after the breakup of his band Style Boyz – a Beastie Boys-like trio – he started with his junior high school buddies Lawrence (Schaffer) and Owen (Taccone). With the taste of success and excess comes with an expected bloated ego with Lawrence retiring to a bitter life as a dirt-poor farmer in Colorado, but Owen remaining on as his onstage DJ (who in reality runs everything through a iPod).

Chronicling on the release of his sophomore album, CONNquest, Conner runs into tons of problems with the album and consequential world tour ranging from a corporate sponsorship with an appliance company that literally causes a continental blackout, the tour that needs to be bolstered by bringing on a upcoming talented hardcore rapper (Chris Redd) to even crazier stage gimmicks and antics just to stay on top of the game from yes-men roadies to backstage management trying to keep it all centred when it all briefly comes crashing down on him.

The Lonely Island trio skewers all of this with gusto with their reality TV-style direction as they’ve done with their Saturday Night Live shorts, which included the now-infamous Samberg/Justin Timberlake duet “Dick in a Box”; and more than enough pop/rock cameos way too numerous to sound off are quite happily spoofing themselves and the industry that feeds them.

Samberg does a real good sendup as the egotistical Conner trapped by his own fame and the pressure to remain relevant in a here-today, gone-today business while seemingly unwilling to patch up things with his ex-pal Lawrence despite the prodding of Owen and their manager (Tim Meadows); Sarah Silverman works as the usual harried publicist who’s more than willing to do her own share of sucking up to her client while cutting others down for it and Redd as a total standout here as the crazed Hunter the Hungry for all his upstaging moments and mind games he plays when the cameras are on.

Popstar definitely is refreshingly hilarious in its all-out satire in tone, pace and script from the trifecta of Samberg, Schaffer and Taccone for their second film brilliantly and the songs they crafted from taking pot shots at Osama bin Laden, the Mona Lisa to legalizing crack cocaine are one of this year’s cinematic comedy highlights.

Heidi upholds on a high note 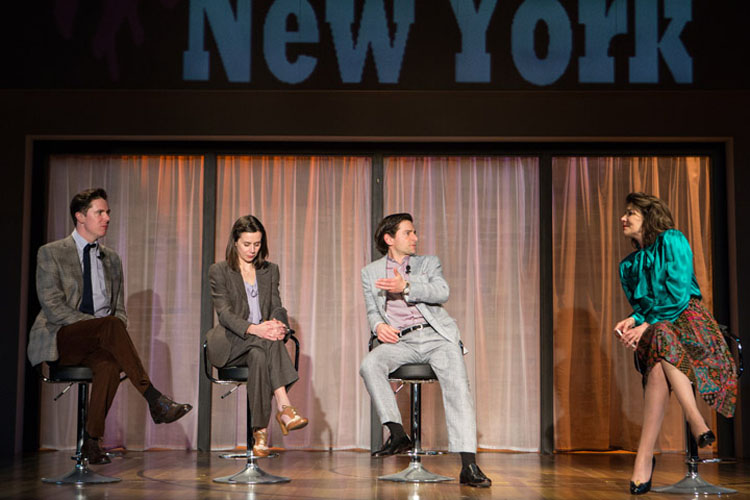 Wendy Wasserstein’s Tony- and Pulitzer Prize-winning feminist masterwork The Heidi Chronicles, as done by the Soulpepper Theatre ensemble, examines one woman’s life journey and the ideas that formed her and her beliefs done with humour and drama in late-20th century America on what fulfillment is or what it should be as a way of finding self-happiness in a clear cut and definitive manner in its two-hour running time.

The play’s woman’s art historian heroine Heidi Holland (Michelle Monteith) races back and forth through the last thirty years of her forty years of existence from the idealisms of the 1960s to the “Me” decade of the 1980s in regards to the many relationships she’s gathered and lost along the way from ex-lover Scoop Rosenbaum (Jordan Pettle), an arrogant journalist-turned-social climber to openly gay and sweetly considerate pediatrician pal Peter Patrone (Damien Atkins). Among the many changes that spread in between whether battling her insecurities of her college days to friends settling down and having children, the shy and mousy Heidi only has her career that now slowly feels like an empty comfort, making her question herself and her beliefs she has held onto for so long.

Director Gregory Prest maintains a relatively fast flow around Wasserstein’s sharp wit and banter around the characters toward each other on the stellar stage and lighting designs of Ken McKenzie and Shannon Lea Doyle’s artsy video projections matching each decade and moment it seizes including well-placed period pop/rock classics throughout the performance.

Supporting players Laura Condlin, Sarah Wilson and Raquel Duffy make their marks through multiple roles from Condlin’s vulgar-mouth radical lesbian Fran to Wilson as Heidi’s BFF lawyer are fun to watch, in particular of Chronicles’ highlight when Atkins, Pettle and Monteith appear on a morning TV talk show segment that’s a scathing satire on the materialistic and narcissistic ‘80s on the baby boomer generation with Duffy’s spot-on vacuous TV hostess fueling it.

The play hasn’t lost its bite since its debut thirty years ago and still is refreshingly topical on the choices that we make in life for the betterment of ourselves and/or the world in general, which is the core of The Heidi Chronicles and its central figure trying to figure what life is all about.

The Heidi Chronicles continues through July 24. For tickets/information, call 416-866-8666 or soulpepper.ca.

From the events that have come from Iraq and Syria of late where the so-called Islamic State have destroyed so many artefacts have been destroyed or sold-off in black market sales to the destruction of the Buddhas of Bamiyan in Afghanistan by the Taliban in 2001, one would get the impression that Islam has no sense of art appreciation outside anything of the realm of religion. Fortunately, as the Aga Khan Museum has proved and preserved, these views couldn’t be more further from the truth as Marvellous Creatures: Animals in Islamic Art shows of the inner and outer influences of the anthropomorphic come alive for the museum’s first family-focused exhibition.

Fabrics in the exhibit include a gilded dagger hilt from India on the left; and a Turkish yağlık (napkin) on the right show the craftsmanship of its embroidery.

Based on fables and fauna from across the Middle East and South Asia and broken into many categories, plenty of bric-a-brac all make their points from a well-preserved silver vase depicting a cockerel or pheasant from 6th to 7th-century C.E. Iran; an Afghani bronze-casketed brass astrolabe (early astrological device) contains images of animals, humans and even a few sea monsters or the mostly rich usage of watercolours, ink and gold on paper with Arabic text on a casket.

Being a seafaring society, Muslim have their fair share of sea mythologies that can be seen in illustrative manuscripts about adab (good manners) literature to teach courtesan youngsters on proper governance like Ibn al-Muquaffa’s Kalila and Dimma animal tales and hero stories from the Divan like “The Attempts to Rescue the Maiden from the Sea” with opaque watercolours, metallic and ink on parchment or the Iranian tale of vengeance “Kai-Khusrau and his men crossing the sea” where the titular adventurer face a sea of creatures from mermaids to narwhales.

A cast-iron ‘alam (filial) used in sacred processions atop on poles is shaped like a flame (left) and decorated with little dragons (center; detail); and a Central Asian felt robe depicting the life of King Solomon (right; detail) is Marvellous Creatures’ exquisite piece.

There’s an interesting display of twin dragons for a brass Kushkal begging bowl on each end used by dervishes and the Chinese-inspired Arabic dragon known as a Simurgh, whose duality of being good and evil is explained. Nephrite jade and agate cups of bronze, gilt and marble cups from Mughal India are gorgeous examples of the craftwork displayed here. For the more simple, “Portrait of a Royal Stallion” from 16th-century C.E. Iran is a good one or for something totally cute, a 12th-century C.E. gold alloy cat earring from Central Asia has its whimsy.

Among the many fritware or stone-paste in the exhibit is this bowl of a griffin from either Syria or Iran.

As stated earlier, it is a family-styled exhibit and to show how kid-friendly it is, a little comforting book zone tucked neatly in a corner where pillows, carpeting and children’s literature of all kinds of animals stories – including Rudyard Kipling’s The Jungle Book – is encouraging to get youngsters to read and a boon for the museum to come up with something like this, along with the artistry surrounding them.

From its 20th-century felt embroidered robe showing the exquisite detail of King Solomon to a battle depiction of a Iranian folk hero up against a unjust king and his army of demons seen in “Rustan Fighting Puladvand and his Army of Divs (Demons)” or a 10th-century C.E. Tunisian green moulded glass griffin, Marvellous Creatures doesn’t disappoint in the title and exhibition display for exposing the whole family to another side of Islamic art not wholly focused on the sacred.