Worlds apart and together

A scene from Song of Extinction at Luminato’s Hearn Music Stage.

Within the decaying hull of the Hearn Station, it seems almost fitting to hold the world premiere of Music in the Barns’ Song of Extinction there (more for its setting and not just for the sound acoustics working in its favour) as a heeding symphony of the worlds of man and nature gone astray. For fifty minutes, the group’s chamber ensemble along with the Tafelmusik Chamber Choir and VIVA! Youth Singers of Toronto giving the right pitches, held court in a cornucopia of neo-classical aesthetics, electric organ and industrial sonic noise.

Composed by Rose Bolton to the scribes of Governor-General Award-winning poet Don McKay while the various vintage film footage of the everyday to Baroque portraits as spliced together by Gemini-winning documentary auteur Marc de Guerre rolling in the background, the work is deep and immersive about humanity’s relationship to itself and the animal kingdom, both being sacrificed under progress and simple arrogance of our so-called formidability.

Out of the fifteen tracks written from its instrumentals reflecting these sentiments like “The Anger of Sentient Souls” and “Human Cry,” one can also here this in the lyrics of “Where Are We To?” that McKay asks ourselves: “What are we to and what are we at and what do we creatures mean/strolling like time’s aristocrats through the Anthropocene?”

More than enough to absorb in just under an hour’s worth, Song of Extinction feels like a live, shortened stage version of 1980s art-house experimental film classic Koyaanisqatsi and just as riveting and provocative under the creators and music director/keyboardist John Hess who kept all three groups in harmony about disharmony and the need for balance.

Much as the idea of having something of an arts venue like the Hearn to hold something expansive like Luminato for all its productions and artworks under one roof was a good and interesting one, the concept was a work in progress at best and could be repeated again, although on a much smaller level. Accessibility was its Achilles’ heel that wasn’t always there in getting to and back from the Portlands-situated complex, especially with the infrequency of the free shuttle bus service (should have been three buses instead of two).

For an artistically-inclined city like Toronto, multiple venues are a key to the fest’s success as it has been for its decade-long existence to provide as many patrons to attend the events and to see what other places have to offer in general. Material-wise, the events and exhibits inside and out were worth viewing and at least the building interior was cool to the summer heat, which was a bonus; and the experiment a noble endeavour on the organization’s and artistic director Jorn Weisbrodt’s part. Thanks again to Mr. Weisbrodt and the many contributions, artisans and productions that he brought to the festival during his time with Luminato and hope that his successor Josephine Ridge will maintain the innovative vision this festival started ten years ago for this city and its cultural sphere.

An epic celebration of survival and destiny 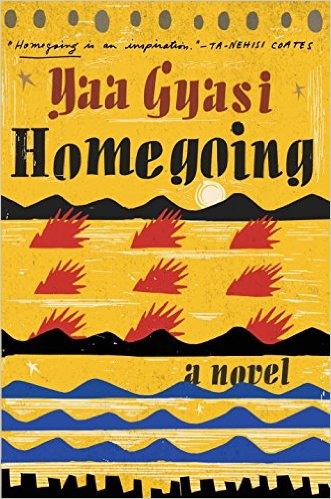 One of humanity’s greatest tragedies, the African Slave trade, is not an easy one to analyse or comprehend the magnitude of the impact and scars it has accrued in the latter-half of the last millennium, especially in a literary stance. Novelist Yaa Gyasi in her debut Homegoing melds two nations involved in the practice, Ghana (where she was born) and the United States of America (where she was raised and still resides) with a story of hardship, privilege, destiny and family comes out as a steady and spellbinding effort.

When the British were in control of what was then the Gold Coast of western Africa three hundred years ago, two Asante half-sisters were born from a cursed woman to live different lives. The eldest, Effia, was married off in a marriage of convenience to James Collins, the British governor of the Cape Coast Castle – otherwise known as The Castle – and settled a palatial life of ease as her offspring would chart the course of the history of the country, as British and tribal leaders sold thousands of their brethren to work as slaves in the Americas, experiencing war and upheaval to the modern-day state of Ghana.

Among them, unknowingly, is her younger sister Esi; held in the hellish dungeons of the Castle after a village raid by Fante slave traders and shipped to the plantations of the American South, while her own family line endures all aspects of struggle and discrimination in American history, from the Civil War through to the Civil Rights movement up into the present day as their descendants try to find their way and identities both shaped by slavery and fate.

Gyasi handles her subject and characters faithfully with a unflinching look at the slave trade and the histories of both countries that profited from the blood industry that sent millions in shackles as expendable chattels, yet never in an angry or accusatory manner which could have turned this into another cookie-cutter story of the African and African-American experience, but thankfully does not. She crafts it to be a story about trying to find forgiveness, resolution and rediscovery of heritage, even when some of the book’s characters darkest moments whose have less than happier endings.

Certainly one of this summer’s more intriguing reads, Homegoing is a highly impressive first book for Gyasi and her competent handling of the rich, complex histories of her native and adopted countries with a diplomatic amount of delicacy and engages into a triumphant ending of what is truly a celebration of survival.

Return of a disco king and a soul queen survivor

Heavyweights Brass Band/DJ Kardinal Offishall/We Came to Get Down: Swing vs. Street

Marching through the square and onto the stage, the local neo-Dixieland-like quintet promptly got the opening night freebies line-up to a good start with their self-composition “Brasstronomical” with a touch of reggae and rock thrown in and maintained that pace throughout their gig with original tunes and covers like the Bill Withers/Grove Washington Jr. tune “Just The Two of Us” nicely paced; a smooth R&B vibe over “No One Said It Was Easy” courtesy of trumpeter Paul Metcalfe soloing it to Rush’s “YYZ” fleshed out with freestyle jazz and funk-jazz twists.

Bringing out reggae legend Jay Douglas as guest vocalist to fill out the rest of the performance, he sang a swinging swagger to “Down the Road” and belted it out with covers of The Wailers’ ska chestnut “Simmer Down” and James Brown’s “I Feel Good” while doing a few comical dance moves that were a treat.

Left-right: While dance troupe Keep Rockin’ You took command with a friendly dance-off between swingers and b-boyers, Kardinal Offishall spinned his discs well but was inconsistant in presentation.

Choreographer and Keep Rockin’ You founder Judi Lopez’s dance-off ensemble Swing vs. Street had a friendly feel of a competing group of jazz swing kids up against a b-boy and -girl street squad backed by local group the Worst Pop Band Ever, which in reality were pretty good. The street dancers had some moves in locking and popping, but in all honesty, nobody can outdo a tap dancer when it comes to style.

Ending with a crossover of both genres to the tunes “Super Bad” and “Sing! Sing! Sing!” wasn’t too bad, including a two-minute lesson of doing the Charleston and the Biz Markie to cap it. Unfortunately, the only part that kind of lagged was rap star Kardinal Offishall in his debut as a turntablist. He could spin the old school tunes and mishmash with the best, but is too chatty with personal commentaries and commercialist plugs behind his new DJ venture that wasn’t very professional. Would the likes of Kid Koala and Deadmau5 do stuff like this?

KC and The Sunshine Band

Armed with strobe lights and the customary mirror ball, disco came back with a vengeance as the evening’s headliner KC and The Sunshine Band absolutely wasted no time in getting the party started with “(Shake, Shake, Shake) Shake Your Booty” as lead singer/songwriter Harry Wayne “KC” Casey strode onstage to a warm welcome to a packed City Hall square, followed by “Boogie Shoes.”

Jovial and self-depreciating how now at age 65 and a bit gravelly in voice that at first didn’t put him at his very best that night but improved, KC was willing to admit that his pretty-boy looks from the 1970s have long since abandoned him, did quip with certainty: “What the hell happened?! This is what Justin Timberlake is going to look like thirty years from now!!”

Other than his classic dance-pop smashes, the show had a lot of fun and energy and KC connected with the crowd with the same exuberance and moves like Mick Jagger and had the funkiest collection of sequined shirts I’ve ever seen from a performer in ages, brought it all down in closing out with “Give It Up” and “Get Down Tonight” (with streamers!). Disco still rules.

Despite the return of her pancreatic cancer diagnosis she’s been battling for the last three years, this definitely didn’t dampen the spirit or performance singer Sharon Jones put out along with biggest little indie studio band The Dap-Kings, belting it throughout to out-funk James Brown himself.

Along with backing singers Saun and Starr, who also did a couple of solo numbers in the opening warm-up from their recent EP Look Closer with “Hot Shot” and Motown-inspired title track “Look Closer (Can’t You See The Signs?)”,the petite soul/funk powerhouse tore it up with “Stranger To My Happiness,” “How Do You Let a Good Man Down” before slowing down with the James Bond theme-like coolness to “When You Love Me.”

Proving that this was a celebration of her ongoing fight, Jones invoked a all-ladies dance jam and smoked it with “I Heard It Through the Grapevine” where afterwards she joked: “I got so excited [there], I had to get them off the stage!” then continued with a Gladys Knight tribute “Neither One of Us (Wants to be the First to Say Goodbye)” accompanied to old ‘60s dance crazes from the twist to the boogaloo without flagging at all.

The best numbers went to “Retreat!” and finale “100 Days, 100 Nights” done with three different tempos all in one shot, but nothing could top her moment of all moments when Jones turned “Get Up and Get Out” into her anti-cancer mantra and promise to the audience vowing to beat it again, even kicking off her heels in the process; was the biggest applause she got all evening. Ms. Jones, I salute you.

The Toronto Jazz Festival continues through to this Sunday (July 3). For tickets and information, phone 1-888-655-9090 or visit torontojazz.com.