Left-right: “Maharaja Dhiraj Singh Riding”; “A Maiden Beautifies Herself in a Mirror” and “Nobleman Smoking on a Terrace” are part of the Aga Khan Museum’s exclusive double-bill exhibit of Visions of Mughal India: The Collection of Howard Hodgkin/Inspired by India: Paintings by Howard Hodgkin of the Muslim empire that flourished in India between 1526 to 1857.

Hooked on Indian arts since his Eton College days, celebrated British painter Howard Hodgkin has allowed himself to not only part with some of his personal collection of late 16th- to early 19th-century imperial Mughal court artworks on loan to Oxford’s Ashmeleon Museum, but has included a few of his own Indo-based artistry at the Aga Khan Museum for the double-billed Visions of Mughal India and Inspired by India exhibits, leaning towards the exotic expressiveness of both East and West.

It’s a personal coup for the Aga Khan Museum who has the exclusive North American stop of a touring exhibit of 60 works out of Hodgkin’s 115-piece collection – and continually growing, even for the Turner Prize-winning artist who turned 82 – as energy channellers to his subject and self that sits well of the expansive history of the Indian subcontinent of the both the daily life of courtesans and Indian mythologies of the Persianate society that existed from 1526 to 1857 come alive with their vibrancies.

Starting with Visions of Mughal India, the mostly opaque watercolours on paper pieces in vivid detail reflect the nobility of “Maharaja Dhiraj Singh Riding” of the lone majesty on horseback through a sea of delicate green background, the two enlarged representations “The Gopis Dance in the Forest (Sarat Purnima),” just recently reunited after many decades apart; of courtesan gopis (milkmaids) celebrating the autumn festival of Sarat of Ashvin or the serenading of a ruler seen in “Hindola Raga.”

One of the rarities in the collection is “A Lady Singing” since women of the period were mainly kept in seclusion on the depiction of courtyard life (unless they were dancers and/or musicians), even the refined naturalism shown in “Nobleman Smoking on a Terrace” as done by artist Ali Reza in 1670 gets a glimpse, as one of the many Mughal painters who worked in Deccan (present-day Hyderabad).

The Ragamala Series tells of Northern Indian stories of epic adventures of figures, gods, animals or yogis – mainly involving elephants – like “Elephants Fighting” to “A Elephant and Keeper” in portraits in which Hodgkin describes as “almost weightless” when in combat and if you look at them long enough, he’s right on the money.

A sample of the many finished and unfinished portraits from painter Howard Hodgkin’s collection at the Aga Khan Museum (left-right), “The Emperor Bahadur Singh” and “Prince Azan Shah Enters Ahmedabad (detail).”

Pageantry are a big thing when viewing the pigment brush drawing and gold on paper works “Prince Azan Shah Enters Ahmedabad” or “Royal Procession of Maharaji Sher Singh and His Sons” to the bountiful colours in “Maharao Ram Singh II’s Marriage Celebrations at Udaipur” is the highlight; but it’s the finished and unfinished portraits Hodgkin treasures greatly, especially the really sad-looking “The Emperor Bahadur Singh” done at the end of his rule diminished by his support for the 1857 Indian Rebellion that brought the rise of the British Raj.

Noted British painter Howard Hodgkin offers a few of his abstract Indian-based works for the Inspired by India segment of the exhibit with (left-right) “Surf”; “In the Garden of the Bombay Museum” and “View (Sunrise at Mahabalipuram).”

Inspired by India is a modest gathering of the artist-collector’s own work in scope yet highly prismatic and vivacious in his abstract expressionistic style found in the intensity in tiny piece “Small India Sky,” the splashes of flora surrounded by a encroaching dark green of oil on wood “In The Garden of the Bombay Museum” or the lithographic textures on intaglio-impressed Khadi paper for the watery coolness with “Surf.”

Opened just a few months ago and a bit out of the way location-wise out in Toronto’s east end near the Don Valley Parkway, the Aga Khan Museum is already becoming a major art venue to be reckoned with for the Hodgkin exhibits of a India seldom seen.

Zoning out at Union Station 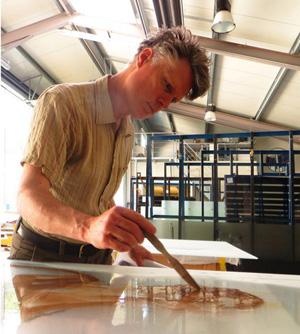 Torontonian architectural designer Stuart Reid at work on one of the zones of immersion glass panels to be permanently installed at the Union subway station this summer.

Soon to be unveiled at TTC’s Union Station is possibly the largest permanent public art commission in the city of Toronto’s history is zones of immersion, a glass mural project consisting of 166 panels of 2.1x1-metre sizing along a 152.4-metre wall of commuter life of our city, set to be seen this June.

Created by local artist, architectural designer and OCAD University professor Stuart Reid, whose work can also been seen at the Mississauga Living Arts Centre, the Intercontinental Toronto Centre Hotel’s Azure Bar and Reception, St. James Cathedral’s “The Calling of St. James” stained-glass window triptych and Bloorview Kids Rehab; over a several month period riding the subway of sketching passengers and writing poetry in creating panels at the Glasmalerel Peters Studio in Paderborn, Germany combining 13th-century stained-glass techniques with 21st-century digital printing and lamination to create a fair representation of human movement and experience of the everyday.

“It is filmic,” Reid said of the project, who spent painting glass panels for endless hours, including staying at the Peters Studio attic to show his dedication, “[and] immersive; revealing itself relative to the viewers’ movements – how close they get, where they stand on the platform; seeing themselves figuratively and literally mirrored in this subjective rendering of the very experience they are objectively part of at the moment of their viewing.” 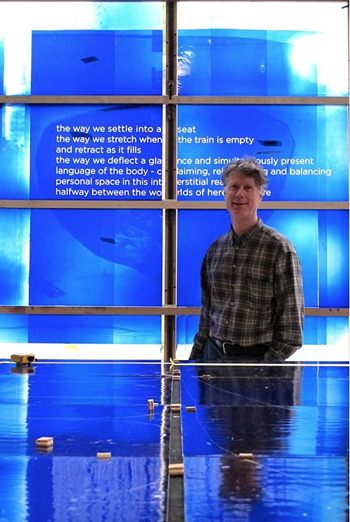 Already installed are 48 panels near the northern platform at Union of selected segments of the artwall as commuters stand right next to it while the southern platform segment will give the entire expanse of zones from across the tracks, viewing distinct framed vignettes lit by projected colour from specially-designed lighting for the piece.

For those who can’t wait for the summer unveiling, a gallery exhibit based on the project will be held at Yorkville’s Gallery Gevik next month entitled In Transit, where full-scaled drawings by Reid will be on display or catch the mini-documentary on the making of zones at the artist’s website (stuartreid.ca ).