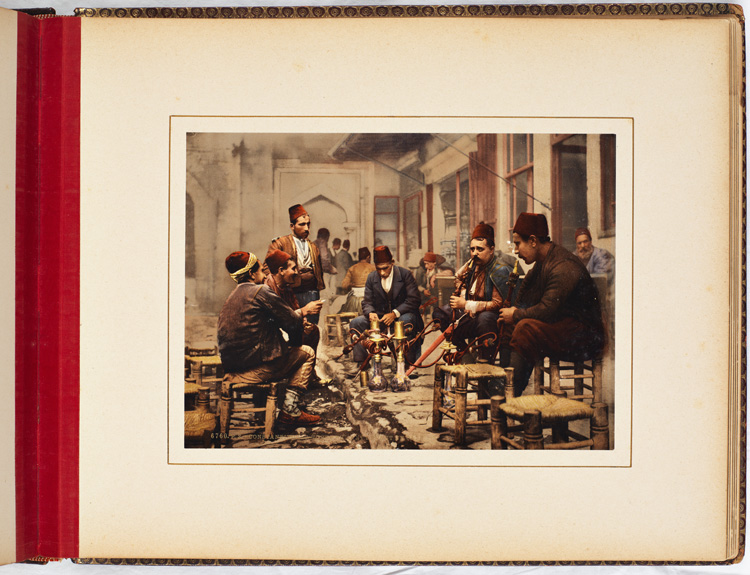 A City Transformed: Images of Istanbul Then and Now

While Turkey these days have been in the headlines of late and not for the better, especially being on the frontline witness, example and reluctant participant to the Arab Spring, its (un)enviable position as the bridge between the Christian Europe and the Islamic Middle East has moulded its character on all faces culturally, religiously, socially and politically and its stationary city straddled at the center of it all between two continents, Istanbul.

For the photo exhibit at the Aga Khan Museum, A City Transformed: Images of Istanbul Then and Now exemplifies these aforementioned examples by various photographers past and present in showcasing the changing city from the Ottoman Empire from the collection of noted Turkish business mogul, art philanthropist and collector Ömer Koç – the first to ever be seen outside of Turkey – to its ever-changing face as a way of how its flexible character is not afraid of being modern while steeped in its traditional artifice.

Left-right: Visionary Ottoman Empire leaders with a glass-plate camera; along with dignitary photo albums on display in A City Transformed: Images of Istanbul Then and Now shows of the Turkey that knew how to promote itself as the gateway continental divide between Europe and the Middle East.

This goes back to the period of the Ottoman sultans who saw the potential behind photography as a tool for international affairs as the full-blown portraits of Abdülmecid I, Abdülaziz and Abdülhamid II greet the exhibit visitor and a German Reisekamera (travel camera) dated from the 1870s to 1880s and the photographers of that time, some commissioned such as the Greek-born court photographer Vassilaki Kargopoulo for 36 years, some independent like the hobbyist James Robinson; took around the city.

On display also are the gigantic photo albums used in trade delegations to represent Turkey and selected photos of that time like the Galata Bridge taken in 1912 on gelatin silver (“Old Bridge before the Beginning of Construction” and “The Newly Constructed Galata Bridge”) by Sébah & Joaillier; Robertson’s salted albumen prints on cardstock “Nusretiye Mosque,” “Cemetery of Eyup” and “Obelisks in the Hippodrome” taken in 19th-century Sultan Ahmet Square or Swede landscape photographer Guillaume Berggren taking a snap of “Wooden house of Istanbul,” long extinct from the metropolis. Another feature are some hand-coloured photos (“Water Pipe Smokers”, “Golden Horn and Suleymaniye” ) digitalized for the exhibit that one can see the labour of love put into them and they are breathtakingly gorgeous.

Left-right: Guillaume Berggren’s “Wooden house of Istanbul” of a bygone part of the Turkish metropolis; old-fashioned stereoscopes presenting the original Viewmaster images of Istanbul in three-dimensional views and Istanbul in 1895 (top) and 2015 (bottom) get the panoramic treatment in A City Transformed: Images of Istanbul Then and Now.

Panoramic shots aren’t really anything new, but take a gander at the comparisons taken of the Istanbul skylines in 1895 with a noticeable cut-and-paste connecting to the one beneath it as taken by Turkish photography professor/artist Murat Germen, trained at the Massachusetts Institute of Technology; taken in 2015 are both impressive. And get this – Germen’s elongated panoramic wasn’t using any Photoshop at all.

Moving forward with Germen are his Muta-morphosis – Istanbul series done on expressively colourful Lambda C-prints in his mishmash of his hometown of blending the old and new have that fantastical element that isn’t forced in the least, but as a statement of maintaining some of its characteristic past with a contemporary hold of tomorrow, is not just a problem for Istanbul, but for all major cities worldwide including ours (also see his specially-commissioned Toronto panorama located in the museum’s pedestrian tunnel between the ground floor to its parking garage).

It’s an exhibit not sparing itself of any sense of sentimentalism of some long-gone facets as a reminder of constant change, which has always been there for anyone who has known city life, but as a means to keep our heritage intact in spite of that change A City Transformed is out to demonstrate that.

The Book of Memory

Not a lot of contemporary narrative fiction that comes out of Zimbabwe too often in reflection of its post-independence period, or written with a central female figure mired in its gender and socio-political stance of where one stands in African society. For her second novel, international trade lawyer-turned-author Petina Gappah writes about her homeland in The Book of Memory about the imperfect judicial system that has rotted away under Robert Mugabe’s autocratic rule in vivid fashion that aches sympathy for the Southern African state and the status of women there.

Written as a prison memoir by its protagonist, Memory, an albino woman waiting on appeal on her murder conviction for killing her white guardian Lloyd Hendricks, a Harare University English lecturer in a swift trial which her lawyer asks her to compose in detail to her circumstances, as she whiles away her time in the notorious Chikurubi Maximum Security Prison.

In it, she recalls her brief childhood living with her family in the township of Mufakose on the dusty outskirts of Harare five years after the War of Liberation from white-minority ruled Rhodesia, that was anything but relatively happy. Recalling her four other siblings, two that didn’t live beyond the age of seven, and living with her humble, respectful woodworker father and a emotionally-unstable mother, Memory was sent to live with Lloyd – or “sold” to, in her own words – by her parents as a preteen for a better life.

Growing up in Lloyd’s palatial estate known as Summer Madness, she gets the education and medical treatment for her albinism that she never would have gotten had she remained with her folks, developing a love for literature and equestrian sports. Despite these privileges that’s allowed her to go beyond Zimbabwe and back, somehow she is haunted by the way her parents gave her away to live with a total stranger, seeing the disparity of class and racial structures and the gnawing feeling of being chased by ngozi (vengeful tribal spirits) that she feels are connected to these points in her life.

All the while Memory describes prison life at its worse in particular the death row section where she resides, from power-tripping female guards, albeit one benevolent guard for her own personal reasons; horrendous conditions and the inmates she has befriended, all with their reasons for being incarcerated from the rather sublime and often ridiculous to the reasonably justifiable, all trying to survive and dream of life beyond the jailhouse walls.

Gappah mingles social commentary, cultural overtures, mental health issues and prison lore with believable strength and substance and spares the notion of a tragic heroine as to keep rising from her predicament and finding some solace being a bookworm; looking forward to the day of her freedom. Emotion does dance around the storyline and her characters, but not in a patronizing way as one would work into such a thematic book and manages to shine a spotlight on women in the correctional system not just as seen as a Zimbabwean or developing world problem, rather it being a universal matter in general.

The Book of Memory doesn’t pretend to give an uplifting ending and the clichés that come with it of any justice served (or is inclined to do so), for it is solid and simple reading about fate, love, memory, humanity and hope that some sense of redemptive matter can overcome many hardships against a loosely lawless country once the promising example of post-colonial Africa that seemingly lost its moral compass driven by greed, corruption and stagnation.