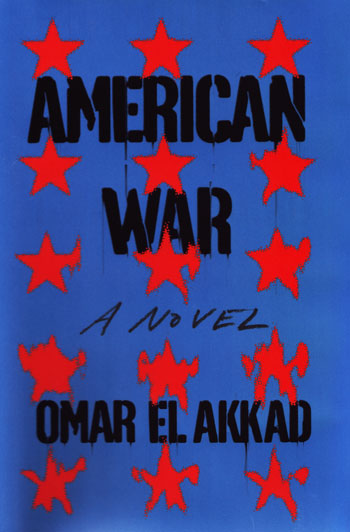 Dystopian novels are back in vogue in the current era of conservative Western governments ruling the roost, with the classics of George Orwell’s 1984 and Margaret Atwood’s The Handmaiden’s Tale getting new (re-)releases on life. Another one enters the fray into this territory with Omar El Akwad’s stunningly shocking debut, American War, which mirrors a few pressing issues of today and yet could almost predict what may come down the road if we’re not too careful.

The United States of America, a few decades from now, undergoes a major shift within its borders as global warming makes the rising oceans engulf all the coastal cities, including Washington D.C. as the capital gets relocated inland to Columbus, Ohio. The entire Florida peninsula is submerged by the Caribbean Sea. Most of the American Southwest falls back into the hands of Mexico again.

Because of a number of energy shortages and climate change, the North and South are embroiled in a brutal Second American Civil War by 2074, due to the secessionist Free Southern State – encompassing Mississippi, Alabama and Georgia; otherwise known as “The Mag” – refusal to give up fossil fuels.

Born into this time period is one Sarat Chestnut (actually Sara T. Chestnut, but adopted the added “t” to her name since she was six), whose home of Louisiana is half-submerged by the Gulf of Mexico and by the unfortunate circumstances of war, her family become refugees at the northern Camp Patience straddling between the borders of United States and the Free Southern State with her mother, older brother Simon and her twin sister Dana.

In the sprawling tent city, Sarat grows up under the constant threat of unmanned rogue drones that can rain missiles down without warning or prejudice and the two armies staring each other down intensively. There she meets one Albert Gaines, a mystery figure who shows her how the world was a much different place before she existed which intrigues her and becomes his ingénue. By the time another tragedy strikes, Sarat turns into an avenging angel for the Southern cause in ways that will change a nation forever.

A former veteran investigative journalist for The Globe and Mail who has seen his fair share of war correspondence, El Akkad spins a highly intriguing tale of war, sacrifice, geopolitics and family that isn’t too far gone from the aspects of today’s world, in how people – especially the young – can be so easily seduced into committing acts of violence and terror by the puppet masters wanting to maintain the status quo and those looking to juxtaposition themselves in the larger scheme of things, which is as old as time itself.

These themes aren’t lost here and the characters and pacing that the author creates are just as interesting as the events unfolding provide a necessary cautionary tale of how, even a mighty superpower like America, could easily fall into the category of a failed state in waiting as American War provides within its pages. Highly recommended.

Confined within the Post Office’s Reading Room are the thirteen framed collages of photography and stamps where the artist mixes pop art, photos, stamps and graffiti art to create some very vivid and explicit statements, like the anti-U.S. imperialism rhetoric of “Control (I)” and the Banksy-inspired “Control (Global).”

Selbie understands the usage and power of technology as being the major point of Postgraphy with photography and the first modern postage stamp, which both arrived in the year of 1839-1840 and what they could be used for in regard for tourist scenes, personal photos and illustrated images, as much as it does on socio-political art forms.

The power of sports and religious iconography (“Infectious”), a very stated comment on the military-industrial complex (“Traitors”) and even the questioning of cultural appropriation (“Cultural (I)” and “(II)”) are done in broad and swift brushstrokes here in a subversively delicious manner as well as it being a tribute to a somewhat dying form of communication.

Sticking out in the middle of the expansive corridor at the downtown corporate building space of Brookfield Place are these two large 11x6x6’ and 9x10x8’ as created by Montréal-based artist Valérie Blass from assemblages of her recent photo work “Bleached Jeans” and “One Piece Mohair” turned into the purposely jut-edged commissioned sculptures Nous ne somme pas des héros – “We are not heroes” – of couples in oft-suggestive positions that make the Twister game look tame in comparison.

Here Blass makes them as unapologetic and unabashed as they should be, as far as public installations go, about open displays of affection and shared activity for its constructive mannerism are bold and direct, yet intimate and imposing all at once.

On display since CONTACT 2015, the 37x144’ inkjet print on vinyl Best Beach has its final (?) year residency mounted along the block-long Harbourfront area hotel building made by Winnipeg artist Sarah Anne Johnson of a shot of some unnamed Toronto beach imposed with whimsical patterns of colourful dream-catchers that bleed downwards on the canvas is a playful setting near the lakeshore, to remind one that photography doesn’t always have to be so serious.

Taking up three sides of the Bill Boyle Artsport Parking Pavilion near Ontario Square, Johan Hallberg-Campbell captures the northern extremities of the natural and human worlds of his ongoing Coastal series, most notably with a lovely erosion of greenery over a long-decayed Haida canoe on the forestry floor (“Pacific, Vancouver Island, British Columbia”), a colony of huskies in kennels (“Arctic, Tuktoyaktuk, Northwest Territories”) and a lone defiant stand of a Mi’kmaq settlement – check out the draped pirate flag – despite it slowly being swallowed by the Atlantic waters (“Atlantic, Lennox Island, Prince Edward Island”); showing the impermanence of all things through time and environmental factors.

This 19x31’ inkjet print on vinyl photo of a painting may not be the most original idea, but Hupfield’s photo of her late artist mother Peggy Milller’s oil painting of the choppy waves of Lake Ontario partly draped by a large fabric covering on the southern façade of the Power Plant suggests more to what she wants to bring across about memory and mother-daughter relationships, as well as giving the viewer two different ways of looking at both artists, worlds and mediums.

As part of his ongoing series on documenting Canadian Chinatowns, Morris Lum takes the focus of Tong Yam Gaai (Cantonese for Chinatown) at the country’s largest and best-known – second to Toronto’s main Chinatown – and its painful succumbing to gentrification and development after more than a century of existence, that even these historical places aren’t immune to.

What must be the saddest photo of all are his shots of the gorgeous “Lao-tzu Mural,” which was commissioned back in 2010 for the area’s 125th anniversary; is currently being blocked over by a condo development space is a most telling one as it slowly but surely disappears behind the construction boarding. The companion photo next to it is a building that had existed since the area’s early beginnings gets one last picture taken before its demolished due to its compromised structure due to nearby construction of another building that had, until then, was a affordable home for seniors who lived there for generations and had headquartered a local benevolent society.

Considering what is now happening in Vancouver’s Chinatown, perhaps this telling and informative exhibit is to alert ourselves to be wary of the plans for condo space already drawn up in our own Chinatown areas. So much for gratitude to a visible community that got extremely little or no thanks at all in helping to build this country.

For their sixth annual Sound Image group exhibition, the city’s only gallery dedicated to music photojournalism and imagery brought out a large slice of local, national and international photographers of both professional and amateur persuasions at Analogue Gallery of candid and casual photos of songsters and musicians that could easily make it into Rolling Stone Magazine as anyone else of their ilk.

There was a slight concentration of photos depicting Tragically Hip’s Gord Downie on the band’s (highly possible) farewell tour and final concert in their hometown of Kingston last summer, with the onset of their frontman’s incurable brain cancer, in his now-iconic top hat were the popular ones chosen for the exhibit. While the importance of this event in Canadian music history had precedence, there were other worthy photos on view; like Eric Fefferman’s “Buddy Guy” at Chicago’s Legends is caught in the bluesman’s element in bright colours to the anguished embodiment of a life and career struggled in “Charles Bradley,” as caught by Gideon Greenbaum-Shinder’s lens.

While a few shots of the well-known from Ronda Benjamin’s 2007 pic of Amy Winehouse’s final Toronto appearance at the Mod Club rich in reds and purples to the black-and-white partial graininess of Foo Fighters’ Dave Grohl standing atop a eight-foot speaker stack during a concert date at Air Canada Centre in 2011 sees the raw energy it exudes snapped by Dustin Rabin, there are some gems about like the one-shot supergroup The Good, The Bad and The Queen, as fronted by Blur’s Damon Albarn and The Clash’s Paul Simonon; taken by Gaelle Beri at the 2007 Eurockéennes de Belfort Festival in France of Simonon doing his signature bass “machine gun” gesture to the audience while Albarn looks on to the intensiveness seen in Neil Van’s “FKA Twigs” in her full tribal woman warrior mode that could make even Wonder Woman jealous.

But if you want to see one of the best ones of the exhibit, do check out Brad LeMee’s “The Ugly.” Taken in 1978 and billed by the photographer as Toronto’s most notorious punk band of the late 1970s, but quickly and sadly faded into obscurity without so much as a recording deal to their name. However, the photo in all its black and white glory says it all in screaming gravitas all over with its aura of rebel coolness.

CONTACT 2017 currently running through May 31. Most venues are FREE. For information, call 416-539-9595 or visit scotiabankcontactphoto.com.