For their third Toronto appearance in five years, the Eifman Ballet St. Petersburg Company brought their darkest production to date at the Sony Centre stage with Red Giselle for a three-night run, loosely based on the life of early 20th-century Russian ballet star Olga Spessivtseva, that was nothing short of grand in telling a story about creativity, revolution and downfall, even with its unevenness it manages to captivate its audience well.

In the two-hour dance creation, we follow Spessivtseva – known only as the Ballerina (Maria Abashova) – in her early days at a Petrograd ballet dance studio where her Teacher (Oleg Markov) drills her accordingly, but sees something unique in the young dancer budding under his tutelage. Her talent and beauty also brings the attention of The Commissar (Igor Subbotin) to which she’s drawn into a complicated vortex of power and prestige, tearing her loyalties between the two men.

When the Russian Revolution comes and the arts falling under the control of the new regime to stifle free creativity, the Ballerina uses her influence to let her leave for the West. While in Parisian exile, she tries to adjust to her newfound freedoms that overwhelm her, despite pairing with the Partner (Oleg Gabyshev) at the Grand Opéra who doesn’t share the same feelings for her as she does. Weighed heavily by unrequited love and an unbearable solitude, she psychologically plunges into a depressive state of flux that not even her signature dance in Giselle can bring her back from.

It’s heavy and heady stuff for a ballet (even by Russian standards), yet Red Giselle ’s nuances work when it does under the music of Tchaikovsky and Bizet, but not so much when they start using Alfred Schnittke’s works, like near the end of Act I where his “Gogol Suite: The Portrait” defines the beginning of the Ballerina’s exit from Russia and trying to untangle herself from the grip of the Bolsheviks is a convoluted choice.

Nevertheless, it shines greatly in the duets, solos and ensemble pieces throughout. Highlights of those moments come from Eifman’s choreography of mixing boisterous Russian folk dance scene to Tchaikovsky’s “Elegy in memory of Samarin” and Schnittke’s “Ritual” for the impending Revolution during Act I and the unusual, but brilliant usage of jazz ballet during the Parisian nightclub scene of the 1920s in Act II.

Abashova and Subbotin put on exceptional performances here in their execution of steps and roles, while you can feel a sense of homoeroticism being built up in Act II when Gabyshev and Dmitry Krylov engage in a veiled dance of jealousy between them and the Ballerina to be quite convincing. The elaborate sets and costuming of Vyacheslav Okunev are exquisite from the softer pastels of the Paris ballet company’s dance outfits and the sharp flapper dresses to the light blue hues bathing the Petrograd dance studio heightening the innocence and grace of young prima donnas in training.

Red Giselle will appease the Russian ballet fans for all its dramatics and boldness of incorporated Western dances like the Charleston snuck in that doesn’t feel out of place, regardless of the jazzy swing or overusing Schnittke to emphasize the ballet’s tragic undercurrents. Still, it’s a noble and worthy production Eifman Ballet puts on about the agony and price creativity sometimes pays. 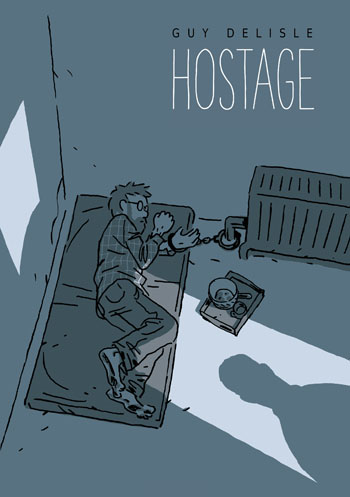 by Guy Delisle; Translated from French by Helge Dascher

After building his career on travelogues and the chaotic misadventures of parenthood centered around himself, noted Canadian cartoonist/illustrator Guy Delisle takes a full turnaround in topic and artistry for his long-awaited Hostage, based on the true-life kidnapping of a humanitarian relief worker unexpectedly made a pawn in a complex politics of the (still) unstable Caucasus region and his will to survive it.

Christophe André, who was working as a financial administrator in the Russian Republic of Ingushetia for Médicins sans Frontières (Doctors Without Borders) three months into his first overseas assignment, was dragged from his own bed in the middle of the night on July 2, 1997 by armed men claiming to be the local police. Believing them to be thieves after the pay in the office safe at first, André soon found himself crossing into the semi-lawless Republic of Chechnya and handcuffed to a radiator for the next one hundred and eleven days in solitary confinement.

With an unlit ceiling light bulb as his only company and his abductors speaking only in Chechen and/or Russian, he isn’t treated with any sense of physical cruelty or outward threats of violence, despite the fact he was being held for ransom. In that time period, André tries not to succumb to the depression, boredom and anxiety over his fate as his employers try to negotiate for his safe return that grips him from time to time, while he dreams of escaping his situation in a strange country that may or may not be sympathetic to his predicament. 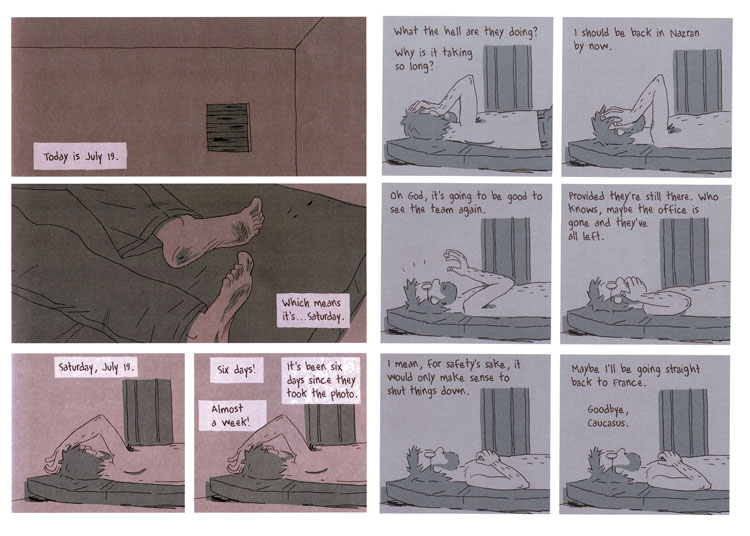 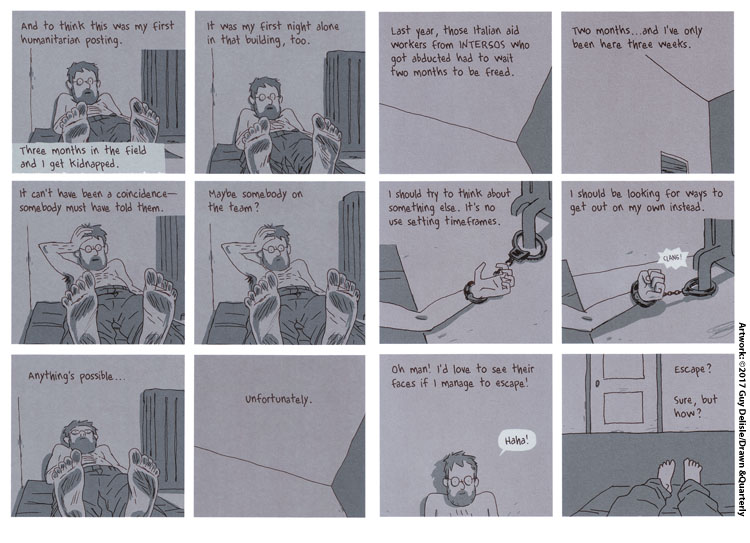 Twenty years after these events, Delisle delivers another masterful work that captures the mood and intensity of experience through his subject’s perspective of being kidnapped for unknown reasons and facing uncertainty in the anguish of a long drawn-out situation many of us could find unthinkable – or unbearable to fathom. Done in a two-colour fashion and a different drawing style unlike his more light-hearted cartoon style yet still stuck to detail, its various shades of greys and earth tones fit the mood swings of André’s three-month endurance that makes him appreciate the littlest of things we take for granted, like a slight menu change of a diet of watery vegetable soup to a rare ray of sunshine on his face that makes his ordeal a little lighter, if only for the briefest of moments.

Hostage is a real testimony of human endeavour mentally tested to keep hope alive in one’s darkest of hours only Delisle could recreate with a sense of honour and dignity without turning his subject into a complete victim of circumstance right up to the final pages. Already one of this year’s best graphic novels.

Sweet honey in the rock(s of Ryerson)

Shelley Niro: Battlefields of my Ancestors

Six of the twenty-two series of 3x4’ photos of Shelley Niro’s continuous examination of the Indigenous experience of the Americas gives a reminder of our home on Native land with Battlefield of my Ancestors. Niro, herself of the Mohawk Nation, not surprisingly points out grim accounts of genocide (“Cayuga Lake”, “Sullivan Campaign”), the existence of various homelands (“Mouth of the Grand Port Maitland”) or the intrusion of modernization via hydroelectric towers and wires (“Grand River”).

It should be noted as these photos are based near the statue of the institute’s founder, Egerton Ryerson, who not only established Ontario’s educational system in the province’s early beginnings, but was also the architect the Native residential school system that sought to assimilate and erase First Nations culture. While a more than appropriate site for a display to point out the stain on our national conscience, the exhibit shows how much has changed here in the short 150 years we’ve existed as a country; but at times can recognize the natural beauty of our environs (“Tutela Heights”, “Mohawk River”).

Battlefields of my Ancestors also continues at the Fort York National Historical Site (250 Fort York Boulevard) through May 28.

An ongoing project since 2012, the current façade looks at our national iconic figures from Pierre Elliot Trudeau to Oscar Peterson out from 25,000 files from the New York Times photo archives of fourteen familiar faces as assembled by Kelsey Blackwell done on 18x133’ black and white inkjet prints. It’s one of those moments we can be proud of ourselves, the positivistic influence and presence we’ve brought upon ourselves and the world stage at large during our sesquicentennial.

Adhered to three of the two billion year-old boulders from the Canadian Shield that dot Ryerson University’s campus pond, Saskatoon-based Cree/Saulteaux/Métis artist Lori Blondeau has Asiniy Iskwew – “Rock Woman” in Cree – of three large inkjet on vinyl photos of a First Nations woman draped in red standing atop boulders near a man-made lake in Saskatchewan that, in a sheer sense of irony, was created by the provincial government in 1966 by dynamiting a sacred First Nations gathering place.

Instead of being seen as victimized, the figure is shown as a defiant and strong woman and gives it a connected moment of pause to the also artificial pond here in the downtown Toronto area is very much in touch with the balance of nature and her place in society, as the title suggests, remains unmovable still.

CONTACT 2017 currently running through May 31. Most venues are FREE. For information, call 416-539-9595 or visit scotiabankcontactphoto.com.