Having recently read a non-fiction book on the French Revolution and its effects on the citizenry of the period, along with viewing the 1965 Peter Weiss’ musical play Marat/Sade or The Persecution and Assassination of Jean-Paul Marat as Performed by The Inmates of the Asylum of Charenton Under the Direction of the Marquis de Sade and its translation by Geoffrey Skelton put on by the Soulpepper troupe, demonstrates the old adage that every revolution devours its own children.

Encaged within a staging to get that feel of imprisonment of its theme and ideas, the warden of the Charenton Asylum (C. David Johnson) allows Marquis de Sade (Diego Matamoros) to guide and examine the events leading up to the infamous assassination of one of the French Revolution’s brightest voices Jean-Paul Marat (Stuart Hughes), when Charlotte Corday (Katherine Gauthier) stabbed him to death in his bathtub on July 13, 1808; as put on by the prisoners of the institution.

France is still in the throes of revolutionary fervour and the Reign of Terror under Robespierre was underway, with the rest of Europe looking uneasily along. Marat constantly in pain with his skin condition that mostly confines him to his bathtub, writes and obsesses with the nation’s struggling democratic movement in order to define its character.

As a mentally fragile Corday arrives into Paris from the countryside, along with the lusty Duperret (Gregory Prest) looking to confront Marat about his wordings that have wracked havoc in her provincial town, the two philosopher kings confront the debates of the day of how anarchy was running roughshod across the country with Marat justifying some of it as a means against the privileged bourgeois it targeted while de Sade stands on his righteous pedestal arguing these incidents as nothing more than mob mentality with little or no care for the national motto of liberté, égalité and fraternité and laments on the extremities of human nature carried away by the moment.

Marat/Sade’s a dead-on satire of musical/comedy theatre-meets-historical courtroom drama as accompanied by Mike Ross’ score of 1960s and ‘70s pop theatrical songbook with the scorch of punk underneath is a neat blend of what revolutionary theatre should sound like, including Kevin Lamotte’s unpredictable lighting designs fitting in here and the costume designs of Anahita Dehbonehie standing on their own.

Hughes and Matamoros square off well as the titular rivals talking about the limits of a populist revolution, especially for the former who spends most of the play soaking in a tub is quite an endurance; Frank Cox-O’Connell makes great as rebellious priest Jaques Roux preaching liberation theology well way ahead of his time and Gauthier as the destined assassin with a sleeping disorder is fun and enthralling to watch her mood swings unfold the course of history while Johnson’s warder looks on as a watchdog and judge with believable unease in keeping the order of a madhouse.

A child of the ‘60s it may be, Marat/Sade still has those timeless ideas that linger fifty years after its London West End (via Germany) debut on these changing times as we’ve seen in this decade so far from the Middle Eastern Arab Spring to Hong Kong’s Occupy Central movements about the discontent of promises for a better society have yet to be delivered as directed by Albert Schultz of this counterculture classic sustaining its radical nature is more rousing than Les Misérables could ever pull off in this two-and-a-half hour musical, given that its only fault is the first-act stretch going on a bit long to wait for, yet worth it. A must-see.

Expanding now to an 11-day event from October 22 to November 1, the International Festival of Authors (IFOA) marks its 36th edition of literary greats and newbies coming together at Harbourfront with 150 authors from 21 countries with a special focus this year on authors from Spain’s Catalan region and a 800-year old document that without it, the right of the written word would not exist in today’s society.

“We’ll be showcasing work from the Catalan region [and] its capital being Barcelona,” IFOA Artistic Director Geoffrey E. Taylor explains. “Catalan literature is something most Torontonians know little about. We hope that they’ll choose to explore and learn more about the brilliant artists who write it. This will be an adventure for us all.” The said writers Anna Aguilar-Amat, Flavia Company, Marc Pastor, Jordi Puntí, Toni Sala, Martí Sales, Francesc Serés and Teresa Solana will participate in a series of readings, round tables, interviews and a number of special events, all offering essential insight into their influences and the rich cultural life of Catalonia.

The Director of Barcelona’s Insitut Ramon Llull, Àlex Susanna, agrees with Taylor’s choice in the invitation to IFOA. “We have such a diverse, original and unpredictable literary scene in Catalonia – and so much Catalan literature is now being translated into English,” he said. “This focus at the IFOA is a wonderful opportunity for Canadian audiences to be introduced to some of the best Catalan novelists, poets, translators and crime-story writers.”

Other events include the Magna Carta on its Canadian tour currently viewing at Toronto’s Fort York (through November 7; 250 Fort York Boulevard), where the fest will host IFOA@Magna Carta and the Modern World with Dr. Carolyn Harris giving a talk on the importance of this document in connection with present-day literature on October 22; CBC Radio’s literary forum Writers & Company celebrates a quarter-century on the air with a special gathering with its host Eleanor Wachtel with critically acclaimed authors Aleksandar Hemon, Caryl Phillips and Zadie Smith joining in the conversation on the importance of the radio programme to the national and international literary scene on October 28 and a tribute to Canadian literary giant Austin Clarke on November 1.

And this year’s winner of the annual Harbourfront Festival Prize goes to noted Canadian publisher Avie Bennett, who’s made household names out of Margaret Atwood, Leonard Cohen, Rohinton Mistry, W.O. Mitchell, Alice Munro and Michael Ondaatje, will receive the award before the event celebrating the finalists for the Governor General’s Award for Literary Fiction at the Fleck Dance Theatre on October 26.

In choosing Bennett for the award along with Toronto Star Books Editor Deborah Dundas and CBC Radio personality Carol Off, Taylor said: “Winning this award places Avie Bennett on a list with many authors he has previously published or nurtured. His name is known and respected in many areas of arts and culture well beyond the literary world. The Prize is a small way of thanking Mr. Bennett for all he has done for IFOA and the publishing community.” 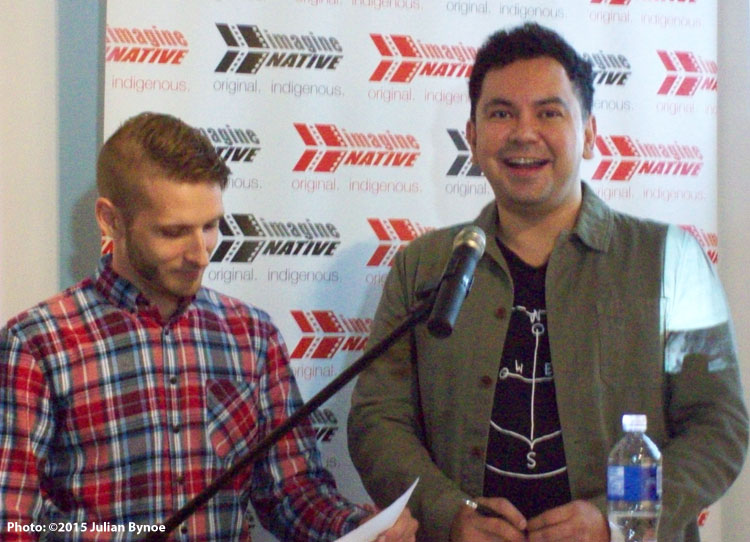 Small as the First Nations creative media community may be in Canada, it looms very large with the help of the imagineNATIVE Film+Media Festival, now entering its sixteenth year of existence in promoting aboriginal film, video, digital and visual arts; not only of the native North American experience but of the entire world from the Asia-Pacifica to this year’s tribal spotlight on the Nordic Sámpi nation stretching across from Scandinavia to the northern reaches of northwest Russia.

As described by festival Manager Daniel Northway-Frank at the media conference at the downtown art gallery A Space on October 2nd of the 181 works from 101 indigenous nations from 19 countries as part of the events, which include 143 films, five audio works, six interactive videogames and six art exhibits across the Toronto area, “It’s incredible when you think of where the festival has grown over the past fifteen to sixteen years, as where we are today.

“We’ve had a record number of submissions to imagineNATIVE this year and I think back to those early days when, as a new festival [back in 2000]; we actually went out and sought out as much new work as we could and program pretty much anything we could into the festival! And over the past ten years, I’d say programming really has been one of the most difficult aspects of the job, as well as one of the most rewarding. We obviously we get more work than we can actually program into the festival. I think the programming this year, was particularly difficult [in choosing the entries].” 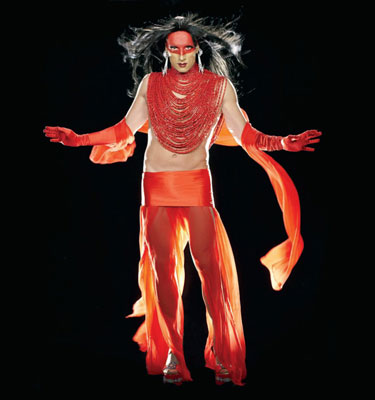 The little-known Sámi nation will get its overdue spotlight with the pioneering historical-revenge feature Pathfinder (October 15) that earned a 1987 Academy Award Best Foreign Language nomination and 7 Sami Stories programmes (October 16 and 18) of their best Sámi language shorts from 1991 to the present with the pantomime forbidden gay love story The Spiritual Kiss, Finnish cartoon Quite a Ugly Frog, Norweigan drama Burning Sun to Swedish doc My Grandmother and I.

New to this year’s fest is the introduction of the August Schellenberg Award of Excellence going to a First Nations performer of exceptional merit and the organizers were proud to give it to veteran actor Tantoo Cardinal, whom she worked with on the 1991 film Black Robe; who will accept the award at the free Awards Show presented by APTN on October 17 at TIFF Lightbox.

“When we were talking about the recipient (of the award),” Northway-Frank explained, “we really wanted someone who has made a significant contribution to the craft of acting but also who really left an indelible mark on the indigenous film world, but also on the larger film world internationally. And after a lot of deliberation, it really came down to one person, and we couldn’t think of a better person who embodies the spirit of this award, who also has a really beautiful connection to Augie Schellenberg and also who really, I think in many ways, embodies the history of contemporary indigenous cinema.” 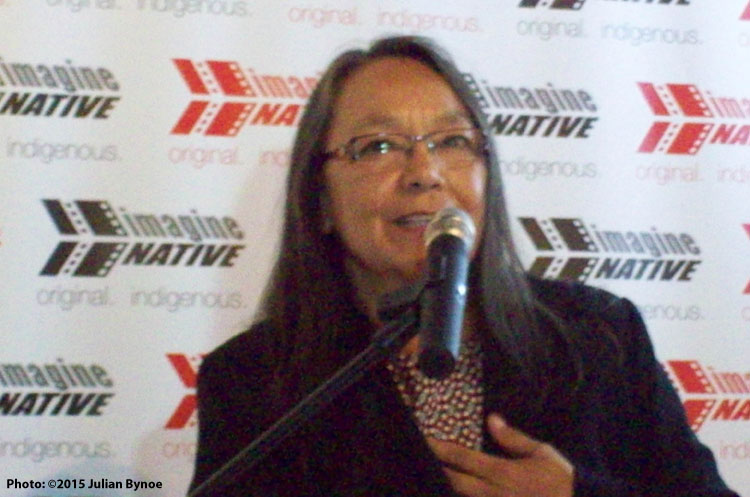 Legendary Métis actor Tantoo Cardinal at imagineNATIVE Film+Media Festival 2015 media conference October 2 discusses being the first recipient of the August Schellenberg Award of Excellence, in honour of the Canadian First Nations actor who died in 2013.

Giving a heartfelt speech at the media conference on her personal memories on the late legendary Mohawk actor and of the award, Cardinal said: “I think Augie was out there before I was [starting out] in Saskatoon…and (he) was out there all by himself. Can you imagine how happy he was to see some Indians coming over the hill?

“And he could have easily gone and had a very comfortable career, kind of disappearing into the world of any actor. He didn’t have a slot that he was put into, he could have gone anywhere. He was well established, he could be like when I first met Augie, I remember seeing him playing a lawyer or something like that. And it always touched my heart that he really wanted to make a commitment to our world, so he wanted to honour those roots he was part of. He had so much love for change, for growth for giving all those things and he was so powerful is one word I can think of when it comes to Augie as very principled and very disciplined and wanted to do the best work and wanted everyone around him to be the best that they could be.”

Two particular memories on Schellenberg’s drive and generosity stood out for Cardinal for getting her son into the National Theatre School in Ottawa to helping her during the lean years here in Toronto. “I had a ticket back home and he knew that, so he came sliding by and slipping me a fifty,” she remembered. “And he had a big heart and I don’t like to talk about him as being ‘had,’ as his spirit lives on and so I appreciate imagineNATIVE (and Schellenberg’s daughter) Jenny for the hard work that he’s being remembered and we know the contributions he made to our community and it’s our place to hold him up [to that].”