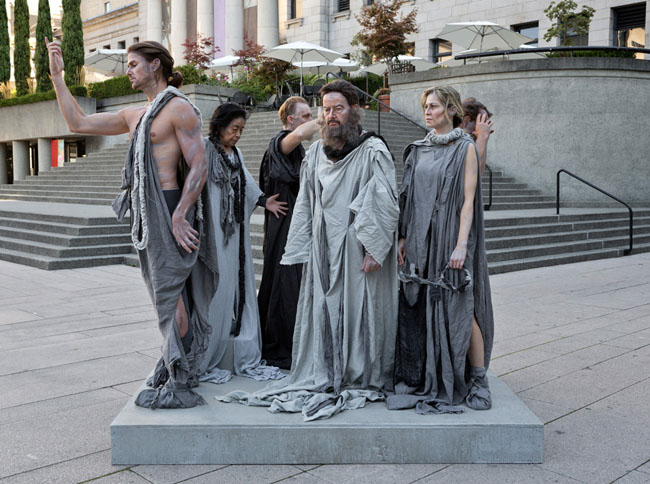 Denis Arcand and Adad Hannah: The Burghers of Vancouver

Since the Great Recession that hit around 2008, the financial world has been looked at under very heavy scrutiny from a jaded majority that bore the brunt of layoffs, stock market calamity and a weakening of the middle class – and continue to do so – which gave way to the Occupy Wall Street Movement to, more recent times, the Panama Papers. Perhaps this is what the six-channel travelling 2015 video installation The Burghers of Vancouver is trying to convey and it does so well in exposing the eternal greed that exist within the human breast.

A collaborative effort of two respected Canadian artists, the Québécois filmmaker Denis Arcand, better noted for films Jésus du Montréal and the Academy Award-winning The Barbarian Invasions; and photographer/video artist Adad Hannah have taken the Auguste Rodin bronze masterpiece “Les Bourgeois de Calais” and given it a contemporary twist as a performance art piece shot near at a urban plaza in downtown Vancouver using “amateur” actors to pose as a recreation of the figures and sandwiching segments of the real statue located in Paris in the six stand-alone screen panels of each member daily routine from rising up, doing the paid gig from a anonymous employer and returning to their homes at night.

Each nameless member come from all walks of life: a poet, a elderly Asian woman, one ex-junkie, a athlete, a laid-off journeyman and a former smuggler; whom for two weeks come together to stand the same positions in ragged costumes and makeup with a few eye blinks and subtle body twitches, enduring disinterested passers-by (except for a few mockers) and the elements for hours on end.

The installation preparation of The Burghers of Vancouver at the Canadian Cultural Centre in Paris.

In the stand-alone panels, most of them discuss their lot in life from the journeyman feeling bitter about his job prospects at his age and unable to cope with the new economic reality; the fragile ex-junkie struggling to stay clean, trying to find her place in society and learning to trust again; the poet coping with the recent death of his wife and the loss he feels without her and his direction while getting the artistic aspect of the project; the elderly Asian living with her tween granddaughter and speaking Cantonese throughout; the chiselled francophone athlete throwing himself completely into his role to sate his ego, if nothing else and the well-fit ex-smuggler in his fifties seeing the darker side of what the project is really about as him being the little fish who got caught with the filthy lucre.

The artists put on a delicate balance of art and statement in the videos, which each run for about less than under ten minutes in contrast of what the original “Burghers” was about when Rodin was commissioned by Calais in 1884 and finished in 1889 to commemorate an event there during the Hundred Years’ War, as British forces surrounded the French seaside town of Calais and demanded the six of the town’s powerful mercantile figures to be handed over to them to spare the citizenry from a possible onslaught, which they complied and saved their citizens and themselves for the common good.

As the ex-smuggler amusingly points this out as well in his segment, he is sceptical that anyone in the corporatized world of today would do the same situation if given the chance to do something that completely selfless as a laugh in a rich town like Vancouver (or anywhere), as some of his fellow artisans speak on being the one-percent getting the scant leftovers and hardships that follow every downturn. The viewer also gets to read the body language of the profilers as an extensive exercise without the benefit of subtitles, as seen with the athlete and Asian woman, who one can easily see her fatigue in being statuesque all day afterwards.

TIFF Lightbox’s tiny CIBC Gallery space fits the piece fine, despite that the sound bites from the speakers could be a bit better and clearer volume-wise to be able to pick up their words. It’s also a keen observance that Arcand and Hannah do not ever let the actors mingle together before, during and after and keeps them complete strangers to each other in The Burghers of Vancouver as just faces in the crowd that find a temporary commonality in a uncertain future filled with instability as subversive and provocative urban public art, just like the original was over a century ago.

Gould Award gets a touch of Glass

Among the great composers of the last century, Philip Glass defies description from his neo-classical works for cinema like Kundun, The Hours and Koyaanisqatsi to the stage with The Voyage and his operatic magnum opus Einstein on the Beach which was performed at Luminato a few years back for its fortieth anniversary, including a world premiere piece on The Americas; and working with many of the music, stage and film world’s distinguished members such as Laurie Anderson, David Byrne, Yo-Yo Ma, Martin Scorsese, Ravi Shankar, Twyla Tharp and David Bowie. He’s even been parodied in the first season of South Park ’s “Mr. Hankey, the Christmas Poo” with the kids doing a “happy, non-offensive, non-denominational Christmas Play” with them dancing around in black costumes to a minimalist song he performs himself and the comedy troupe All in the Timing’s “Phillip Glass Buys a Loaf of Bread” that still can illicit laughs, showing his position in pop culture.

“Our jury has made a brilliant choice in selecting Philip Glass,” said Levine. “At the start of his career his music was seen as radical and even derided for being contrary to the prevailing musical current, but his work advanced solidly until it permeated our cultural consciousness; it has exerted a profound influence on a whole generation of composers, filmmakers, dramatists and operatic directors. In his work and life, he reveals himself to be a man of deep spirituality and conscience as reflected in the themes of his operatic creations and film scores. We are honoured to present the Prize to an artist of such originality, conviction and vision.”

“I am thrilled with our choice of Laureate,” echoed Bob Ezrin, the chair of the Glenn Gould Prize Jury. “Philip Glass is one of the towering figures of modern music. With an iconic career that has spanned fifty years, his body of work is unrivalled in its breadth and depth. He not only helped to reclaim tonality as a vital force in serious music, he took minimalism and brought it from the fringes of the avant-garde to the mainstream where it has literally provided the subscore to most of our lives. We hear his music and music he has influenced on stage and screen – virtually everywhere. Finally, he is a man of principle and deep spirituality who has used his art to help elevate humanity. On behalf of the jury, I can say that we couldn’t be more proud of this decision.”

“I am very pleased to be the winner of the Eleventh Glenn Gould Prize,” Glass commented upon hearing his award. “It is for me a special honour as I am one of the many musicians who have been inspired by him. Glenn Gould’s name is associated with a lifetime of excellence in music interpretation and performance. Also I am aware that this award places me in the company of some of the most celebrated names in the broad spectrum of the music of our time. It is, therefore, with great pleasure that I accept this award.”

Along with $100,000 cash award and a statue by Canadian artist Ruth Abernethy, Glass also was given the choice of selecting the City of Toronto Glenn Gould Protégé Prize given to an artist of great promise, which goes to fellow pianist and composer Timo Andres. Already into his young career at age 31, the Yale- and Juilliard-educated Andres has done commission work for Carnegie Hall, the Los Angeles Chamber Orchestra, the Los Angeles Philharmonic Orchestra and the Orpheus Chamber Orchestra, plus two recordings under the Nonesuch label, 2010’s Shy and Mighty and 2013’s Home Stretch.

American pianist/composer Timo Andres at his New York apartment, to be given the City of Toronto Glenn Gould Protégé Prize by Glenn Gould Prize laurete Philip Glass at a concert in his honour this November in Ottawa.

“I’ve known Timo Andres for the last four to five years, both as a composer and performer,” Glass said in his decision to recognize Andres with the prize. “He is one of the regular performers on the Etudes project. He combines a brilliant compositional mind with a wonderful sense of interpretation of music. I am very pleased to have him present in this very special way at this concert.”

At Ottawa’s National Arts Centre (NAC), the NAC Orchestra concert will putting on a special musical program on November 26 at its Southam Hall (53 Elgin Street), The Genius of Philip Glass, where the ensemble will play highlighted selections of Glass’ symphonic, chamber ensemble and solo piano works that will include his “Symphony #2,” conducted by noted conductor Dennis Russell Davies; followed by Andres’ performance where Glass will reward him with the Protégé Prize and its $15,000 purse award afterwards.

Tickets now on sale for the November 26th concert. For more information, visit glenngould.ca or nac-can.ca.